These days, Phil Collins can no longer play the drums. Since 2007, he’s been suffering from nerve damage to his elbow. Despite undergoing surgery, he explains, he has two numb fingers on his left hand and cannot grip a drumstick. “I joined Genesis when I was 19,” he says. “I’m 63 now, I’ve played drums all my life. I don’t miss it. It’d be nice to have the choice, but I don’t miss it.” Collins’ injuries, he concedes, are one critical reason why the 1971 – 1975 line-up of Genesis could never reunite again. “There’s this incessant desire for it to happen,” he acknowledges. “But I often think, ‘Have people thought it through?’ It’s not as if you’re going to get Peter as the singer, me as the drummer. I can’t play any more, so it’s never going to happen. But even if it could, you’re not going get Peter singing ‘I Can’t Dance’ or ‘Invisible Touch’ or ‘Tonight, Tonight, Tonight’ or ‘Mama’.”

Do the band feel that they were trying to escape the shadow of the Gabriel era during the Collins’ years?

“No, I don’t think so anymore than Peter was trying to escape the shadow of us,” counters Tony Banks. “It’s just what you did. Peter’s music became much more streamlined and harmonically a lot simpler in the later years. I’ve always tried to keep a few rambling moments in Genesis. Things like ‘Domino’, ‘Home By The Sea’ and ‘Drive The Last Spike’, and I think they are very much part of Genesis’ character. Funnily enough, up on stage they proved to be some of the most successful songs.”

“I think I’m still regarded as the new singer,” laughs Collins. “I’ve been here 40 years as singer. ‘74/75 I took over the singing and I’m still thought of to be the new guy. It doesn’t frustrate me. I just find it kind of comical. But yeah, what is the difference between ‘I Can’t Dance’ and ‘Sledgehammer’? We’ll never know.”

“You’ve got to remember, while we were doing things like The Lamb…, we were generally unloved,” explains Banks. “We didn’t get much support at the time. Tribute bands like The Musical Box, they get far bigger audiences than we ever did then. It’s a funny thing, nostalgia. It’s interesting, the music we made in the early 70’s. It’s not really like anything else. Whereas some of those things we did in the Eighties – really good pop songs, but not so dissimilar from what else was going on. That’s why I like things like ‘Domino’ and ‘Home By The Sea’, because they couldn’t be done by another band.”

“I was a lot easier to understand than Peter, but less interesting,” admits Collins. “I won’t have it any other way. I was far less interesting and that’s added to his mystique as a personality and all the stuff he does. I’m far too normal, I’m far too… I hate to say it, but I am far too middle of the road and far more showbizzy than Pete was. That enhances the mystique about those early years. I used to think, because of my background in stage school, I was the closest to all those nasty words: ‘middle of the road’, ‘show business’, ‘Max Bygraves’. I guess I’m not that far away, when you look back on it.” 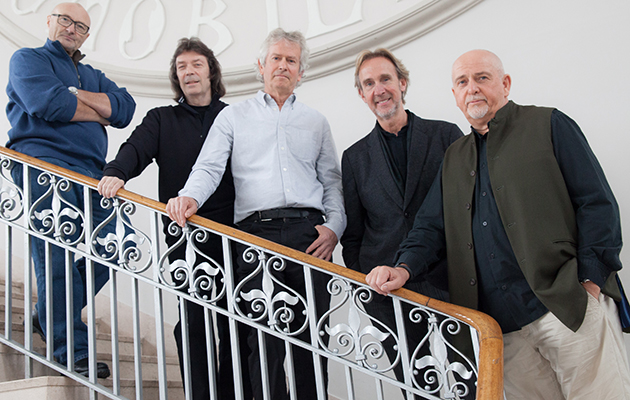 Although not a fan of The Lamb Lies Down On Broadway – a consensual Gabriel-era peak – Tony Banks remembers being pleasantly surprised when he went to see tribute band The Musical Box perform the album live. “I crept into the Albert Hall to watch them play it,” he reveals. “It was interesting. The trouble is, they’re using the old show that in this day and age looks very dark and a little bit strange. When it was good, it was great. I thought ‘Back In New York City’ sounded great. The best moment for me was when they did ‘The Musical Box’ as an encore and I though that was a lot better. The Lamb is always a bit of a funny album for me. I never felt that it really concluded very well. I thought the song ‘It’ was not very strong ender and so I have a slightly funny feeling about it all. But they did a grand job.”

Tony Banks pauses for a second, then reflects on the experience of watching his former schoolfriend and closest collaborator impersonated on stage. “At times, the guy doing Peter was uncanny,” he considers. “From the distance, I thought it pretty good, really. The mannerisms of speech, his stuttering. It was really quite funny.”