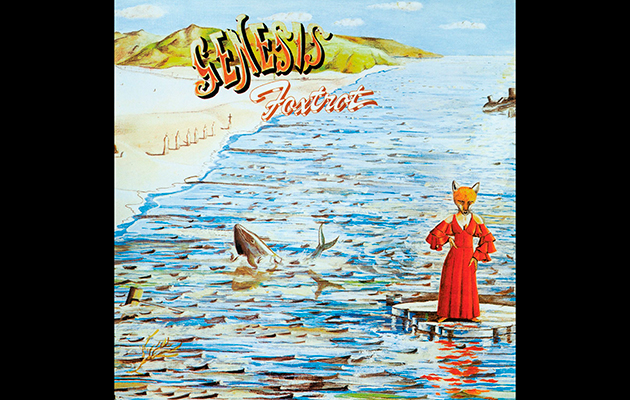 It’s a warm September afternoon in 2014, and Phil Collins and Mike Rutherford are sitting in the rooftop suite of an up-market New York hotel. Looking out of the window at the traffic cruising along the city’s Midtown district, Rutherford – dressed in regulation off-duty rock star casual wear of a white t-shirt and dark trousers – is reminiscing about Genesis earliest shows in America, in December, 1972.

“It was a lunchtime concert at Brandeis University, which was a disaster,” he confides with a theatrical moan.

“We had a manager, Ed Goodgold, who managed Sha Na Na,” continues Collins. “He was great, gift of the gab. He said ‘We’re gonna do a warm up show, so we’re playing Boston.’ It was a lunchtime gig. People were studying and eating and we were doing our show. That probably involved a flower mask in some shape or form. It must have been in broad sunshine. We thought when we left, ‘Are you sure? Are you sure this Boston? Because they’re supposed to like English bands.’”

“We came here, then, to New York for a Christmas show, one performance at the Philharmonic, WNEW,” adds Rutherford. “We’d all seen New York in films. It was so exciting. We must have been… what age were we? 21, 22? Mind-blowing really. I remember staying at The Gorham Hotel not far from here and within five minutes of checking into our rooms, the phone rang and the receptionist said ‘There’s a guy in the building with a gun, keep your doors locked.’ I was straight out the corridor going ‘This is great! This is exciting!’ There was danger in the city, it was great.”

Collins and Rutherford are here ostensibly to talk about R-Kive, the band’s eighth box set compilation. The material presented here chronologically spans the band’s career; although it omits material from their 1969 debut album, From Genesis To Revelation, it nevertheless gives equal weight to songs from the principal members solo careers. In tandem with a new BBC documentary, Genesis – Sum Of The Parts, R-Kive attempts to present the band’s often-convoluted history as a coherent, linear narrative.

“The comparison I have is Monty Python,” explains Collins. “Fawlty Towers, Ripping Yarns, Spamalot, Terry Gilliam’s films and Michael Palin’s travel programmes, they all came from the same place, this comedy group. It’s a similar idea with all the music that’s come out of the Genesis mother ship, the solo careers. You know people don’t know that Pete was in Genesis? A lot of people don’t know I play the drums. They join your career on ‘One More Night’ and the rest, whatever happened before, they’re not really too sure about.”

But perhaps more than anything, R-Kive reinforces the notion that Genesis are essentially two different bands. On one hand, R-Kive contains a piece like 1973’s “Supper’s Ready” – a bravura 23 minute suite consisting of seven linked sections, one of which is called “Ikhanton And Itsacon And Their Band Of Merry Men” – while on the other, there’s “Illegal Alien”. Both of these are, to some degree, emblematic of the two different sides to Genesis’ musical character. The music of early Genesis – as defined by the band’s classic 1971 – 1975 line-up of Gabriel, Rutherford, Collins, Banks and Hackett – is often quite extraordinary. Eccentric in spirit, it is full of macabre tales, baroque song cycles and shifting time signatures; a bestiary of beheaded schoolboys, alien watchers and fantastical creatures. “We almost put too much into our songs,” laughs Rutherford. “Mythology, science fiction books, fantasy, it was all part of doing English at school, in a sense.” Meanwhile, the music of later Genesis is perceived as slick pop hits, linen suits, knockabout videos; the worst excesses of the Eighties, in other words.

“When I joined the band in 1970, Genesis was a band of songwriters desperate to write hits as well as good songs,” reveals Collins. “They weren’t going to sell out to do it. But there is a huge jump from ‘Supper’s Ready’ to ‘Illegal Alien’, yeah. But I always think of it in simple terms. Look at what you read when you were 20 – like The Hobbit or whatever – and then look at the books you’re reading 20 years later, or what kind of music are you listening to, or what kind of clothes you wear. Because there’s a change. You change and you grow up, that’s part of it.”

“‘Supper’s Ready’, it wasn’t a plan,” admits Rutherford. “We didn’t really hear it until it was chopped together. The first half joined some lovely bits together. Contrasts, colours, ‘Willow Farm’, acoustic stuff, moody atmospheres. That was all going fine. Then into ‘Apocalypse 9/8’. The way Pete sang the vocals on what I always call ‘the home straight’ made it a very strong little piece. ‘With the guards of Magog’. There were so many ideas there. We’d jam ten ideas into three or four minutes, rather than giving the space to develop. Because ‘Supper’s Ready’ was a half hour piece, we were able to give more time to things, like repeating the main theme at the end. The reason we ended up as a three piece was because we had too many ideas for a five piece.”