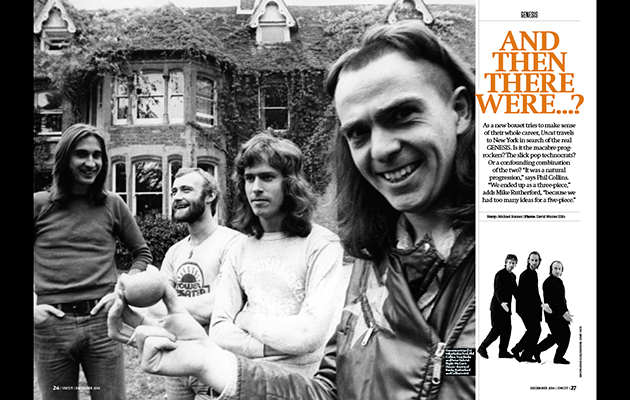 One evening during the summer of 1998, a group of friends met for dinner in the discreet private dining room of a fashionable London restaurant. The mood was warm and convivial and, by all accounts, the meal went on late into the night. Casually dressed, all in their fifties, you might suppose this to be a meeting of senior partners in a business practice celebrating the completion of a successful venture; or, perhaps, former school friends enjoying an old boys reunion.

As it transpires, both of these assumptions are, in their own ways, largely accurate. Over a meal of Japanese food at Nobu, on London’s prestigious Berkeley Square, all former and present members of Genesis convened for the only time in their unusual, labyrinthine history. Ostensibly, it was an opportunity to mark the release of the band’s Archive 1967 – 75 box set; but it also afforded the assembled musicians the chance, in some cases, too meet one another for the first time. Anthony Phillips, the band’s founding guitarist, remembers sitting next to Peter Gabriel for much of the evening hearing all about the academic progress of the singer’s daughters; meanwhile Phillips’ successor, Steve Hackett, recalls swapping right-handed Flamenco guitar techniques with Chris Stewart, the band’s original drummer. Keyboard player Tony Banks, for his part, recalls his wife – a vegetarian – struggling with a menu that consisted principally of meat and raw fish. “At the end of the evening, Tony raised his glass,” Steve Hackett tells Uncut. “I thought he was going to make a toast. Instead, he said, ‘Well, we managed to sack the lot of you!’ It could have been a line from Ripping Yarns. That’s Tony, true to form. I had to laugh…”

Anyone looking for evidence of Genesis’ rather eccentric principles will find plenty in the revelations that emerged from that dinner. On one hand, the gathering of the extended Genesis family served to draw attention to the unusual dichotomy at the heart of their music. After all, to many, Genesis are two distinct bands, defined by the differences between successive front men: Peter Gabriel and Phil Collins. “I think people loved the mystery of those days with Peter,” admits Collins now. “I always think of him as the mysterious traveller in the band, and it all became a lot more normal when I became singer. I was the guy next door and I didn’t cultivate that Mister Mystery, with the masks, the costumes.” But, critically, that night at Nobu also illuminates the cordiality that exists between band members from across all line-ups; a rarity among most rock groups. Essentially, no one has ever been sacked from Genesis; they have simply become consultants. It’s possible this politesse can be traced back to the public school education experienced by all of the band’s founding members; a highly competitive, stiff-upper lip quality, whereby personal matters are not openly talked about and resentment often festers under the surface. “They were the last generation that were bred to be officers and gentlemen,” notes Collins. “All those guys were left like a bit of a loose sail, not knowing quite what to do because that vision for them was already out-dated. They were left all puffed up, but with nowhere to go.”

“They were designed to be builders of empire, which is what happened in rock, in a sense,” observes Steve Hackett. “There was a single-mindedness, a steely-determination from everybody. They were all educated to be able to lead a charge in the Crimea without flinching.”