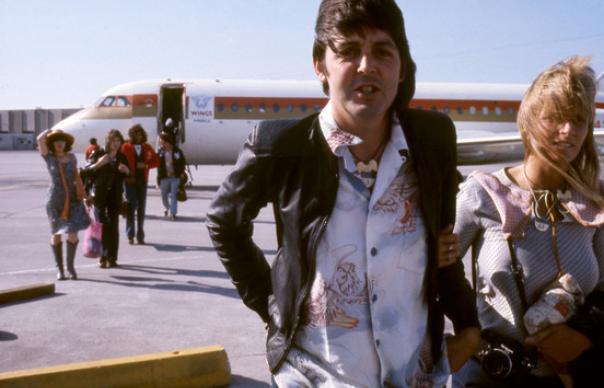 The original Wings Over America was a 28-track, triple-vinyl document of Wings’ first American tour. Dressed in a swish but somewhat anonymous Hipgnosis sleeve depicting a blinding light creeping out of the opening cabin door of a jet airliner, it was released just before Christmas in 1976, reached a creditable No.8 in the UK, and became the fifth successive Wings album to top the Billboard charts. As it hit the shops in Britain, the Sex Pistols were drunkenly swearing their way to infamy on the Today show, and Wings Over America was as symbolic of everything punk was against as a Keith Emerson moog solo.

Now that even vintage punk reissues come dressed up as coffee-table box sets, the latest McCartney-curated version of his first official live album can’t possibly stop at digitally remastered triple vinyl and double CD. The Deluxe Edition box set includes a bonus CD of eight of the same tracks recorded at San Francisco’s Cow Palace, a DVD containing documentary and photo montage, and a book containing more art, liner notes and assorted memorabilia. But the remastering – which unsurprisingly favours Macca’s low end; you won’t hear too many live albums with deeper, richer, better bass than this one – punches home the most important point. Wings were an unbelievably good group of players, capable of perfectly reproducing the studio complexities of songs like “Jet” and “Live And Let Die”, bringing a slick, bright and occasionally savage sound to the concert stage and layering it expertly with brass and often gorgeous harmonies.

On the downside, the set-list includes just five Beatles songs. And their presence both illuminates the weaknesses of the album, and tells a simple truth about Wings: the Beatles tunes and Wings singles here are just plain brilliant; the Wings album tracks, however, stink up the place. This is a diamonds-to-shite pattern set early, when a raucous “Jet”, followed by a thrillingly soulful version of coruscating Lennon pastiche “Let Me Roll It”, are undercut horribly by the turgid pub-rock of Denny Laine’s “Spirits Of Ancient Egypt” and Jimmy McCulloch’s “Medicine Show”.

It takes until the vinyl side three for the album to fully recover momentum with a genuinely lovely six-track acoustic interlude, featuring campfire intimate versions of “I’ve Just Seen A Face”, “Blackbird” and “Yesterday”, and a surprising, Laine-sung take on “Richard Cory”, Paul Simon’s 1965 socialist ballad based on Edward Arlington Robinson’s 19th century poem, which must have gone down a storm with the middle-American couples who only turned up to see a Beatle sing “Lady Madonna” and “The Long And Winding Road”.

Wings Over America is, like any triple live album, too bloody long. But its also a snapshot of a Paul McCartney who, despite some of the Wings album-track dross, felt compelled to make surreal symphonic pop that continued the pop ideals of Sgt Pepper and The White Album, at least until the following year’s “Mull Of Kintyre” showed him just how profitable being Cliff Richard with Beatles gravitas could be in the accursed 1980s.
Garry Mulholland