Unveiling our latest addition to the Uncut family 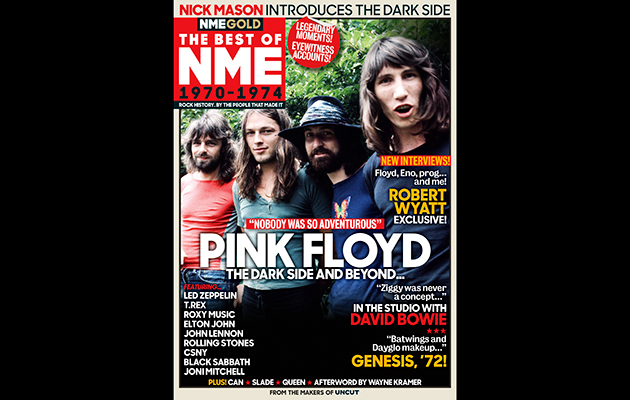 The Pink Floyd who made music between roughly 1970 and 1974 were a band in transition. Post-Syd, the albums they released – More and Ummagumma (’69, but hey), Atom Heart Mother, Meddle and Obscured By Clouds – represent a remarkable evolution and expansion. The journey is often more interesting than the destination – and in this instance, it’s possible to linger on the speculative, cosmic-progressive experiments before reaching the meticulous craftsmanship of Dark Side Of The Moon.

It is this Pink Floyd who appear in our latest magazine, NME Gold: The Best Of NME 1970 – 1974 – on sale Thursday but you can buy it now from our online store. You can read more about the issue below, as I hand you over to John Robinson, our one-shots editor. But first I should quickly mention to our American readers that the Bob Dylan and The Band: Ultimate Music Guide is now available in Barnes & Noble stores boasting a striking exclusive cover design.

“Welcome to the latest edition of NME Gold, a magazine to transport you back to rock’s golden years. Previously we’ve had the pleasure of bringing you selections from the archives curated by music legends like Paul Weller and Liam Gallagher.

“Here, we’re continuing the series of NME Best Ofs we started with NME Gold 1965 – 1969. Inside you’ll find outstanding features from the vault, all introduced with new interviews or unseen insights from the parties involved.

“That might mean hearing a witty reminiscence from Steve Hackett on how Genesis transformed from public school ducklings to rock theatre swans. It could entail hearing from Brother Wayne Kramer from the MC5 – who supplies comment and a stirring afterword – testifying on the power of music to transcend even the worst hardships.

“It also means you’ll be able to read about how Pete Townshend planned to follow up Tommy with The Who. What Roger McGuinn thinks about Gram Parsons. How David Bowie worked on Ziggy Stardust, and what it was like in tax exile with The Rolling Stones or at Mick and Bianca’s wedding.

“You’ll read how nobody understood The Kinks in the 1970s. Not to mention how Elton John hated to lose at table football. And how by magnificently transforming themselves with The Dark Side Of The Moon our cover stars Pink Floyd moved the world of music on further than even they had dared to imagine – as Nick Mason relates in the reminiscence you’ll find inside.

“And that’s before we even mention our delightful exclusive chat with Robert Wyatt, the issue’s godfather. It should go without saying that with the Soft Machine, Matching Mole and his own Rock Bottom album, Robert made some of the most entrancing music of the period. Here, you’ll read about his own work, and also his insights on contemporaries like Pink Floyd, Eno and Slade.

“What else? We’ve got in there with our head torches and made some surprising finds in the archive. There’s some vibrant contemporary takes on John Denver and ELP (‘Could you please close the door if you’re playing that?’). There’s future NME editor Nick Logan on Joni Mitchell’s devastating arrival in London, a brace of lesser-spotted Led Zeppelin reporting, and a Syd Barrett interview unseen since publication.

“Amid this upbeat stuff, the issue hasn’t been without moments of reflection. Readers with a longtime appreciation of NME and of music writing and publishing innovation will no doubt know the name of Roy Carr – a friend to the Uncut family, who died as we were putting the issue together.

“It’s a testament to Roy’s engaging reportage that we didn’t have to try to make space for his work in the mag. He was there already – a convivial presence, effortlessly at the centre of what was happening.”