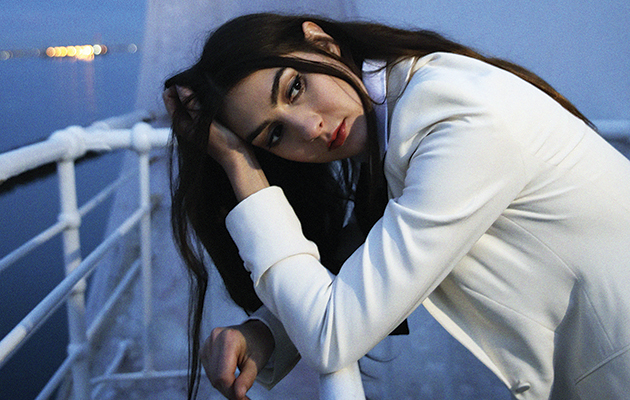 ‘‘Show me where it hurts,” Natalie Mering whispers at the end of “A Lot’s Gonna Change”, the opening track on Weyes Blood’s gigantic fourth LP. An extraordinary exercise in baroque postmodernism, Titanic Rising repurposes familiar elements – the ’70s radio pop of Wings and Abba, the Brit art rock of Fripp and Eno, the well-thumbed pages of the American Songbook – to tell a thoroughly modern story of what happens when everything you grew up believing in goes bad. Needless to say, it hurts all over.

The front cover of her first release for Sub Pop captures the 30-year-old in a drowned approximation of a childhood bedroom, a welcoming, comforting space where something has clearly gone terribly, terribly wrong. Macro disguised as micro, on the surface Titanic Rising is a record about romantic disappointment, the struggle to find a true connection; sink further, and it’s also a meditation on damaged reality, poisoned dreams and finding hope. The Judee Sill of the Netflix age, Mering sums up her quest on the transcendental “Something To Believe”, catching the peak of a Demis Roussos-sized crescendo with a plea to discover “something bigger and louder than the voices in me”. Spoiler alert: she almost does.

Mering’s path to these lush musical uplands has been an unusual one. Born in California, she was raised in Pennsylvania in a born-again Christian family, with an unusual past. Her father, Sumner, made a slightly racy rock LP for Elektra in 1980 before moving away from the dark side (her mother, Pamela, and older brother Zak – aka Raw Thrills – are both recording artists too). As Mering grew up, she lost her faith, filling the gap left by God – and crappy mid-2000s pop – with freak folk and extreme noise as she immersed herself in Philadelphia’s underground scene. She was playing vaguely acoustic music as Weyes Bluhd (name bowdlerised from Flannery O’Connor’s 1952 novel) when she was still a teenager, as well as dabbling with power electronics. In an age where running away to join the circus was no longer an option, it was an impressive statement of independence.

She later linked up with Portland noise-hounds Jackie-O Motherfucker, and ended up putting out CD-Rs of her own experimental songs, which eventually morphed into a low-budget debut LP in 2011 and – after a spell working with lo-fi superstar Ariel Pink – a series of increasingly sophisticated, imploded folk records for Mexican Summer. Her most recent, 2016’s Front Row Seat To Earth, was terrific. Titanic Rising, though, is something else; tightly structured, lavishly orchestrated, brilliantly realised.

It begins back in that bedroom. Glenn Miller’s “Moonlight Serenade” live from Davy Jones’ locker, “A Lot’s Gonna Change” finds Mering longing to “go back to a time when I was just a girl, when I had the world gently wrapped around me, and no good thing could be taken away”. What follows is a gentle, sad message to her younger self, simultaneously encouraging her to aim high and warning her that the years ahead might just be a bit of a disappointment. “You’ll learn to get by”, she purrs; not exactly a ringing endorsement of tomorrow’s world.

Generation Y, though, have had it worse than most, childhoods moulded by CGI, Photoshop and Auto-Tune preparing them woefully for an adult life of insecure employment, Brexit, dick pics, Donald Trump and global warming. On “Andromeda” – its backing track seemingly derived from a chewed-up cassingle of Coolio’s 1995 hit “Gangster’s Paradise” – Mering characterises her quest for true love in a #MEFIRST world as an intergalactic impossibility: settle for a cold corner of someone else’s reality or give up.

It’s a theme she returns to on the cheerily desperate “Everyday”. A piece of Mamas And Papas whimsy that transforms into a rocket-powered refraction of The Chiffons’ “Sweet Talkin’ Guy”, Mering’s portrait of modern dating makes no secret of her slightly shameful yearning for a partner (“I’m so scared of being alone/It’s true, it’s true”). However, she finds that anxiety jamming her radar as she tries to find her “keeper”. Everyone, she senses, is putting on the same brave face, and to make matters worse, a man she talks to at a party reckons that monogamy is a thing of the past too. With the zeitgeist continually moving, how can anyone hope to get it right? “Heart cannot see”, Mering sings, hitting an ecstatic high in the song’s rhapsodic finale. “My love is blind”.

Faced with the treacherous terrain of human interaction, Mering yearns for the kinds of certainties that her childhood religion once offered. On the subtly gigantic “Something To Believe”, she does her best Judy Garland (or at least the Rufus Wainwright version of Judy Garland) as she surveys the spiritual vacuum that a loveless and godless world has bequeathed her. “When fire leaves a girl too burned to try”, she sings, half-crushed, but it was not God alone that set Mering up for a fall.

On the moody “Movies”, she drifts into reverie as she remembers the films that mapped out what she once felt the future might be like (The Wizard Of Oz and Titanic were among her favourites, she tells Uncut). “The meaning of life doesn’t seem to shine like that screen,” she gasps, five-star fiction having made real life look like box-office poison. “I wanna be in my own movie.”
Unfortunately, she is not the only one who does. A moody slab of AM synth-pop haunted by the ghost of King Crimson, “Mirror Forever” is a portrait of a toxic relationship, Mering describing being overwhelmed in a folie à deux. Her gloomy trudge is interrupted by a moment of clarity. “Oh baby, take a look in the mirror”, she repeats, a plea to her demonic partner to dare to see themselves as they truly are.

It’s a big ask. The lush “Wild Times” – Roxy Music’s “Avalon” playing on the deck of the Lusitania – is a maddening jumble of scraps, the physical and the metaphysical. However, Mering stumbles on the words she was looking for halfway through: “Everyone’s broken now and no one knows just how we could have all gotten so far from truth”.

In such circumstances, anyone sensible would abandon hope. However, for all the faith Mering has lost, she has not given up her belief in humanity’s ability to self-right. “Picture Me Better” is the final meaningful act on Titanic Rising (“Nearer To Thee”, like the title track, is a little instrumental blur). A deliciously nebulous soft-shoe shuffle – does that title translate as “understand me more clearly” or “imagine me fixed”? – it finds Mering recalling a relationship that’s already looking better for being over. Her voice is sonorous but sweet throughout Titanic Rising, like Nico on an up day, but she excels herself as she picks out her closing message to the cosmos: “Waiting for the call from beyond, waiting for something with meaning to come through soon.”

God, aliens and Steven Spielberg may not be racing to her rescue, but Titanic Rising is beyond pleading for intervention. For the waterlogged and the infantilised, the answer is as old as The Who’s Tommy: smash the mirror – get free. Despite all painful evidence to the contrary, Mering seems adamant that happiness remains only a small leap of the imagination away. In an imperfect, crumbling universe, Titanic Rising emerges as a subtle but irresistible call to action. Rise up, rise up.