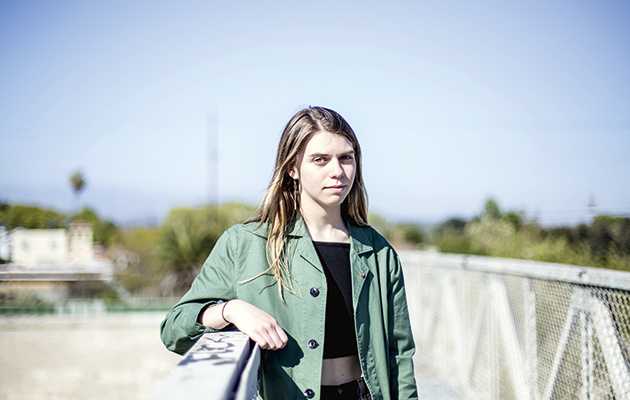 The idea of music as salvation or at least a balm for distressed souls is a popular one, usually applied to the listener, rather then the maker. As is that of music as a refuge – but few mean it quite as literally as Louisville-based singer-songwriter Sarah Beth Tomberlin, who’s described her debut LP as “a kind of shelter”, built through a survivalist instinct as protection from the extreme isolation she feared at one point might “very much” kill her.

As autobiographical narratives of 23-year-old newcomers go, Tomberlin’s is a compelling one, a gift for experiential rubbernecks and emotional voyeurs that makes for slightly uncomfortable retelling, not due to the details themselves, but because poring over the life experiences of (especially) young women as if that’s the most they could have to offer creatively has become a widespread bad habit. Bottom-line decency is an issue here, but more crucial is the question of whether or not the author’s experiences constitute their work’s core in any direct, relational sense. And that’s an obvious affirmative in this case – so much so, that these 10 songs aren’t so much “about” the questioning of faith, identity and life purpose that pitched Tomberlin into despair, as leakages of her self through the walls of that defensive structure.

At Weddings is hermetic in the manner of Bon Iver’s For Emma, Forever Ago and equally measured, sincere and vulnerable, although that’s where the similarities end: it was recorded and produced by Owen Pallett, who also plays guitar and analogue synth and sings backing vocals, and its foundation isn’t folk but the hymns Tomberlin sang in church growing up. Hardly surprising, since listening to secular music was forbidden to the Jacksonville-born daughter of a Baptist pastor, who was home-schooled and then attended a private Christian college she’s described as a “cult”. Sneaked, non-religious listening was to Bright Eyes and Dashboard Confessional via her cousin’s iTunes library, while later on, Arcade Fire’s Neon Bible made a big impact. Seven of the tracks were written when Tomberlin went back to live with her family in rural Illinois after dropping out of college at 17. Able to play guitar and piano by ear from a young age, she’d always written songs, but it was the sweet “Tornado”, with the buzz of an overhead chopper as its intro, pellucid keys and a striking image of its creator as “a tornado with big green eyes” that she chose to share first, edging her out of that debilitating loneliness.

Selected by Mirah (Yom Tov Zeitlyn) as part of Joyful Noise’s White Label series and first released in a limited edition last October, the LP has had three new songs added for its Saddle Creek issue. Two of them are among the set’s strongest: on the country-toned “I’m Not Scared”, Tomberlin’s ringing, soft-grey tone and mouth-against-the-mic intimacy convey blunt personal truths – “I look for redemption in everybody else, but funny thing is that I always hated church… and to be a woman is to be in pain…” – while “Seventeen”, which features braided vocal harmonies, guitar twangling and the faintest echo of Fleetwood Mac’s “Landslide” is her poppiest expression, although it’s kept in check by a challenging “only love the people who don’t love you back/What is up with that?”. Of the earlier songs, “Self-Help” and “Untitled 2” shine particularly bright: on the former, the play of rhythmic and melodic guitar lines is pitched into a gently shrieking storm of Wurlitzer keys that swells over her vocal, which includes the odd line, “but you know I’m not your napkin” (a misheard lyric from an Alex G song). And the phone-recorded “Untitled 2”, with its aquatic ambience, subtle static crackling and ghostly murmuring, implies Grouper as kindred spirits.

The intimate, home-recorded sound and open nature of Tomberlin’s lyrics might suggest the structure she built with At Weddings is a fragile one, but that’s not the case. Whatever its emotional well-spring, her expression is clear, purposeful and strong in its directness and blessed with enough sly wit and wry self-awareness to deliver a line like “I used the self-help book to kill a fly/I think it worked Mom/I think I’m fine” (from “Self-Help”). That in many ways Tomberlin has already lost control of these songs, she readily acknowledges. “I’m happy to share my experience,” she says. “I am a pretty transparent person. The only strange aspect is that people can now share their hot takes on my personal experience.”