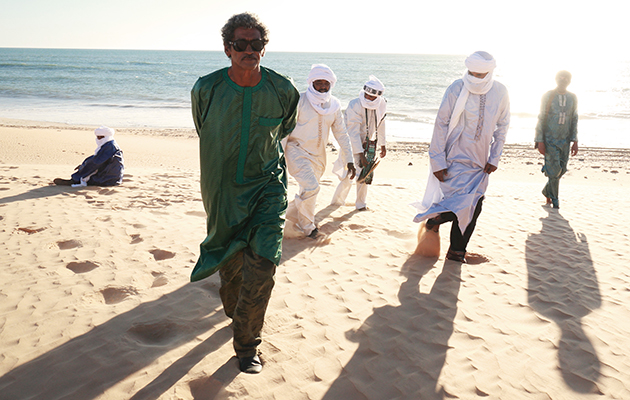 The stories that are told about Tinariwen elevate the group virtually to the status of myth. Founded in the late ’70s by Ibrahim Ag Alhabib, the son of a Tuareg rebel executed by the Malian government, the group spent their early existence as refugees before returning from exile in the early ’90s to engage in armed struggle against their oppressors. Following the ceasefire they returned to music, and today they live a nomadic lifestyle, playing their music – a soulful and ruminative campfire guitar style widely known as “desert blues” – under the stars. Much contemporary music strikes a rebellious pose, but few deserve the epithet quite as much as Tinariwen.

This kind of myth-making, though, can somewhat obscure the fact that Tinariwen are a living, breathing band. They play festivals across the world, their records chart in multiple European countries, and their music has been hailed as an inspiration by everyone from Robert Plant and Brian Eno to a wave of young Tuareg guitar groups like Tamikrest and Imharhan, whose music builds on Tinariwen’s distinctive template.

This isn’t to suggest that in any way Tinariwen have become the establishment. In 2012, the group’s guitarist Abdallah Ag Lamida was abducted by radical Islamists, a symbol of how the very existence of their music continues to challenge a conservative ideology. Still, it demonstrates something of the position Tinariwen hold. Here is a group that is both pioneering, yet somehow rooted in deep tradition; concerned with matters hyper-local, even as their music resonates around the globe.

All of this is reflected in the group’s ninth album, Amadjar. While the group’s two preceding records, 2014’s Emmaar and 2017’s Elwan, were recorded in Joshua National Park in California, Amadjar finds the group back on African soil. It was written and recorded in the West African country of Mauritania, which borders the group’s homeland of Mali. Tinariwen travelled by day and wrote songs around the campfire at night, trailed by a French production team who captured the group’s music live, operating a mobile studio out of a camper van. There is zero sense on Amadjar that this is a band in any way playing to an international audience; on the contrary, this music feels hermetic in its focus, guitars picking out bluesy motifs, voices rising together in mournful chorus, all tethered by a simple drum rhythm that approximates the lollop of a camel making its way across the dunes.

Part of this, of course, is down to Tinariwen’s skill at making their music sound free-flowing and natural, even  as they experiment with their formula. Past albums have featured vocal turns from American alt.rock stalwarts like Mark Lanegan and TV On The Radio’s  Kyp Malone and Tunde Adebimpe.  There’s nothing quite so bold here, although several tracks feature Noura Mint Seymali, a Mauritian griot who brings a welcome female presence; sometimes she’s integrated into the broader chorus, other times left to  ululate freely, as on “Amalouma”,  a song that offers thanks to the Prophet, even as it threatens Tinariwen’s enemies with oblivion.

Throughout, the sense of live performance is palpable – you even, for instance, hear the quiet conversation of players discussing the take at the end of “Iklam Dglour”. Still, some subtle overdubbing brings a few guest musicians into the fold. The Bad Seeds’ Warren  Ellis is present on five of this record’s  13 tracks, echoing the group’s melodies with ramshackle, sawing fiddle.  Cass McCombs, Rodolphe Burger  and Sunn O)))’s Stephen O’Malley all contribute guitar parts. And Micah Nelson adds mandolin and charango to “Taqkal Tarha”, a playful, lopsided canter with an absurd lyric to match: “Money has become a commodity/The worm has become a bird/And the monkey has a mirror/With which he gazes at himself every evening.”

This is a running theme throughout Amadjar: the sense of a world that has somehow been thrown out of balance. “Why are men so divided?” asks “Takount”, while “Kel Tinawen” and “Itous Ohar” are heavy of spirit, dwelling heavily on disloyalty and treachery. Perhaps the album’s key song is “Zawal”, a track written by Abdallah Ag Alhousseyni that divides into two rough halves. The first half is a terrifying vignette that sees prayer time interrupted by a terrible dark shape that blots out the sky, sending turbaned youth fleeing in its wake; in fact, it’s a lyrical dramatisation of the first solar eclipse, which flows seamlessly into a rumination on the end times. “Some affirm that God has already put an end to this world,” sings Ag Alhousseyni. But the song closes with him sitting stoically on his mount, venturing on into the desert, bound for who knows where.

Amadjar translates as “the unknown visitor” in Tamashek. The phrase communicates the feeling of being a stranger in a strange land and, as Tinariwen use it, it should probably be understood both literally and as metaphor. Just as American blues music should be understood through the prism of slavery and faint reminiscence of the African motherland, the desert blues of Amadjar draws its soul from a similar sense of rupture; of a homeland rendered unreachable by human conflict, an earthly paradise placed just out of reach.