Tangerine Dream – In Search Of Hades: The Virgin  Recordings 1973–1979 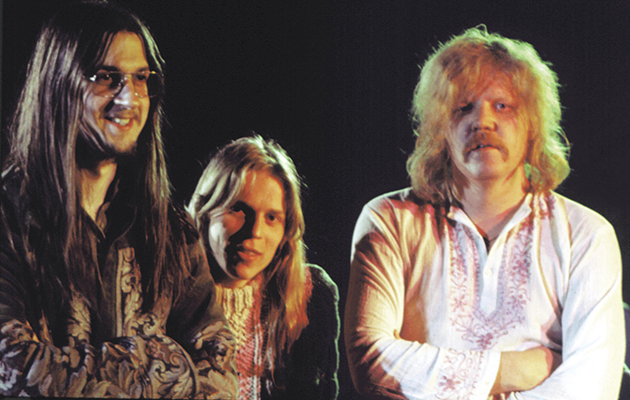 In recent years, Tangerine Dream have enjoyed something of a raised profile: Survive’s music for the hugely popular Stranger Things, for example, leans heavily on the ever-shifting German group’s early ’80s scores, and last December’s interactive Black Mirror episode “Bandersnatch” at one point allowed the viewer to decide whether the main character purchased Tangerine Dream’s Phaedra or Isao Tomita’s The Bermuda Triangle; your choice determined the soundtrack for the protagonist’s nightmarish mental unravelling later on.

Yet this isn’t the usual story of cult legends finally getting their dues. Tangerine Dream have been firmly in the zeitgeist before: 1974’s Phaedra, their first LP for Virgin, sold impressively well, breaching the UK Top 20. Edgar Froese and his group, then including Christopher Franke and Peter Baumann, were also a significant live draw from that time onwards, performing rapturously received gigs at prestigious venues such as London’s Royal Albert Hall and Los Angeles’ Greek Theater.

Of course, “strange” music could certainly trouble the charts in the ’70s, but it didn’t come any stranger than Tangerine Dream. Using giant Moog modular synths, massed Mellotrons complete with their own custom tapes, and all manner of effects, they were often resolutely un-rock. What’s more, everything they produced from their inception in 1967 to at least 1977 was completely improvised, whether they were in the studio or onstage. A lot of the capricious music that this process created is collected here in the 16CD + 2 Blu-ray Ultra Deluxe Boxset, much of it previously unreleased. (There’s also a shorter version available that comprises just the studio albums from 1974-79, but the larger release is the one to explore, if your budget allows.)

It begins with Phaedra, the first time they used a sequencer to control their skyscraping synth modules. The side-long title track that dominates the album is still hugely powerful, pulsating patterns rising in pitch as their Moogs warm up, to be joined by phased sweeps of Mellotron and otherworldly noises. The closing “Sequent C” is the opposite, meanwhile, eerie and beautiful and led by Baumann on echoed flute.

For the first time, we get to hear the improvisations from Virgin’s Manor studio that didn’t make the final cut for Phaedra. Mostly, it seems Froese and the band selected the album tracks wisely, but there are still treats worth hearing here: “Phaedra Out-Take Version 2A” features distorted groaning over walls of Mellotron, and recalls 1973’s Atem (John Peel’s album of the year), while “Phaedra Out-Take 1” channels mid-century modern classical with its cor anglais textures and subtle harmonic shifts. Most promising is “2nd Piece Side 1”, which, with its piano and chimes, recalls the work of Popol Vuh.

Another highlight of the boxset is Oedipus Tyrannus, a legendary lost album that’s only been available incomplete and usually shrouded in bootleg hiss. Froese, Fricke and Baumann’s soundtrack to a stage production of the classical tragedy, it was recorded in Froese’s home studio in ’74 but is easily the equal to Phaedra. Instead of bubbling synths, though, there’s backwards piano, electronic tones echoing endlessly and chimes that evoke a haunted nursery.

Now mixed by Steven Wilson, the likes of “Overture” and “Act 1” demonstrate the darker moods that ’70s Tangerine Dream were capable of – for all their reliance on the latest audio technologies, there was often something ancient and earthy about their sound, a neopagan feel that they shared with fellow improvisers the Third Ear Band.

“Act 2: Battle” is 10 minutes of forward movement driven by a pummelling white-noise beat, its martial techno looking forward to Warp and Orbital in all their crunchy, chromatic menace. “Act 2: Baroque” is something else entirely, its courtly harpsichord-like keys and processed flute recalling early music, while the 22-minute “Act 3” waits 13 minutes until a synth sequence patters in from the free-form cacophony. Throughout the 74 minutes of Oedipus Tyrannus, nature finds a way in, too: synths chatter like tropical birds, cackle like seagulls and vibrate like cicadas.

The other main attractions are the three complete live sets from 1974 and ’75, two of them with surprisingly tender introductions from John Peel (“When Phaedra went into the LP charts it was one of the great moments of my life…”). The first part of their Victoria Palace gig from June 1974 is perhaps the best, building inexorably until it blossoms into a “Phaedra”-esque canter after 30 minutes; the 28-minute “Part Two” reverses the trick, gradually moving from phased percussion into an ambient coda, while the 13-minute “Encore” is frenetic and thrillingly burnt-out.

October 1974’s Rainbow show is another great example of their collective improvisational skill, its drones and rippling sequences occasionally offset by panned rustling or industrial clanks; KC & The Sunshine Band played the night before, seemingly just to emphasise how strange Tangerine Dream’s mainstream success was. Their Albert Hall performance from April ’75 shows the uneven nature of improvisation, however, dominated by discordant string synths and little dynamic variation.

Phaedra’s immediate follow-ups are strong, with 1975’s humid Rubycon condensed and kaleidoscopic, and Ricochet (also ’75) a more musical departure: the piano section that opens “Part Two” features more notes than, say, all four sides of Zeit had contained four years before. From 1976 onwards, though – comprising the final four CDs of this box – Tangerine Dream’s efforts lose a certain spark. Perhaps it was down to improvements in technology or just the band’s drive to continually evolve, but their music became fussier and a little cheesier on Stratosfear, and a lot more “rock” on 1977’s US live set Encore. There are distorted lead guitars and far too many melodic lead lines shivering with overused vibrato. If it sounded like the future then, it seems resolutely of the past when heard in 2019.

Jolliffe had departed by the time of 1979’s Force Majeure, but the electro-disco grooves of the title track set the group up for the next decade, when they’d soundtrack big-budget films such as Risky Business and Legend. That period seems a world away from the universe that In Search Of Hades conjures up across its first 12 CDs, covering 1973, ’74 and ’75. As the Albert Hall erupts into wild cheers at the end of a claustrophobic 68-minute improvisation or when American jocks whoop at the start of a complex Moog sequence, it’s a pleasingly confusing experience, as if your stereo is playing a recording from some distant alien galaxy, a bootleg emanating from the depths of an enticing rabbit hole. Stranger things, indeed.