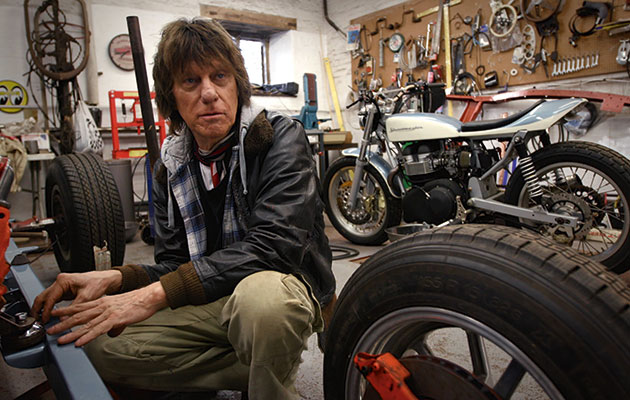 Originally published in Uncut's January 2019 issue Looking back from a distance of 40 years, Bauhaus’s singer Peter Murphy is...
Read more

Perhaps the key to this engaging but at times frustrating portrait of one of rock’n’roll’s most canonical guitarists comes when Aerosmith’s Joe Perry notes, “There’s  a certain amount of  fuck-you-ness to everything Jeff does.”

Several others make a similar point without quite the same succinctness. David Gilmour calls out Beck as one of our most “reluctant” rock stars, the late Sir George Martin describes him as “temperamental” and Beck himself reinforces the judgement by defiantly insisting that folding The Jeff Beck Group two weeks before they were due to play Woodstock was the smartest move he ever made.

The problem is that by the end of Matthew Longfellow’s 90-minute documentary, we’re not really much closer to understanding where the “fuck-you-ness” came from. Interviewed extensively at home and in his garage as he constructs another of his beloved hot rods, Beck comes across as an amiable and articulate man who thinks deeply about music. Although we’re amply reminded of all his achievements and are provided with plenty of evidence of his inventiveness as a guitarist, what makes  Jeff Beck tick remains an enigma.

Even those who have known him best during his 50-year career seem unable to shed much light. Rod Stewart offers a blow-by-blow account of the Woodstock no-show, involving Beck doing a runner under cover of the night during an American tour and his bandmates getting phone calls the following day informing them that their leader had gone home to his mum. Yet there’s no explanation why, other than Beck’s own vague claim that it was something to do with “integrity”.

However nebulous, it’s a notion that clearly means a lot to him. Only Neil Young has walked out on bands more times than Beck, and he recounts how he quit The Yardbirds in the middle of another American tour with palpable satisfaction. Playing on a bill with Gary Lewis & The Playboys to “teeny bop” audiences, after a couple of gigs he called fellow Yardbird Jimmy Page to his hotel room and told him he’d have to take over his lead-guitar duties because, “This is Middle America and we’re telling people we’re part of that and we’re not.” Once again he went home to Mum: “I had my Corvette parked in my mother’s driveway and I was free to dream again.”

Except that he wasn’t, as the reissued “Hi-Ho Silver Lining”, which he likens to “being asked to wear a pink frock”, put him back in the charts and created a distorted image, which to some extent persists to this day.

Longfellow made his name on the ‘classic albums’ TV series, a sharply focused format that is the opposite of the episodic nature of Beck’s stop-start career. However, he makes a decent fist of telling the disjointed story via a stellar cast of talking heads, judicious use of archive footage and some potent musical interludes, including Rod Stewart singing “Shapes Of Things” at the Fillmore East, Beck lazily but exquisitely picking Mingus’s “Goodbye Pork Pie Hat” while reclining on a sofa, playing with Clapton at Ronnie Scott’s and performing a medley of “Immigrant Song” and “Beck’s Bolero” with Jimmy Page at the Rock’n’Roll Hall Of Fame.

Coming fast on the heels of Eric Clapton: Life In 12 Bars, comparisons are inevitable, and Still On The Run is considerably  lighter on personal revelation. If there’s  a central theme, it’s that after realising he would never find another Rod Stewart, listening to John McLaughlin and Miles Davis persuaded him “to make his guitar his voice”, a decision that resulted in the change of direction heralded by 1975’s  all-instrumental Blow By Blow.

The final section of the film is the least satisfactory, as a cast of famous collaborators pay tribute in such obsequious fashion that you might imagine Beck had already died and gone to guitar heaven. The gist, as Jennifer Batten gushingly puts it, is that “there’s a difference between playing music and being music – and Jeff is music”. It doesn’t entirely ring true as he tinkers happily with his hot rods and cheerfully admits that he keeps a guitar in every room “to remind me I should be doing that”.

Yet if Longfellow’s objective is to restate Beck’s claim as the equal of Clapton and Page in the trinity of British rock guitar pioneers, then Still On The Run does a decent job. “People need to up their awareness of him,” Ronnie Wood claims.  “I mean, where have they been?”