Glorious avant experiments and krautrock monoliths, with a pop heart 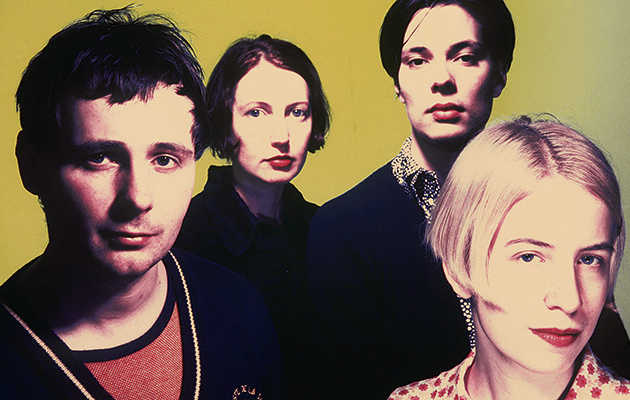 Ever since announcing their hiatus in 2009, English-French avant-pop group Stereolab have gone through a slow but significant re-evaluation. If, during their existence, people could be sniffy about the group – record-collection pop! Krautrock by numbers! Process over outcome! – a broader audience has since caught up with Stereolab: see how they’re fêted, now, by figures as distinct as Pharrell Williams, Bradford Cox of Deerhunter and Tyler The Creator. Their albums, though, have been hard to come by for some time, making these reissues of their Switched On series – which pulled together hard-to-find 7in, 10in and split singles, compilation appearances and other experiments – most welcome.

Stereolab’s roots appeared to be in indie-pop and C86 – guitarist and songwriter Tim Gane was in agit-pop gang McCarthy; he met singer and lyricist Laetitia Sadier after a gig in France. They soon became a couple, with Sadier relocating to London and the pair forming Stereolab in 1990, with Martin Kean, who had played bass in New Zealand pop group The Chills, and drummer Joe Dilworth, who was also working as a photographer: those are his bleached, white-out photos on the cover of My Bloody Valentine’s Isn’t Anything. (Stereolab’s lineups would be in a relatively constant state of flux, with members coming and going over the years, though for a period of time Gane and Sadier counted drummer Andy Ramsay and the late, much-missed singer, guitarist and keyboard player Mary Hansen as solid co-conspirators.)

But there were deeper roots to Stereolab. Before McCarthy, Gane had made noise cassettes as Unkommuniti, hooking up with Broken Flag, the label run by Gary Mundy of Ramleh. Earlier still, Gane had his head rearranged by some chance encounters with avant-garde and experimental music: talking about his discovery of future collaborator Nurse With Wound via the music press, he recalls that “Sounds [magazine] got me into many things, actually: Throbbing Gristle, Nurse With Wound, and the Recommended reissue of the first Faust album in 1979… The photo and description of the music so intrigued me that I went out and bought it. How could there be music like that made before punk!”

That final discovery might well be the most important, as early Stereolab picked up on the manifold experiments of krautrock, while foregrounding its pop possibilities: for every head-wrecking blast of drone, there was a beautiful pop melody, Sadier and Gina Morris (and later, Hansen) harmonising gorgeously over drums that ticked, metronome-like, alongside white-light, streamlined guitars, and sputtering arcs of rough-as-guts analogue keyboards. It was a simple, effective strategy, and one that dominates the first two of these three Switched On compilations: see the hypnotic throb of “Super Electric”, the gentle menace of “Contact”, and the driving psychedelia of “The Light That Will Cease To Fail”.

It’s important, though, not to over-emphasise the importance of groups like Faust and Neu! to the spider’s web of influences that Stereolab gathered around them. There was so much more going on – a fondness for the ‘sincere kitsch’ of easy listening; a love of the unexpected twists and turns of ’60s pop-psych, and its oft-surrealist production values; deep explorations of hard-edged electronic abstraction and musique concrète; and a general embrace of the detritus of popular culture. All this, plus song titles drawn from all kinds of artistic and scientific endeavour: Stereolab are probably the only group who’ve lifted a song title from  a book on Californian performance art.

Those multiple influences begin to show on Refried Ectoplasm, which is, by general consensus, the pick of the Switched On series. The breadth it covers is perfect – it makes enough space for all kinds of diversions, from the genteel, playful jangle of “Tone Burst (Country)” to the heads-down, psycho-dirge of “Tempter”, while also featuring some of Stereolab’s finest pop songs, such as the gilded glide of “French Disko” and the pulsing, thudding blocks of abraded noise that constitute “John Cage Bubblegum”, perhaps the emblematic single from this period. You could also hear, on some songs, the influence of Sean O’Hagan of The High Llamas, who was a member from 1993 to 1994, and who brought a particular lyricism to the group’s way with melody.

The centrepiece of Refried Ectoplasm, however, is Stereolab’s first collaboration with Nurse With Wound, the “Crumb Duck” 10in, from which comes both “Animal Or Vegetable (…A Wonderful Wooden Reason)” and “Exploding Head Movie”. Steven Stapleton of Nurse With Wound was already legendary, in certain circles, for his deep love of German experimental music from the 1970s; it was a perfectly imperfect fit, with Stapleton either pushing the group’s mantric rock through waves of effects (“Exploding Head Movie”) or completely dissecting their music, building a 16-minute anti-epic that’s like Faust’s career in miniature (“Animal Or Vegetable”).

Indeed, Gane seems to have given Stapleton material custom-designed for his interests: “I orientated the tracks to be rather krautrock bubblegum in a fast-driving Neu! and pounding Faust manner,” Gane recalls. Always a conscious, intelligent artist, Gane knew exactly how to give Stapleton material he could work with, while pushing him into unfamiliar, more pop territory.

The first two Switched On compilations collect material from 1991 to 1994. In the latter year, their processes changed, and they started to pull apart the idea of ‘the band’, entering the studio with nothing planned beyond the simplest four-track recordings. “This turned out to be the most radical change for us,” Gane explains, “as it totally freed us up to interpret the music in a very open way, and enabled albums like Emperor Tomato Ketchup and Dots & Loops to come out of the process.”

On Aluminum Tunes, you can hear how Stereolab’s music has been blown wide open by this change. The songs from 1995’s Music From The Amorphous Body Study Center set the tone – breezy, luscious pop songs meet shuddering drone-rock miniatures and space-age children’s tunes – and the rest of the material takes in some of their most risk-taking recordings, like the crushed, colliding edits of “Iron Man”, the sugar-rush blast of “Speedy Car”, and a playful cover of several bossa nova standards, “One Note Samba/Surfboard”, with guest flute from Herbie Mann.

They were also writing some of their loveliest songs – see Study Center’s “Pop Quiz” and “The Extension Trip”, and melancholy swoons “You Used To Call Me Sadness” and “Seeperbold”. If Aluminum Tunes doesn’t sit together quite as convincingly as its predecessors, that’s largely due to the sheer sweep of the material it takes in. But listening back, it’s astonishing to hear how Stereolab managed to fit so much of the shadow history of music together in an almost faultless run of singles and albums, and yet to constantly transcend their influences, to make music that could be genuinely affecting, in its love for music, and in its thoughtful address of its audience. It’s pop that loves pop – and loves the bravery of the experimentation at the heart of pop at its best.