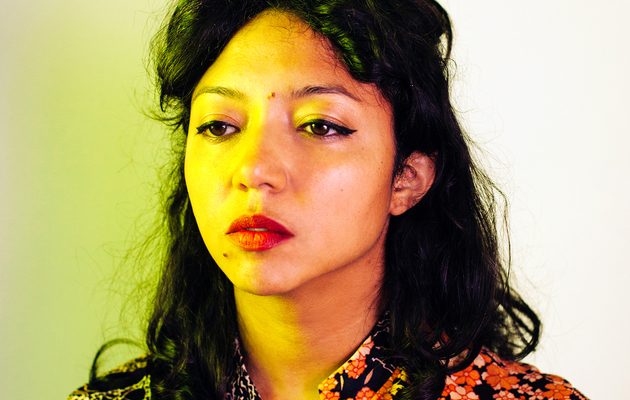 Even more than most cities, Los Angeles has a split personality. Across its vast sprawl, reality meets fantasy, strange ideas filter into the mainstream, and wild success battles broken dreams.

This photocopy of paradise has long been ripe for exploration by artists from Raymond Chandler to David Lynch, and now singer-songwriter Shana Cleveland has drawn on her peculiar experiences of LA for her second solo album. Across Night Of The Worm Moon’s 10 hushed, hypnotic tracks, the guitarist sings of a friend’s creative burn-out on the West Coast, of a mysterious light in the sky, of a place where creatures swarm into the trees and sing “for you”, and where a silent house becomes a sign of impending horror.

Crucially, Cleveland was not born a Californian: she grew up in Michigan, the daughter of blues musicians, but found herself in Seattle a decade ago, forming surf-rock quartet La Luz. The group then moved to LA, recording Weirdo Shrine with Ty Segall, and Cleveland became fascinated by some of the local beliefs. “To me it seems like a place that encourages that sort of mysticism and open-mindedness,” she tells Uncut.

Night Of The Worm Moon isn’t her first album on her own – Oh Man, Cover The Ground was recorded in 2011 and released in 2015 – but it sees her return to solo work following Weirdo Shrine and La Luz’s Dan Auerbach-produced Floating Features (2018). Things have changed: rather than the stoned Fahey and Basho figures of her debut, there’s a hot, dusty feel to these songs, with parched synths and Olie Eshleman’s cosmic pedal steel. A stronger psychedelic vein runs through the album, too, with Cleveland picking out woozy, unexpected chords that echo Syd Barrett’s “Terrapin”. If this is desert music, it’s less a blissful peyote trip and more a hike gone wrong, with thirst and fatigue bringing on the strangest visions.

Sometimes what seems at first fantastical can be real, though: “The Fireball” finds Cleveland recalling seeing a giant comet streaking through the air, but “no-one around was looking up at the same time”. More sinister is the title track, which sounds as if it was inspired by a nightmare (à la La Luz’s “The Creature”) but was in fact brought on by the sight of a strange man hanging around outside Cleveland’s house for days on end. “I was at home alone a lot,” she says, “and my imagination just got the better of me.”

The tumbleweed lilt of “Face Of The Sun” pays tribute to an acquaintance who left the Midwest for musical success on the West Coast, only to be chewed up by the industry. “A New Song” is similarly bittersweet, a tale of domestic bliss undercut by drunken synths and the line, delivered as if from the depths of sleep, “You broke a vow we didn’t talk about, but I found out.”

Elsewhere, Cleveland delves deeper into the subconscious, with the opening “Don’t Let Me Sleep” recounting a dream where the guitarist saw her late grandmother at the side of the stage, “waiting to tell me she loves me so”. Similarly, the gorgeous “In Another Realm” can be read as a message to a loved one who’s far away, but as the song progresses, reality is muddied: is the barrier between them actually between life and death? “In another realm… I know that you won’t let me go,” she sings. “Invisible When The Sun Leaves” has a similar duality – its opening verse seems to describe cicadas, singing unseen, but the patterns Cleveland strikes in open G minor tuning suggest something much darker is on the way.

Instrumental music is clearly important to Cleveland (the album’s title is a nod to Sun Ra’s The Night Of The Purple Moon, after all), and so the flighty “Castle Milk” and the bluesier “Solar Creep” find her picking over jazzy drums and double bass. Indeed, much of Night Of The Worm Moon has a meditative, unhurried quality that’s more typically found in instrumental records such as Alice Coltrane’s Journey In Satchidananda or Brian Eno’s Another Green World. Worm Moon might be the nocturnal flipside to these, in both its content and Cleveland’s sleepy delivery, and after some deep immersion its charms fully unfold into a beautifully hazy whole.

Like all huge cities, LA can prove exhausting to live in, and “Invisible When The Sun Leaves” contains a hint of that in the haiku-like “Little house out/By some water”, as if Cleveland is seeking a respite from the sprawl. She’s escaped now, having moved up to “the middle of nowhere” in northern California’s Gold Country; but her LA experiences, dreams and nightmares all, have crystallised into this miniature masterpiece.