The Raconteurs – Help Us Stranger

Jack White, Brendan Benson and friends reunite  – and seem to be having... fun?! 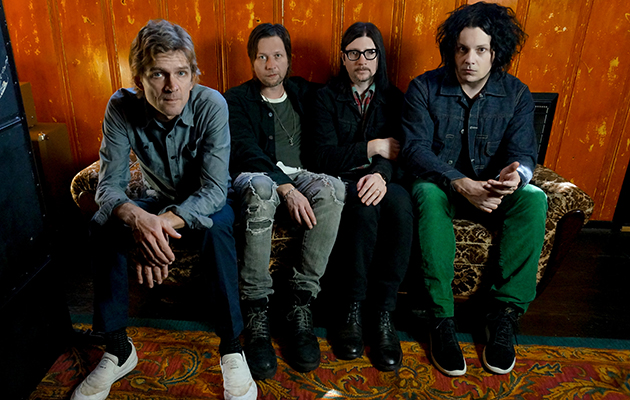 Would it be in any way difficult and demanding to work with Jack White?  Until not so long ago, given his rather prickly reputation  and exacting creative approach, the answer to that for many might have been no. Yet last year’s Boarding House Reach had moments that suggested he was rediscovering his playful side, and  if ever there was a record that sounds  like he’s having a high old time, it’s  this one.

Maybe he’s fallen in with a good  crowd. After a full decade away, he’s finally found time to reconvene with his old songwriting foil Brendan Benson,  plus the familiar rhythm section of Jack Lawrence and Patrick Keeler, and make a third Raconteurs record. But the invigorating if slightly uneven rock’n’roll racket made by these men back then pales in comparison to the vital, vintage but inventive rock record they’ve come up with here.

It doesn’t start too promisingly, mind. Casual, tuning-up-style twiddles lazily raise themselves off their backsides to pick up the thread of a guitar motif on opening track “Bored And Razed”. But then a switch flicks and we’re smacked in the chops by fat, double-tracked power chords, backed up with bass-drum thumps and cymbal crashes that instantly recall Bon Scott-era AC/DC. And then, surfing on squealing rockabilly guitar licks, we’re off. “Rolling a jukebox joint in the corner/Trolling myself in the mirror at night,” snarls White, with a faintly hysterical, desperate quality that’s instantly riveting. It helps that you can fully imagine him “trolling himself in the mirror”, but he’s not the only one sounding wired to the mains here.

“California bored and raaaaaazed,” he and Benson sing as if spraying phlegm into the same mic, and there’s a crackling energy that pins the listener to the wall. It sounds like the band anthem of a twentysomething group just starting out, rather than the work of a couple of old stagers rapidly approaching middle age. At regular intervals from that point on, there’s a strong sense of a gang of mates channelling the soothingly scabrous sounds of some of their favourite hard-rock records. “Live A Lie” is a glorious 140 seconds, built around a visceral, snarling riff lovingly lifted straight out of The Stooges’ Raw Power, as Benson sees no reason to conceal similarly base instincts in his vocal: “I just wanna live a lie with you/I just wanna lie with you.”

The whoop that greets the drums as they join the instantly stomp-worthy double-guitar riff of “Sunday Driver” recalls the kind of joyous, gonzo-rock attitude heard on fashion-proof albums like The Cult’s Electric. There’s even a bloody cowbell on the psychedelically tinged blues-rock groove of “What’s Yours Is Mine”. Even when they’re changing up the tempo, there’s a sense of summoning up the spirit of 1972; hence the Southern-rock ballad “Somedays (I Don’t Feel Like Trying)” starts off with distinct echoes of Lynyrd Skynyrd’s “Tuesday’s Gone”.

It would be wrong, though, to picture Help Us Stranger as conservative musical comfort food. There’s no shortage of invention and genre mashes to prick up the ears here. Dean Fertita’s tipsy pub-piano riff that barges its way into “Shine The Light On Me” precedes a cooing, harmony-enhanced chorus, then some distinctly Meg-style drums heat up the second verse, and increasingly it’s as if we’re hearing what we might have if The White Stripes had reconvened rather  than The Raconteurs.

“I hear a lot of rock… but where’s the roll?” Keith Richards is apocryphally quoted as saying. No worries here, Keef. While some of the flintier tracks on The Raconteurs’ last LP, 2008’s Consolers Of The Lonely, had a certain stiff quality, the band here, augmented again by Fertita and Nashville R&B organist Joshua Smith, have made a record driven chiefly by low-slung grooves and strutting riffs rather than workaday indie-rock song structures. And the rhythm section seem to have got the funk in their old age, with the Benson-led country rocker “Help Me Stranger” underpinned by a curious breakbeat reminiscent of the early-’90s period when everyone wanted to have a Clyde Stubblefield or Jabo Starks rhythm in their sample library. Perhaps it should sound awful, but it works.

The one cover on the album, Donovan’s harmonica-honking, turbo-blues B-side “Hey Gyp (Dig The Slowness)”, manages to improve on the original with some inspired extra touches. Patrick Keeler rustles up a supremely funky, shoe-shuffling breakbeat beneath it, which retains a clattery abrasiveness as well  as a strong groove, while Benson tries the old White trick of voicing his romantic angst through the studio equivalent of  a loudhailer.

Like many a classic trad-rock album, Help Us Stranger ends on a slow-burning ballad. “Maybe I’m just a castaway, or a poor boy led astray,” White laments on “Thoughts And Prayers”, before bluegrass fiddle and mandolin spiral off into enjoyable bouts of self-pity. Au contraire, Jack sounds like he’s back on the path to righteousness – and, this time, his friends have done him mighty proud.

Uncut: the past, present and future of great music.</strong