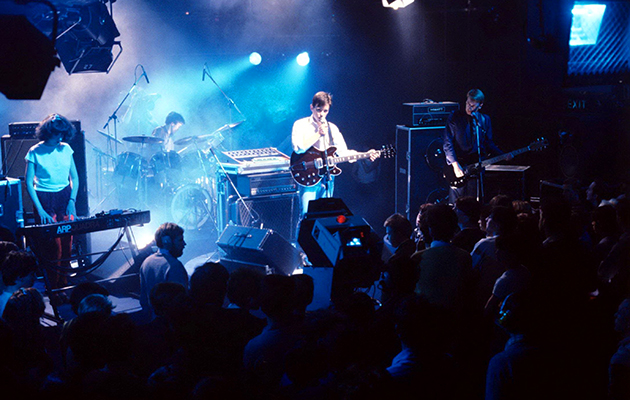 We weren’t pop and we weren’t art, we were just… lucky.” So claimed drummer Stephen Morris recently, in one of  a series of YouTube “Transmissions” from New Order teasing this expanded reissue of their debut. He was referring to the band’s eventual landing the right way up – convincing, if imperfect, bridging album in their hands – after months of tumbling in pained darkness and confusion following Ian Curtis’s death. Somehow, Morris, Bernard Sumner and Peter Hook had come through it and, with the later addition of Gillian Gilbert, wrangled a whole new group identity. Not only that, they could see a future, even if its shape was indistinct.

Movement’s recording process was famously difficult: band members’ grief aside, the eccentric working methods and obnoxious behaviour of producer Martin Hannett have created a mythos layered with worn narratives that increase in potency with every passing year. But it’s no less crucial a backstory for that. Nearly 40 years on, Movement compels as a document of the metamorphosis from Joy Division minus the singer to something else, captured in reel time. This boxset – more particularly the original album, plus an 18-track disc of previously unreleased material – chronicles that journey in a way 2008’s modest collector’s edition could not, its marketing as the “definitive edition” sounding a faint note of relief in its finality. By now, that corner of the New Order vault must be well and truly cleaned out.

That Joy Division’s ghost stalks Movement is hardly surprising, given that New Order had written more than half a dozen new songs just two months after Curtis’s death, one of them (“Dreams Never End”) reportedly hours after his wake: it’s present in the monochrome palette, austere instrumental and vocal lines and the vast, echoing spaces. But the way many of the songs are configured – via heavy use of drum machines, sequencers and synths – is significantly different. So, while “Truth” is as sombre as anything off Closer, strung out along a hypnotic bassline, with a bleakly disassociated vocal and featuring the mournful parp of a melodica, the somewhat messy “Senses” builds to a death-disco frenzy via an opening salvo of electronic hiss and clattering, underpinned by a furiously rolling drum pattern. And the heavily percussive “ICB”, strafed by processed ricochets, whistles and whip cracks, makes for a differently abstract drama.

Two tracks are at the opposite end of the mood spectrum. Opener “Dreams Never End” uses that instantly identifiable, six-string bass riff, clarion guitar peals and a galloping beat to suggest the exhilaration of roaring across a wide-open space charged with promise, with lyrics (“No looking back now, we’re pushing through”) it’s tempting to read as a future-positive declaration, while goth-disco closer “Denial” struggles to contain its frantic rhythmic crosscurrents and is a merry jig in comparison with the sepulchral “The Him”. It’s this push/pull between introverted, post-punk severity and the kind of confident, electronic pulsing so central to “Everything’s Gone Green”  (the game-changer informed by the band’s contact with NY club culture, written towards the end of the sessions, but left off the album) that characterises Movement.

Morris has described the record as “just a snapshot  of a few months of our lives”. In which case, the demos, rehearsal recordings and alternative mixes collected on this boxset’s companion disc are like annotations to that snapshot, pointing to New Order’s shifting intent and exploratory process during a uniquely transformative period. The demos are especially significant: one set recorded by the then trio in early September of 1980 at Cabaret Voltaire’s Western Works studio in Sheffield and heavily bootlegged down the decades, but officially released here for the first time; the other recorded at Rochdale’s Cargo Studios in late November and unreleased.

The five WW tracks document all three musicians testing their vocals, since no-one wanted to step into Curtis’s shoes: Morris is entirely creditable on “Truth” and (non-album track) “Ceremony”, while Hook sings “Everything’s Gone Green” and Sumner “Homage”, a peculiar, punk-Floyd number with deranged hi-hats that was dumped and never revived. Skronky, Slits-ish jam “Are You Ready For This”, meanwhile, features Stephen Mallinder and New Order manager Rob Gretton on vocals. Highlights of the Cargo tracks – all recorded live, with little or no overdubbing – are an appealingly scrappy take on “Mesh” (the B-side of “Everything…”), a leaner and more determined “Procession” and “Doubts Even Here”,  a five-minute instrumental shorn of the final version’s cacophonous outro.

“Bonus” discs in boxsets too often feature random studio sweepings of interest only to completists, but Movement’s is as entertaining as it is instructive, allowing voyeuristic earwigging from behind the soundproofed door. All New Order members may have had to make their peace with this fresh exposure as they did with the original album, and three of them might be doing it again soon; in June, Unknown Pleasures turns  40. If dreams never end, then neither does reevaluation.