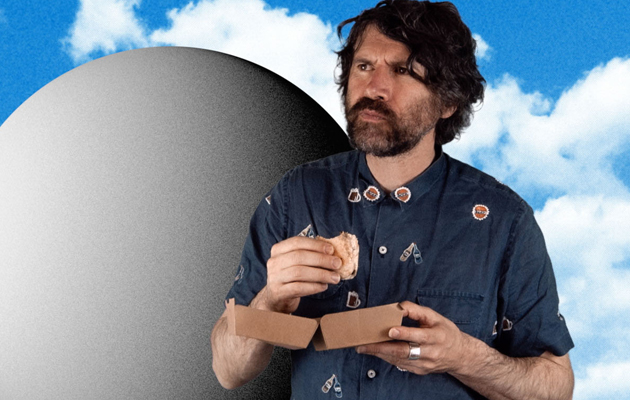 Twenty years ago, Super Furry Animals released Guerrilla, a technicolour, hyperactive pop album – or at least the quintet’s twisted idea of a pop album – laced with manic electronic beats, Caribbean textures, Beach Boys harmonies and songs about chewing gum and mobile phones. Viewed from 2019, it seemed to predict the melting pot of global influences that make up mainstream pop today, even if no single artist has created something quite so wonderfully deranged as “The Door To This House Remains Open”.

Since then though, SFA and Gruff Rhys have stepped back from the brink of such colourful experimentation. Rhys’ last three solo albums – 2011’s Hotel Shampoo, 2014’s American Interior and 2018’s Babelsberg – excellent as they were, found Rhys mining a statelier, slower sound inspired by piano ballads, Americana and orchestral chamber pop. Just 15 months after Babelsberg, however, he’s unleashing Pang!, which quickens the tempos and embraces the collaged grandeur of electronic pop music in a way that Rhys hasn’t in years.

Crucial to the sound of Pang! is South African producer Muzi, who Rhys met while both participated in the most recent instalment of Damon Albarn’s Africa Express project. Muzi remixed “Bae Bae Bae”, included here, and Rhys was so pleased with the result that they agreed to work together on his latest set of ideas.

Babelsberg, of course, was recorded as stripped-down tracks that were later topped with a lavish layer of classical orchestration, and Pang! follows a  similar process: this time, however,  the icing on the sparse, mainly acoustic cake comes from Muzi’s synths and  beats. Songs like the title track and  “Ara Deg (Ddaw’r Awen)” are driven by a mix of live drums, played by former Flaming Lip Kliph Scurlock (now the Furries’ archivist, among other things), and processed, skipping beats, Rhys’ acoustic guitar, Muzi’s synths and the occasional burst of balafon, an African xylophone-like instrument.

There’s also a lilting Tropicalia feel to much of the record which, Rhys tells Uncut, stems from Super Furry Animals’ Love Kraft mixing session in Brazil in 2005, and bled into his excellent 2007 solo album Candylion. With their rootless bossa nova chords, the title track and “Niwl O Anwiredd” in particular could be lost Caetano Veloso tracks, with Rhys’ spidery nylon-string parts augmented by  a web of diced drums and jazzy trumpet. As the album progresses, things get stranger, the treatments increasingly adventurous: on “Ôl Bys/Nodau Clust”, Muzi erases practically all the acoustic instruments, leaving Rhys’ Gregorian vocals beautifully adrift in a sea of percussion and reverb. Meanwhile, during the closing “Annedd Im Danedd”, clicking drums and multi-tracked brass are the only instruments backing Rhys’ harmonised vocals.

If it’s not already apparent from the titles, Pang! is entirely in Welsh, for the first time across a whole album since Rhys’ 2005 solo debut, Yr Atal Genhedlaeth. When SFA released Mwng in 2000, the use of Welsh in a charting album was so notable it was mentioned in parliament; today, artists such as BTS and Rosalia sing in their native languages and regularly make it high into English-speaking charts around the world, while closer to home, Gwenno has managed to carve out a successful solo career singing only in Welsh and Cornish. The only drawback here for those of us who can’t speak Welsh, of course, is that we miss Rhys’ witty, Gainsbourg-esque wordplay: “Digidigol”, explains the songwriter, is a nonsense version of the Welsh for “digital”, “digidol”, while “Eli Haul” translates as “sun screen”, the effects of the heat reflected in the lyrics. “I was trying to write lyrics that sound like they’ve been baked by the sun,” Rhys tells Uncut. “They become abstract, like the song’s melting or something.”

The pinnacle of the album’s mix of Rhys and Muzi’s styles occurs on “Niwl O Anwiredd”. The basis of the song is an acoustic folk lament that recalls Super Furry Animals’ “Colonise The Moon”, very droning, very British Isles; but it gathers sheets of other instruments as it progresses, from digital beats and Indian tabla, to massed vocals, balafon and some kind of electronic harp swell. Here, then, is a meeting of continents and hemispheres, of different cultures perfectly complementing each other in three-and-a-half minutes.

While Pang!, totalling just under half an hour, doesn’t have the conceptual strengths of Babelsberg or American Interior, it’s nevertheless a delight to hear Rhys once again embracing the possibilities of technology and  harnessing modern, global sounds  to enhance his unique vision.