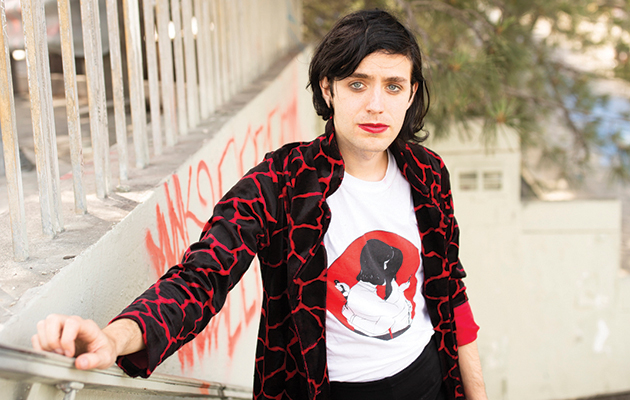 If self-help is often all about positive thinking, Ezra Furman has another idea: that there might instead be fulfilment in the opposite, in airing one’s worst thoughts. Indeed, Twelve Nudes, the songwriter’s eighth album, explores this with a blistering spin through anxiety, pain and socio-political ills du jour – from the insurance industrial complex (“My Teeth Hurt”) to the Israeli-Palestinian conflict (“Rated R Crusaders”) and sexual assault (“Trauma”) – sung over scrappy rock anthems. When the world around us goes to shit, Furman suggests, screaming is sometimes the only sensible response.

In many ways, the LP is the 32-year-old singer, songwriter and guitarist’s foray into punk, not only in its musical and lyrical characteristics, but also in its unedited pulse. It’s the sonic equivalent of a hastily stretched canvas splattered with a palette of raw truth, the paint spread by physical reaction rather than intellectual concerns.

Recorded hurriedly in Oakland, California, the 11 songs unfold in less than 26 minutes. It’s an emotionally charged acknowledgement of the pain and suffering endured by the world’s most vulnerable, and an indictment of the abuses perpetrated by the most powerful.

“I want to be a force to revive the human spirit rather than crush it, to open possibilities rather than close them down,” he says. “Sometimes a passionate negativity is the best way to do that.”

Furman cites the late Jay Reatard as a bastion of cathartic negativity in music. The Memphis garage punk was beloved for broadcasting his internal darkness over cacophonous pop-infused punk. His songs “It Ain’t Gonna Save Me” and “Blood Visions” endure as emblems of his unique duality, and inspired the similarly matched quality of Twelve Nudes.

Like Reatard, Furman gets quickly to the point: 80 per cent of the songs clock in at less than three minutes. One, at 56 seconds. And like Reatard, they screech with a lyrical wallop. “Nobody cares if you’re dying/’Til you’re dead,” he sings on “Transition From Nowhere To Nowhere”, an acoustic slow-burner that crescendos into an anthemic plea. “And if you’re really at the end of your rope/No you don’t take the night off/Too many demons to fight off,” he cries with urgency.

The three-minute track is an outlier among the harefooted lineup, but it stands out in its wit’s end posture, Furman’s alternate coos and howls chipping at the surface to reveal an utterly chilling core.

Twelve Nudes opens with “Calm Down aka I Should Not Be Alone”, an unhinged appeal for support amid the loneliness of our present dark days. The hightailing canticle transposes the rough-edged poetry of Springsteen onto the buoyant basslines and shouted backing vocals of pop-punk. It’s the album’s strongest track, and the catchiest channelling of worry this side of The Thermals. The Portland trio, along with Reatard, are prominent circles in the Venn diagram of musical identifiers for Twelve Nudes. Smaller orbs representing The Stooges, The Hold Steady and Springsteen are in there, too. But Furman’s distinctive shrieking, poetic phrasing and postmodernist perspective prevents the work from sounding overtly derivative. It instead borrows the best qualities of its forebears, and fuses them into something new.

This amalgam of heartland rock and punk continues through the album’s middle mark, “Thermometer”, a cavorting two-minute romp paying tribute to Furman’s saviour, rock’n’roll. Another love song, “I Wanna Be Your Girlfriend”, lightens the mood with cheeky Jonathan Richman-inspired narration. “My responsible friends are applying for jobs/But me, I was considering ditching Ezra and going by Esme/Baby, would you find that so odd?” he sings as less a tease and more a promise, over minimal, reverb-doused electric guitar.

The album concludes with a rhetorical question, “What Can You Do But Rock’n’Roll”. For a songwriter saved by music, it’s a lifesource; and for a society stripped of fundamental rights, it’s a last common thread. “You got no place you can go/You can’t go out/You can’t stay home,” he yowls in an expression of solidarity with the displaced and alienated, over boisterous drums, bass and guitar. In unleashing an indictment of the ills afflicting society, Furman not only creates a stunning protest record, he also stands as an example for action, channeling his power as a white male musician, with at least a modicum of visibility, to illuminate systemic abuse and the lives it plagues. Furman has no use for escapism. With Twelve Nudes, he’s exposed, but never still.