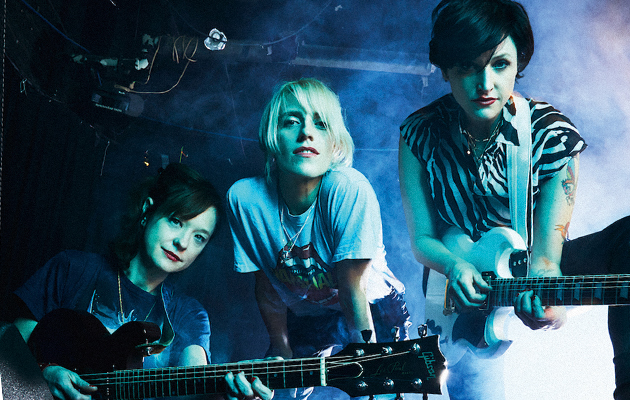 Ex Hex are one of the most effective and compelling career reinventions of the decade. After spending the ’90s fronting the Boston-based alt.rock warhorse Helium and the 2000s carving out a solo career, Mary Timony appeared to be settling into a cozy role as a cult artist, lionised among an ageing fanbase and touted as an underrated yet influential guitarist. In 2011 she joined forces with two-thirds of Sleater-Kinney (guitarist Carrie Brownstein and drummer Janet Weiss) to form Wild Flag. Despite having only one album to their name, that short-lived supergroup pointed the veteran indie rocker in new directions.

In 2013 she assembled a power trio with herself on guitar and vocals, Childballads’ Betsy Wright on bass and Aquarium’s Laura Harris on drums. While the trio had roots in Timony’s previous projects – they took their name from the title of her 2005 solo album – Ex Hex represented something new for her: taut, prickly power pop buffed down to its most essential notes and played with boisterous energy and a subversive interpretation of macho classic rock. They didn’t waste any time. Less than a year after playing their first live show together, the newly christened Ex Hex released (and quickly withdrew) a lo-fi single, signed with Merge Records and released their debut album, 2014’s Rips.

Ex Hex might have emerged fully formed and ready to rumble, but it’s taken them five years to follow up Rips. Mostly that’s down to the worthwhile distraction of a recent batch of Helium reissues and a sorta-reunion tour (co-founder Ash Bowie was unavailable to go on the road). It sidetracked Timony for most of 2017, but the diversion seems to have exerted a strong influence on Ex Hex, who return with an album that’s knottier and gnarlier than its predecessors. If Rips was about speeding the songs up while paring them down, It’s Real allows the band to stretch their legs a bit, to jam ferociously without looking at the time, to slow things down, to try out a few new tricks.

It, too, rips. One heavy guitar lick bulldozes into the next, as the instruments collide and bounce off each other rambunctiously. Working again with producer Jonah Takagi, the band play with a strutting confidence, extending opener “Tough Enough” into a rip-roaring coda and turning “Cosmic Cave” into a glam-rock stomper. Timony and Wright finish each other’s riffs the way some people finish each other’s sentences, as Harris keeps things moving at a fleet tempo. If the songwriting is not quite as catchy as it was on Rips, the playing more than compensates with its own earworm hooks and ingenious riffs.

There’s also room for slower songs like “No Reflection”, which achieves a sharply psychedelic melancholy as Timony apologises to an ex. “Send me a line”, she sings. “I’ll be better to you, baby, better this time”. These are bruised and tender lyrics in sharp contrast to the swaggering guitars, as Timony surveys relationships in various states of bitter disintegration on “Want It To Be True” and “Another Dimension”. But the heavy guitars aren’t providing ironic commentary on her tales of romantic woe. Rather, the riffs on “Radiate” and “Diamond Drive” supply the conviction to endure those predicaments and weather that confusion. “Oh yeah, you’re all alone and lonely”, Timony sings on the burbling “Radiate”. “Take me on, ride the radio wave to me”. Music – in this case, A-ha’s ageless hit “Take On Me” – can be the means of reconnection, if not healing. You rock out so you don’t feel quite so alone.

Unless, of course, you want to be. There are moments of warm levity on It’s Real, especially when the band blow somebody off. “Left me alone with the good times, while you brushed your rock’n’roll hair”, Timony sings on “Good Times”, savouring such a raw and ridiculous image. “I was trying not to care, alone on the beach counting rainbows in the air”. Like Rips, It’s Real is an album heavy with rock-historical reference points – the effervescent pop rock of Dwight Twilley and Cheap Trick, the heavy riffs of Free and even (on “Rainbow Shiner”) Black Sabbath, the bright harmonies of The Go-Go’s, the snarling attitude of The Runaways. Instead of a burden that must be overcome, Ex Hex find those touchstones to be freeing, as though interrogating so many decades of rock history is the most fun you could possibly have.