The Canyon party-starter who never cut his hair looks back 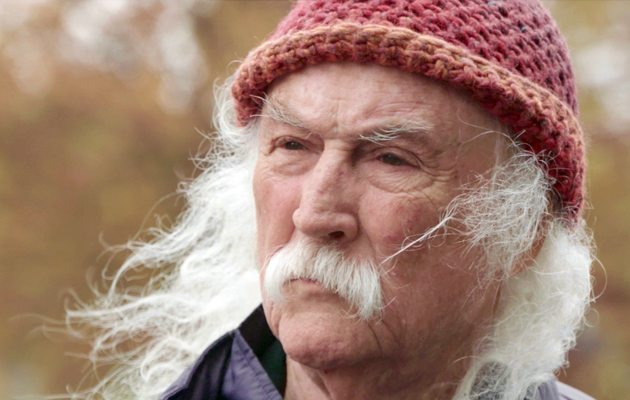 In recent years David Crosby has added a surprising coda to a career and life that few thought would last this long. He’s released four albums, more than doubling the size of his solo discography, and worked the road with a new band of millenial-age musicians. Most days you can find him on Twitter, earnestly answering questions from people younger than the new liver he received in 1994.

That’s the new-wave Croz captured in Remember My Name, directed by AJ Eaton and produced by Cameron Crowe. Happily and improbably, the years and substances haven’t eroded Crosby’s mind, they’ve just eradicated his filter, making him a candid, funny and regretful interview subject. When the filmmakers are as refreshingly honest as the film’s subject, the documentary succeeds as a corrective to the over-told narrative of ’60s rock, and the survivor’s guilt of watching that world’s sun set.

But first it spends the bulk of its runtime retracing those well-worn steps, travelling from the Sunset Strip to Laurel Canyon both historically and literally while interviewing Croz in the back of an SUV. Many of his most iconic moments included in the film are less musical than political, from spreading JFK conspiracies on the Monterey Pop stage to advocating for the abolition of car and oil companies on The Dick Cavett Show the day after Woodstock.

It’s telling too that many of the songs on the soundtrack are by other songwriters; even Crosby admits at one point to being “the guy in Crosby, Stills, Nash, & Young that’s never had a hit”. The story of “Ohio”, told over images of a modern-day, still-incensed Crosby visiting the Kent State campus, largely boils down to: “I gave Neil Young a magazine and he wrote the song.” If I Could Only Remember My Name is the one solo effort before his recent spurt to get significant airtime, and most of the stories are about Jerry Garcia and the other famous friends who showed up to help out.

The refreshing bits come when Crosby punctures the myth, dismissing the magic of Laurel Canyon as “we were trying to get above the smog” as he complains about photos of The Doors in the neighborhood’s still-extant country store (“Morrison… what a dork”). He’s genuinely contrite about the collateral damage of the Summer Of Love, guilt-ridden over friends and lovers who caught his addictions and his mismanagement of a rookie Joni Mitchell. And while his ultimate rock bottom – spending nine months in prison on drugs and weapons charges – is dealt with briskly, the footage of a shorn, cirrhotic Crosby is unsettling enough.

Then there’s the main niggling detail: throughout the film, nearly all of Crosby’s peers only appear in archival footage to comment about him, with virtually no contemporary interviews apart from the main subject. That pays off in a painful final sequence where Crosby admits that Young, Nash, and many other lifelong collaborators no longer speak to him, while the final appearance of CSN, absolutely bombing “Silent Night” in front of the Obamas at the 2014 White House Christmas Tree Lighting Ceremony, is shown in all its wince-inducing squirminess.

That bittersweet ending brings  the sadness underlying the film to  a sharp point, showing the darkness and mortality beneath his new cuddly Twitter Hippie Grandpa image. Throughout the doc, Crosby muses on the possibility of joining his dead friends at any moment,  and how each tour could be his  last. The most poignant image of  all just might be Croz dutifully taking his prescription medication in an early-morning hotel room, a stark inversion of his druggy, endless-party past.