Dave Evans – The Words In Between 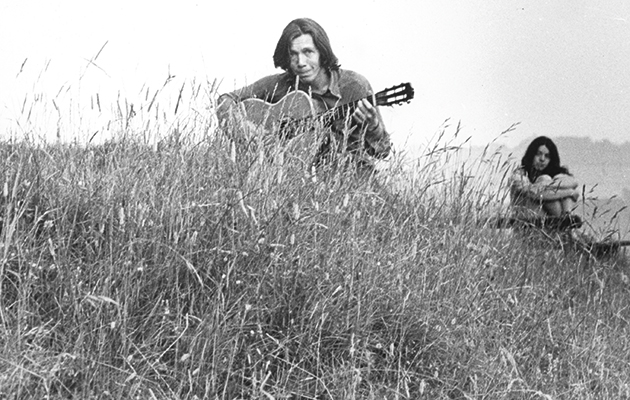 Bangor-born singer, songwriter and guitarist Dave Evans briefly popped up in 2010 on a compilation called Ghosts From The Basement, which raided defunct Bristol label Village Thing’s vaults from the early ’70s and featured tracks by Wizz Jones, Steve Tilston and label co-founder Ian A Anderson, among others. Two songs by Evans (one from this debut) were included, and although it hardly turned him into a household name, this seems to have nudged a wheel into motion.

Beyond that compilation, enthusiasts of  late-’60s and ’70s British pastoral folk might  have found Evans’ The Words In Between by following their love of Nick Drake to Tilston’s  1971 debut, An Acoustic Confusion, on which Evans played second guitar and sang. When Tilston invited his former flatmate to join him  in Bristol for recording, Evans was living in Honiton and working as a designer at the local pottery, but left a week after he got back and moved to Bristol, where he got a job as a road inspector and became a resident singer at the Troubadour. He released four albums and in the late ’70s moved to Brussels, where he still lives, repairing and restoring musical instruments  and playing for pleasure.

Evans has inevitably been overshadowed by necromancers of fingerpicking and alternative tunings, Fahey, Graham, Jansch and Renbourn, but his guitar technique – mostly performed on a distinctive, green-topped acoustic he made himself and using low-C tuning, plus the  odd percussive thwack – dazzles. Footage  of his Old Grey Whistle Test performance of “Stagefright” is mesmerising, and although  that song is from his second album, Evans’ playing on his debut impresses in an equally unflashy way. Rather than flights of mystic fancy, the songs are sweetly observed, quotidian vignettes often featuring characters he knew: the touching, Fred Neil-ish “City Road”, which depicts a day in the life of that Bristol street; and the forlorn but fond “Rosie”, the sketch of a woman (“Only very slightly round the bend”) Evans lodged with in Honiton.

The album – well received in its day – features Pete Airey on second guitar, harmonica player Keith Warmington and harmony singer Adrienne Webber, and was recorded in Anderson’s basement flat in Bristol, using two microphones plugged directly into a reel-to-reel. The setup suits both the intimacy of the songs and Evans’ light, unfussy voice, which is less mournful than Nick Drake’s, and shines particularly brightly on breezy closer “Sailor”.

It’s odd that it’s taken so long for new light to be cast on The Words In Between, given that archival interest in obscure ’60s/’70s British folk has never been stronger, but maybe Evans’ own character is partly responsible. According to former label boss Anderson, “He never really got motivated to the struggles of a big-time music career.” Accidental success for an ambivalent star, then – cult status guaranteed.