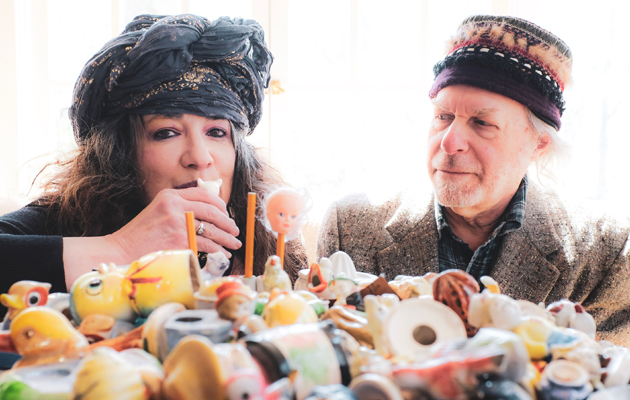 Listening to “Everything Is Your Fault”, which anchors the third album by the wife-and-husband team of Julie and Buddy Miller, is a little like listening in on a late-night argument. It opens with a gently picked acoustic guitar theme, but very quickly hardens and sours. A tambourine rattles in the background like the chains of a ghost and Buddy strangles notes out of his electric guitar, while Julie, who wrote the song, airs her grievances with unsettling directness: “You talk through me, not to me,” she accuses, then adds, “It’s so dehumanising.” On the chorus she comes up with the ultimate argument ender when she sings, “Everything is your fault,  in the whole wide world.”

One of the most eagerly anticipated Americana albums of the year, Breakdown On 20th Ave South sounds like it was born out of frustration and distance rather than harmony and union. In the 10 years since their last record – 2009’s Written In Chalk – Buddy has become an extremely busy producer, collaborator, sideman, and  even ship captain. In addition to tours with Jim Lauderdale, Emmylou Harris and Robert Plant, he has served as music supervisor on the TV show Nashville and hosted the Cayamo Cruise for Americana artists and fans, with stops in St Maarten and Tortola. Julie – herself a deft singer-songwriter with six solo albums to her name – spent most of the past 10 years at their home in Nashville, dealing with assorted medical issues.

In his absence, she wrote songs. Lots of them. Most were raw-nerved and even confrontational, as she waited for her husband to set aside the time to make another record with her, to follow up Written In Chalk. The couple recorded at home, playing almost all the instruments and hiring various drummers to sit in for a song or two. That alarming title suggests these songs are anchored in one place; they’re about her experiences at home rather than his experiences on the road. Julie emerges on Breakdown as the main creative agent, not only writing every song but singing lead on almost all of them and reportedly dictating the low-key, lowdown sound of the record. Buddy maintains his role as a sideman, helping to amplify her weariness even when it’s directed at him.

Written In Chalk was full of odes to impermanence, stark meditations on departure and death, and their voices blended together with a sense of collective mourning. Breakdown is somehow darker, exploring the destructive effects of love and commitment: how marriage might raise you up and drag you down, how it maims as easily as it heals. “Love will tangle up your thoughts,” they sing together on “Spittin’ On Fire”, about desire gone feral. “The heart won’t be denied, even when the lips you kissed are the lips that lied.” It’s always presumptuous to read too much autobiography into songs, but that’s a hell of a line to sing to each other.

Buddy, of course, is not the villain of the album, but someone similarly caught up in this storm of love and desire. He’s a sympathetic guitar player, his crisp picking underscoring rather than undercutting the sentiments in Julie’s songs. More crucially, as a producer for Richard Thompson, the Carolina Chocolate Drops and bluegrass legend Ralph Stanley, he specialises in homey-sounding records that try to erase the distance between artist and audience. Breakdown is similarly intimate – just two people making music together – even if the songs are meant to sound a little prickly, as though they might scratch you if you listen too closely. They only stumble when they look beyond themselves for inspiration: with its martial drums and strident pace, “War Child”, about the refugee crisis, sounds melodramatic more than outraged, and “Thoughts At 2 AM” defers to Dylan in how it addresses the times.

And yet, even on those two missteps, their voices just sound so good together: hers reedy and expressive, yet more guttural here than on Written In Chalk; his clear and high, somehow less grainy as he ages. Maybe that’s why this album ultimately sounds so generous and compassionate despite the many tensions it voices. It’s not about how a relationship falls apart, but how it holds together even in the toughest of times. That makes the sweet, hymnlike love song “Til The Stardust Comes Apart” sound like the album’s beating heart, its simple sentiments all the more powerful for being so hard won. “Our road may grow too hard with sorrow all around,” Julie and Buddy sing together, “but in each other’s arms we lay our burdens down.”