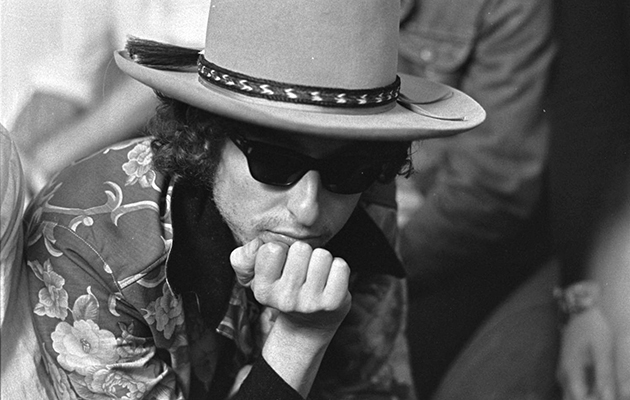 After the lonely crafting of Blood On The Tracks, Bob Dylan evidently needed company and collaboration. The summer of 1975 found him propping up bars with old cronies in Greenwich Village, making surprise appearances at the clubs where he’d made his name. He was also writing Desire and talking about going back on the road. Tour ’74 with The Band had been an unhappy trip. What he was thinking about now was more like a circus, maybe one of those travelling carnivals he writes about so fondly in Chronicles.

The romantic notion was to turn up somewhere unannounced, play a small club, split for the next gig. He put together a 10-piece band who called themselves Guam, rounded up some old friends – Bobby Neuwirth, Roger McGuinn, Ramblin’ Jack Elliott, Allen Ginsberg, Joan Baez. Dylan called it The Rolling Thunder Revue and it hit the road on October 30, 1975 at the War Memorial Auditorium in Plymouth, Massachusetts.

The Rolling Thunder back-story became so quickly fabled, the music made on the tour consequently seemed neglected, like a relative locked in an attic, talked about but never visited. It was 2002 before Dylan assented to The Bootleg Series Vol 5: Bob Dylan Live 1975, The Rolling Thunder Revue. It was a thrilling album. But its 22 tracks offered barely a hint of the musical booty fans were sure was out there, some of it tantalisingly heard in Renaldo & Clara, the film shot in tandem with the tour.

More of that will presumably appear in Rolling Thunder Revue, A Bob Dylan Story By Martin Scorsese, which Scorsese has assembled from the hundreds of hours of film accumulated by Dylan and his crew, to which The Rolling Thunder Revue: The 1975 Live Recordings is billed as a companion piece.

It’s a 14CD boxset, three discs of rehearsals, 10 discs of the five shows professionally recorded in their entirety and a final disc of rarities. The two CDs from SIR Rehearsals in New York find Dylan in what might be described as his element. Which is to say, at the centre of a certain amount of chaos. His approach to rehearsal is at best relaxed, if not entirely whimsical. There’s no obvious instruction, clarification of key, tempo or other apparently frivolous irrelevancies. Dylan seems happy enough to play the first thing that comes into his head – “People Get Ready”, “Lily, Rosemary And The Jack Of Hearts” – and leave it to the other musicians to somehow find their own way to fit in. The eight tracks on CD 3 were recorded on October 29 at the Seacrest Motel in Massachusetts and are effectively the revue’s final dress rehearsal. Several songs are still looking for arrangements, including “Hurricane”.

The first concerts ran to five hours, Dylan on stage for a little more than an hour. The shows had the same nightly format. Following an opening set by Guam and solo spots from McGuinn, Joni Mitchell, Ronee Blakley and Ramblin’ Jack, an unannounced Dylan strolled on stage, singing “When I Paint My Masterpiece”. He usually played the same six or seven tunes, mixing songs from Desire, still unreleased when the tour started, “Tangled Up In Blue”, more rarely “Shelter From The Storm”, and some older big-hitters, revisited in unpredictable ways.

On Tour ’74, he often sounded like a man trying to make himself heard in an air raid. There’s no greater evidence here of the mercurial phrasings of the 1966 world tour, and several times he sounds as if he’s halfway to turning into Joe Strummer, especially on livid versions of “The Lonesome Death Of Hattie Carroll”. At least he’s absolutely engaged again with his own songs, even if fans struggled to recognise some of his fearless reinventions, something they’d have to get used to in years to come. The version on Disc 13 of “Tonight I’ll Be Staying Here With You”, for instance, has a completely rewritten lyric and a careening new arrangement. It sounds like a room being ransacked. “Just Like A Woman” becomes increasingly theatrical in these performances. Dylan and Guam put a bomb under the revered “A Hard Rain’s A-Gonna Fall”, transforming it into a barnstorming roadhouse rocker, like something off Morrison Hotel.

After a brief interval, the curtain went up on a startling sight. Dylan and Baez sharing a microphone, as if it were Newport ’63. For all the sense their voices make together, though, Dylan may as well have been duetting with Damo Suzuki. When they actually sound as if they’re singing the same song, there are wonderful moments, not least “I Dreamed I Saw St Augustine” stunningly recast as a cantina ballad. Baez had a solo slot before Dylan returned for increasingly thunderous takes on songs from Desire, including versions of “Sara” as much blackmail notes as love song. The shows always wrapped with Woody Guthrie’s “This Land Is Your Land”, preceded by “Knockin’ On Heaven’s Door”, fabulous in every iteration, each with a bespoke lyric.

All the music on The 1975 Live Recordings is from the first leg of the tour. There was a second in April 1976, dates in the South, poorly attended, although by then Desire was a No 1 album. Dylan played the shows to recoup some of the money he’d poured into Renaldo & Clara. His mood was sour. Songs from Blood On The Tracks replaced the numbers from Desire and his performances were wrathful, apocalyptic. One of them, at Fort Collins, Colorado, on a cold, wet day, was filmed for a TV special. You can only hope the tapes are already on their way to Martin Scorsese.