Anna St Louis – If Only There Was A River 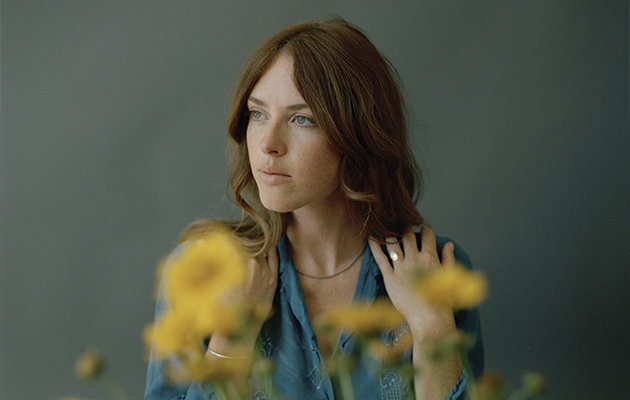 On her debut full-length album, Anna St Louis sings of landscapes and water, spiritual longing and heartbreak, with a tone and cadence that is unmistakably Midwestern in its clarity. It’s no coincidence that the LA-based songwriter hails from Kansas City, where the Missouri River – the longest in North America – was the anchor for an entire town, which was settled on the business of ships trading goods. In turn, her album trades in the magnificence of such quintessentially American touchstones, from the might of rivers to the mystique of the desert. It’s a meeting of West and Midwest that is decidedly unfussy and wholly refreshing.

So many new singer-songwriters step into a false Southern drawl for the sake of a dusty folk sound that it makes her delivery uncommonly bold. On If Only There Was A River, St Louis relies on her accent-neutral singing voice, anchored by John Fahey-inspired guitar riffs and simple strumming. At times the vibe recalls the heartworn reflections of Karen Dalton, who once lived in Kansas, but without the thick coat of misery. Instead, the airy, uncomplicated sound recalls a rural expanse, with St Louis’s hushed confidence guiding the listener through fields and along banks.

Something of a pastoral song suite, the album is bookended by metaphorical contemplations on water. “River” closes the LP with a meditation on longing, the river a conduit for cleansing and rebirth, a sort of biblical throwback that trades religiosity for matters of the heart. A backing vocal repetition of the phrase “if only” is provided by co-producer Kevin Morby, as St Louis strums and gospel-style organ deepens the groove. Opener “Water”, decorated by dancing violin and plucked guitar, likens the thrill of romance to the uncharted currents and depths of a secret swimming hole.

There’s a sense that St Louis felt great freedom in trusting her collaborators, whose contributions flesh out the acoustic-guitar-and-voice sound established by her cassette debut, last year’s First Songs. Drummer Justin Sullivan, who performs as Night Shop and also played in Morby’s band, is particularly valuable here, with a style that feels at once spontaneous and studied, powerful but not too tidy. His hand drumming on “The Bells” elevates the track from a standard folk platter to something cinematic and chilling as St Louis talks of looming shadows. “And the feeling is deep/Oh, the feeling is wide,” she sings, echoing the outward effect of the song. “Understand”, meanwhile, beautifully conveys the very toxic frustration that can accompany miscommunication between lovers. A simple plea underscores the agony: “Understand me to you/Understand.”

St Louis enlisted the studio talents of Morby, a friend from high school and from her days in Kansas City punk bands, to enhance her appealingly lucid point of view. Morby himself is a great contemporary example of a former punk who’s embraced folk, so it makes sense given St Louis’s similar pivot, and the fact that he released First Songs on his Mare Records imprint of Woodsist. The album was recorded at the home studio of Kyle Thomas, aka King Tuff, in the lush, hillside Mt Washington neighbourhood of northeast Los Angeles. There couldn’t have been a more appropriate setting for the work, a quiet upstairs room with a view, the birds and breezes drifting past as the group worked. It’s this palpable serenity, the tranquillity of working with friends, that emanates from each groove.

There’s something refreshing about leaning into what you have, rather than attempting to fabricate or invent something beyond yourself. In the case of St Louis, such reliance is her most apparent strength. In a proud display of unfussy, straightforward Midwestern simplicity she evangelises and elevates the very attributes key to the middle of America so often mocked and dismissed as ‘flyover country’. “Being from the Midwest means a certain tone is woven into one’s fabric,” Morby says in liner notes for the album. “And every now and then, someone comes along who has the power to convey that feeling in their cadence alone.” There’s perhaps no better endorsement for a songwriter who is unabashedly herself, practical to profound effect.