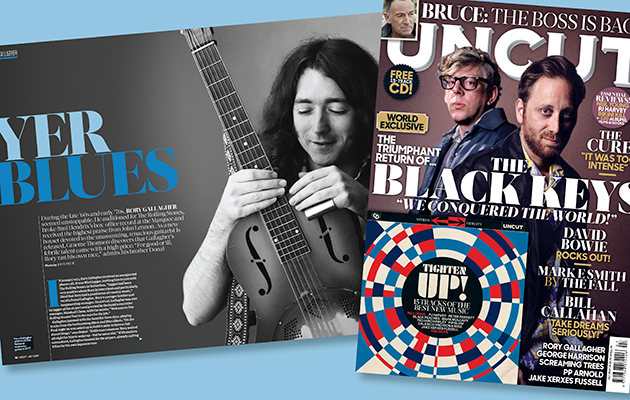 The new issue of Uncut – in shops now or available to buy online by clicking here – features an extensive profile of Irish blues guitarist Rory Gallagher, whose legend has only grown since his premature death in 1995.

In the piece, Graeme Thomson talks to Gallagher’s family, friends and bandmates to assemble a portrait of complex figure – a quiet, guarded personality who poured his heart and soul into his intense and febrile performances.

He also reveals how Gallagher almost joined The Rolling Stones. “[Mick] Jagger had been very positive about Rory in interviews and particularly liked that Rory had a good sense of country music,” recalls Donal Gallagher, Rory’s younger brother and longstanding manager. Gallagher jammed with the band for three days in Rotterdam, playing tracks from the forthcoming Black And Blue album. “On the final night he was asked up to Keith’s suite to have a chat  about things,” says Donal. “Keith was comatose. Rory waited all night for him to wake up – but he never did.” With matters unresolved, Gallagher headed for the airport, already cutting  it fine for his own Japanese tour.

In the end, Ronnie Wood got the Stones gig, and Gallagher continued ploughing his own unique furrow. Would the combination of a mercurial Irish bluesman and the world’s biggest rock’n’roll band have worked?  “I don’t think so,” says Gerry McAvoy, who played bass with Gallagher from 1971–1992. “Rory was a frontman in his own right.”

“Nobody could work a stage like Rory,” said Ted McKenna, Gallagher’s former drummer. “Clapton certainly couldn’t do it, not even Hendrix could. The energy level was frightening, quite honestly. He would wear a crowd out.”

“He’s the equal of any guitarist you might care to mention, and perhaps he doesn’t get the coverage he deserves,” adds his nephew Daniel Gallagher, who oversaw Blues, an illuminating new anthology of largely unreleased Gallagher performances. “But he didn’t care about being voted No 1. He didn’t want to be a superstar; he didn’t want  a cloak-and-dagger lifestyle.”

The quiet, handsome boy  from Cork possessed a fierce belief in his own abilities and an unswerving idea of what was best for his music. “He was such a private individual, all I could do was witness the artist in him and the torture he put himself through,” says Donal Gallagher. “For good or ill, Rory ran his own race.”

You can read much more about Rory Gallagher in the new issue of Uncut, out now with The Black Keys on the cover.