The Who on their new album: “The songs are fabulous” 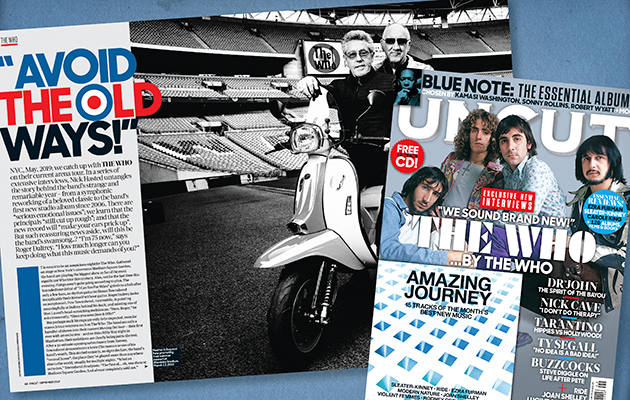 The new issue of Uncut – in shops now or available to buy online by clicking here – features a comprehensive interview with The Who about their incredible 2019: orchestral shows, old favourites revisited, and the upcoming release of their first new album since 2006.

In Nick Hasted’s feature, among many other revelations, Roger Daltrey explains how he overcame his initial reservations about the new Who material.

“Pete presented me with 12 demos,” the singer recalls. “And there were four, maybe five, of them which I really didn’t like. I thought it was a great Pete Townshend solo album. I told him that. And he got quite angry! He said, ‘I wrote them for you!’ I said, ‘Pete, I don’t know how I can improve it.’ I couldn’t see myself climbing in. I don’t know why. Maybe my passion for The Who’s started to disappear.”

Daltrey eventually modified Townshend’s words till he could sing them. “I said can I change the tense of that song, and move it from being an ‘I’ song to being inclusive? Pete said: ‘Yeah.’ So slowly but surely I climbed into it. I don’t think anyone’s ever understood, including Pete, that doing what I do with his songs is certainly not fucking easy. You have to live them. Do I have to change the songs till I can mean them? Yes. It has to come from my heart. It can’t come from my head. When it comes from my heart, I will touch you with those words. Sometimes I have to change the words to make that possible.”

By May, Daltrey had nearly finished his vocals for eight songs. He prefers to work nowhere near their writer. “Pete [initially] wanted this album out for June,” he says. “So I went under incredible pressure to a little studio near me in Sussex, and I didn’t have time to bugger around with a new producer. I got Dave Eringa, who produced my last solo album and the Wilko Johnson album, because he knows how I like to work. I went into the studio for eight afternoons – because I can only do three hours at a time. I don’t let my voice get worn out at all these days. When I record, I like to do it like I’m a painter. I sketch. I dab notes on, and go away and live with it for a while. Then I went in one day, after I’d done all my sketches, and did the whole thing.” He’s satisfied with the results. “I have to say it’s a far better Who album than it is a Pete Townshend album! I mean, I don’t know what people want out of The Who any more. But the songs are fabulous.”

Townshend summarised those songs, tongue in vicinity of cheek, as “dark ballads, heavy rock stuff, experimental electronica, sampled stuff, and clichéd Who tunes that begin with a guitar that goes danga-dang”.

“I’m not too sold on the electronic stuff,” Daltrey considers. “Generally I find that stuff now is dated. I love guitars. And I love the bass guitar in particular. And he’s my favourite all-time guitarist. All the other guys are technicians and they’re brilliant, and they might be fast and they might be slick. Townshend’s always original. And that for me is everything. He’s always searching.”