Mick Jagger: “He pulled out all the stops at five in the morning”

How The Rolling Stones frontman saved Rock And Roll Circus 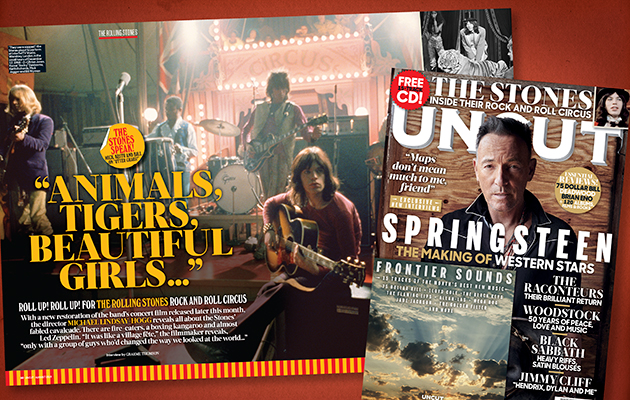 The new issue of Uncut – in shops now, or available online by clicking here – includes an oral history of The Rolling Stones’ Rock And Roll Circus, the legendary 1968 concert film which found The Stones performing in full circus get-up alongside John Lennon & Yoko Ono, Eric Clapton, The Who, Marianne Faithfull, Taj Mahal, Jethro Tull and a troupe of fire-eaters.

Talking exclusively to Uncut, the film’s director Michael Lindsay-Hogg remembers how, amid the chaos, The Stones were in danger of fluffing their headline turn – were it not for the determination of their indefatigable frontman, Mick Jagger.

“The Stones didn’t come on until two in the morning. They were the hosts; they’d been there all day, and we were now into December 12. The cameramen were weary. We did a couple of takes of each song. Glyn Johns and Jimmy Miller in the truck outside would ask for another take, or I would ask. Gradually, it started grinding them down. It had been a long day, and they were sapped.

“They were young and strong and vital, but they were also a bit wobbly – especially Brian, but also Keith. Pete Townshend said that Keith alternated between looking green and yellow – who knows what he was doing? – and Brian really wasn’t well. He’d let himself go, and didn’t have the constitution for it. It was sad. The night before the first rehearsal, he called me at 11pm and said, ‘I’m not going to come tomorrow. They’re being so mean to me; I don’t feel part of The Rolling Stones any more.’ I said, ‘You have to come, you are The Rolling Stones.’ So he did, but he was alienated.

“’Sympathy For The Devil’ was the one we’d all looked forward to. Coming up to five in the morning, we did a take, and it was no good. Mick, Keith, me and Allen Klein met and said, ‘Can we go on? Is it going to be dwindling returns? Shall we come back the next afternoon and try it again?’ But that wasn’t viable, it would have cost too much.

“Mick talked to the Stones and said they were going to do it. I talked to the camera crew and said, ‘This is going to be it.’ Mick then gave as great a rock’n’roll performance as I have ever seen. That’s him pulling out all the stops at five in the morning, pushing the entire band through. He’s saying, ‘Let my will be your will.’ It’s extraordinary. He used the camera as the audience. That’s what’s so interesting about the Stones’ performance, the connection between Mick and the camera, especially on ‘Sympathy For The Devil’. Pete said he really understood Mick Jagger for the first time that night, how he commanded the attention of the camera. For my money, he’s one of the three greatest performing artists of the last century.”

You can read much more of Michael Lindsay-Hogg on The Rolling Stones’ Rock And Roll Circus in the new issue of Uncut, on sale now with Bruce Springsteen on the cover.