The making of Bob Dylan’s Blood On The Tracks: “We were racing to keep up” 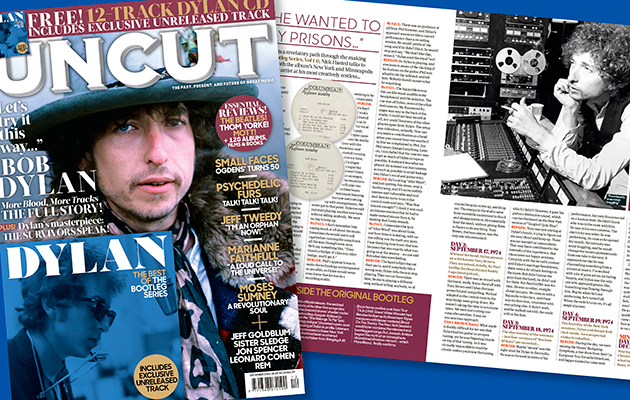 To mark the release of More Blood, More Tracks – The Bootleg Series Vol. 14, the new issue of Uncut – in shops now or available online by clicking here – features a comprehensive investigation of the making of Bob Dylan’s Blood On The Tracks.

The issue also comes with a free CD – Dylan: The Best Of The Bootleg Series, a unique 12-track compilation featuring a track from each instalment in the Bootleg Series and an exclusive preview of More Blood, More Tracks.

Our fascinating oral history of the album’s legendary sessions at A&R Studios in New York and Sound 80 Studios in Minneapolis features contributions from the musicians who were astonished to suddenly find themselves by Dylan’s side.

DAY 1: SEPTEMBER 16, 1974
GLENN BERGER [assistant engineer]: I was 19 in September 1974, working for Phil Ramone as an assistant engineer. My first session had been with Paul Simon, who could take  a year to make a record. And then Dylan came in and appeared not to care about the production at all. He didn’t care who the musicians were. There was no producer. Phil was just the engineer. It was mind-boggling.

THOMAS McFAUL [keyboards]: Dylan was already at A&R [studios] when I arrived. He was cordial at the outset, asked us if we wanted to go on the road with him, said he wanted to play only prisons. Before we started recording, Dylan was sipping grain alcohol from a paper cup, but I don’t recall him ever seeming to be intoxicated.

BERGER: Dylan came onto the studio floor with the musicians and started running down a tune.  If a singer-songwriter doesn’t have  an arranger,  the musicians will take two  or three hours minimum learning the tune and coming up with arrangements. We never got to that point. Dylan would just start playing another new tune without telling anybody. We were racing to keep up.

McFAUL: I don’t remember him saying much at all about the music. Sometimes he would ask to roll  tape before running the song down all the way through even once.  He’d say something like, “Then there’s a bridge; it’s like any other bridge, you’ll get it.”

BERGER: He’s cutting “Idiot Wind”, and just spitting this mean, angry, hurtful song, and it’s so incredibly intense and vulnerable and real. And then he turns to us in the control room and says, “Was that sincere enough?” I think it was such an intense emotion that he had to make some distance from it, by making that funny remark.

McFAUL: I remember the lyric  of “Idiot Wind” was about fame,  and how fame is isolating, with no one telling you the truth any more.  I was thinking how ironic that was because that was exactly what was going on at the session – no one told Bob what they were feeling.

You can read much more about the making of Blood On The Tracks, plus our definitive review of More Blood, More Tracks – The Bootleg Series Vol. 14 in the latest issue of Uncut, on sale now.