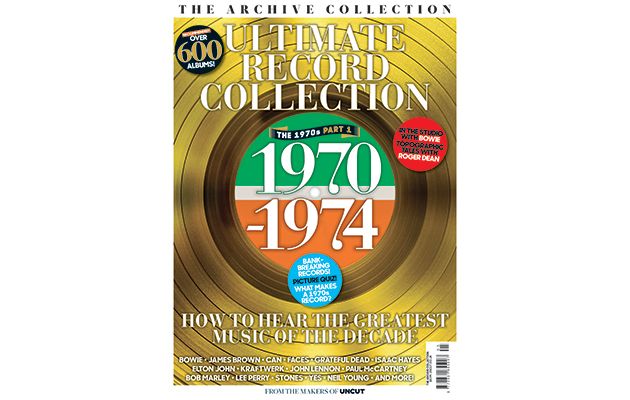 You will, I’m sure, have noticed that we have a splendid new issue of Uncut in shops right now – or you can buy a copy online now – featuring The Black Keys, David Bowie, The Cure, Bill Callahan and plenty more.

This week, though, we launch the latest spin-off from our Ultimate Record Collection series – focussing on the rich, musically fertile albums released during the first half of the Seventies. This new volume is in shops from Friday but you can buy a copy from our online store now.

As John Robinson, our one-shots editor, explains below, you will read a lot in this exquisite edition about how to hear (and buy) the greatest music of the period. The major players are profiled while Uncut’s crack team of contributors recommend 600 albums for your aural pleasure. Here’s John…

“In addition to its cost, the price ticket on a record can sometimes convey a greater sense of character, even an ethos. I was recently talking to someone who had seen a record priced with some helpful context for the casual punter: ‘Pre-Wings’. (It was a copy of Revolver.) One of the shops I have spent a lot of time in ran to the standard informational (‘Scarce’; ‘Rare UK orig’, and so on) but also the more poetic. I once saw a copy of Forever Changes in there, priced up with the detail ‘Sad is the home without this’.

“This magazine, the second in our Ultimate Record Collection decade series, hopes to offer you something like that kind of helpful pointer. As you’ll read in Jim Wirth’s excellent introduction to the period we cover here, the 1970s was a boom period for the record business (so much so, we’ve had to approach the decade in two parts), and the long-playing record entered its imperial phase. Adventurous record companies who enjoyed the success of big hits reinvested their profits in more experimental artists. Artists, in turn, gained greater control over their own music and were able to break out of format to create visionary work. Audiences felt rewarded and challenged – and were prepared to sit down and really listen, engaging with a wider variety of sounds.

“The period 1970-4 was dominated by some culturally pivotal, huge-selling artists, and here you’ll be able to read thoughtful summations of the work of, to name a few, The Band, David Bowie, The Rolling Stones, James Brown and many more. We’re also privileged to have been able to speak with Ken Scott, whose apprenticeship found him engineering at Abbey Road on Beatles records. Coming into his own in the 1970s, he then worked on albums by such cornerstones of the period’s music as John Lennon, Bowie and Elton John. As you’ll discover, Ken was well-placed to see what changed. Elsewhere, Roger Dean, whose fantastic sleeve art was synonymous with the early 1970s listening experience, tells us about how an album of the time was “an amazing gift”.

“In this magazine, there are around 600 such potential gifts. There are rocks hard, soft and glam. There’s funk, socially-conscious soul, music by reggae producers and deejays, and singer-songwriters. There’s music from astral planes, bedrooms and motorways. And even if we can’t actually give them to you, we can certainly point you in the right direction in a time where music choice is almost limitless.

“On a lighter note, we’ve listed some very expensive albums and suggested why they cost so much; anatomized what makes a early 1970s album an early 1970s album; made some suggestions about how you might find your way through this huge volume of great music.

“There’s even a short quiz. It’s a rare find, especially in this condition.”