Our latest addition to the Uncut family revealed! 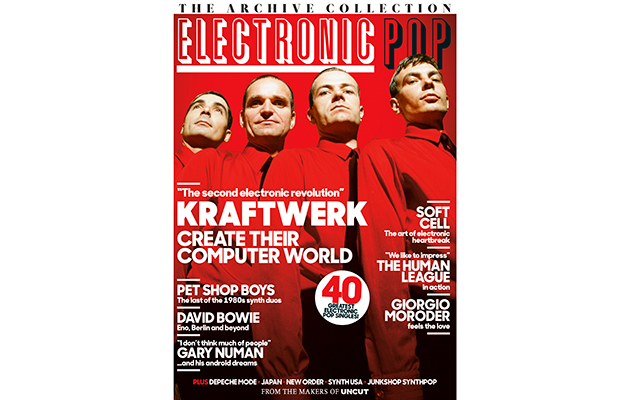 A quick one from me this week, as I’m running between meetings, an album playback and writing, but just to remind you that the current issue of Uncut is on sale – you can read more about it here.

Also in the shops this week is our latest Ultimate Genre Guide. This is dedicated to Electronic Pop, and very fine it is too. It’s in shops now – or you can order it from our online store by clicking here. Here’s John Robinson, our one shots editor, to tell you more about it…

So why electronic pop, and not just “synth pop”? For this latest edition of the Ultimate Genre Guide, it’s mainly a question of not wanting to narrow unduly the broad and interconnected world of music made with electronic instruments.

Certainly, an important part of this magazine reflects the triumphs and the personalities of that vivid period in UK pop which Neil Tennant (himself one half of “the last of the 1980s synth duos”) remembered as being a time when “art students were in charge”.

He’s talking Human League, Soft Cell, Heaven 17, Art Of Noise and many of the bands that you can find written about in this magazine. No-one ever called New Order or Depeche Mode students, but in a time when a population was still getting its head around the concept of the video recorder, they too were in the vanguard of bands presenting startlingly modern pop.

But inside, you’ll also find coverage of events either side of this tuneful explosion. You’ll hear from Brian Eno and Tony Visconti, who have just spent a productive time with a rejuvenated David Bowie, fresh from making (i)Low(i) in Berlin and discernibly under the influence of the music made by Cluster at Forst and by Kraftwerk in Dusseldorf.

Kraftwerk’s influence, getting stuck into the wires of electronic music before it even had a circuit diagram, is a key feature of the magazine. At this early stage, experimentation feels a bit more a matter of actual electronics, hands-on and slightly untidy – more to do with cables and soldering irons than simply slickly selecting an attractive sound and writing a song. As Giorgio Moroder describes it, it can be a pretty basic business.

At one end of this, this means Bernard Sumner as he describes himself in his autobiography: late at night in his parents’ home, assembling the synthesizer kit which will help plot Joy Division’s journey into New Order. Emerging at the other end of the 1980s, it will come to mean the fragmenting of Kraftwerk’s initial electronic template into new and unexpected shapes. Following the trail will lead in one direction to electro and hip hop, in another to techno and all points north. As you will read, electronic pop’s beat moves between continents and can still be heard loudly today.

Inside this magazine you will be able to read deep and insightful new writing about the key players from within this movement, and entertaining archive features about them. As much as these groups might have effected a technological/artistic revolution within mainstream pop, it’s refreshing to see that some fundamental features of the engagement still apply: it’s all about the music, but “larks on tour” remains a trope of rock writing that remains intact from earlier times. As much as the players in this magazine embrace technology, these are still vibrant and driven personalities much as we ever knew them.

As you would maybe hope in a musical form, in its first decade or so electronic pop evolved and became more widely appreciated – a development you might see embodied perfectly by the Human League’s evolution from college project to chart success – but never quite became domesticated. Things certainly became tidier, less prone to blow a fuse, but the music could still unsettle the order of things. For some the polished productions of the Pet Shop Boys exemplified the flashiness of the mid 1980s. A rather more attentive listen, however, revealed that the band were coldly evaluating their times – and, as you might hope, keenly pushing on into the future. See you there!