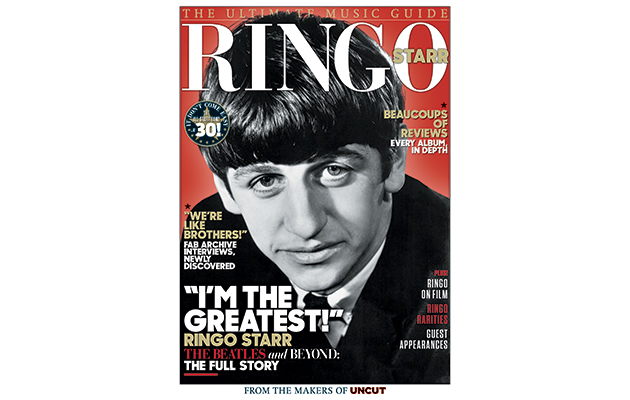 A telephone line crackles. “Hello,” says a voice, “it’s Ringo here.” My sole encounter with Ringo – to date – is a phoner interview. 30 minutes, on the button, for Uncut’s An Audience With… feature. Even so, despite these unpromising circumstances, the interview itself was great fun. Conducted while Ringo was holed up in an LA hotel doing press for his then-current album, Postcards From Paradise, here was a man of not inconsiderable wit and charisma, whose opening line went, “I was just in the car coming here, ‘Eight Days A Week’ was on the radio and it rocked.” Fair enough, you might think.

Ringo’s mood – playful, generous – was perhaps encouraged by the fact that the questions – submitted by readers as well as fans and contemporaries including Paul Weller, Marianne Faithfull and Jeff Lynne – were not restricted to those magical eight years in the Fabs. Starr gamely fielded questions about Twitter, Butlins, Peter Sellers, Harry Nilsson and Frank Zappa. He also provided some amusing insight into the early ’60s rivalry between the era’s top tier. Did you have any good nicknames for other bands?, went one question. “Bastards,” he deadpanned without missing a beat.

If anything, the interview proved Ringo was a man of many accomplishments – both with and outside of The Beatles. As our latest Ultimate Music illustrates, Ringo wore many hats – Beatle, solo artist, actor and latterly band leader with his All-Starr Band collective, now in its 30th year.

You’ll find all these different elements brought vividly to life in archive interviews from Melody Maker and NME, brand new in-depth reviews of every Ringo album, Ringo on film, rarities, comps, lives and much more. It’s in shops from this Friday — but you can buy it right now from our online store.