Our new issue is on sale from May 16 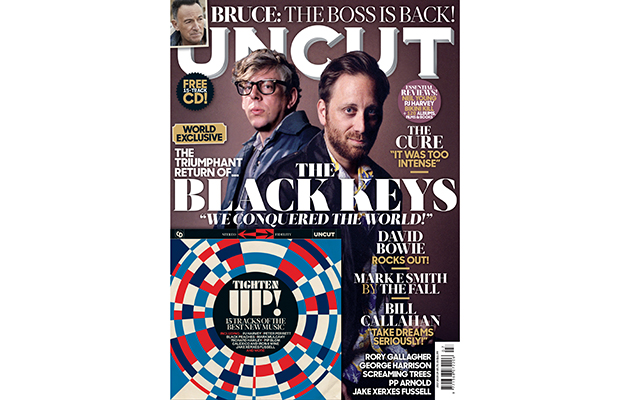 I’m writing this in mid May and, as we’re almost halfway through the year, I thought I’d dwell for a minute or two on the state of music in 2019. I think we always tend to make claims about the high quality of new music in any given year, but it genuinely feels like we’ve enjoyed a particularly strong run of albums in the last since months. From Sharon Van Etten, Cass McCombs, Steve Gunn and William Tyler at the start of the year through Lambchop, The Comet Is Coming, Weyes Blood and Aldous Harding to Jessica Pratt, Julia Jackin, Kel Assouf and Big Thief, it feels – dare I say it – like a vintage year in the making.

This month in Uncut – on sale from Thursday but available to pre-order here – you’ll find us writing about more marvellous new music, including Bill Callahan, Jake Xerxes Fussell, Rose City Band and The Black Keys – who make their debut as Uncut cover stars this month. In a frank and revealing interview with Jaan Uhelszki, Dan Auerbach and Pat Carney take us to their Nashville haunts – from a favoured Greek diner to Dan’s Easy Eye Studios and Pat’s home – and share the inside story of their splendid new studio album, “Let’s Rock”. Elsewhere, Stephen Deusner travels to Durham, North Carolina to meet Jake Xerxes Fussell – whose latest album, Out Of Sight, is one of my favourite albums of 2019 so far.

In many respects, I hope The Black Keys and Fussell represent the best of what we’re trying to achieve here at Uncut. Both artists are steeped in their respective traditions – in The Black Keys’ case, the growl and punch of classic rock, while Fussell delivers spry interpretations of American folk song – but are driven to recontextualise their influences for our own age. Says Fussell, “I knew a lot of musicians who weren’t necessarily wearing clothes that we picture when we think about this kind of music. They might be wearing a Nike tracksuit and playing songs from the 1890s. It was all mixed up. For me it continues to be mixed up, and that’s what I’m trying to get at when I’m playing these songs.””

Meanwhile, as usual, our free CD brings you the best of the month’s new music – from PJ Harvey and Peter Perrett to Vanishing Twin, Crumb, Olden Yolk and Black Peaches among others. And then there’s in-depth reads on David Bowie, The Cure and Rory Gallagher, a celebration of The Fall’s finest albums, the return of PP Arnold and a classic from Screaming Trees.

As ever, let us know what you think at uncut_feedback@ti-media.com.