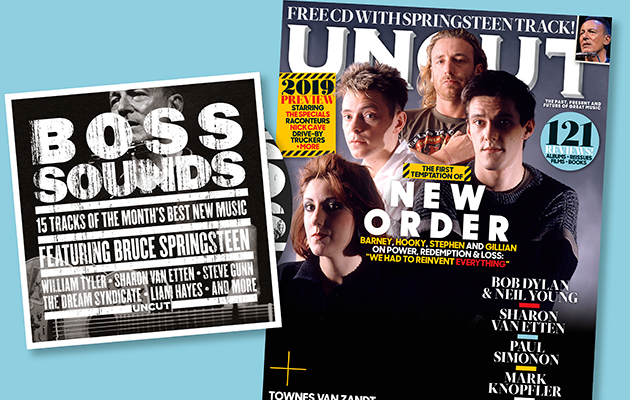 The news of Pete Shelley’s death broke just as we started sending this issue to the printers. Although we were unable to make any changes to the front cover – that had already printed – we were able to do some last minute juggling around with our features to accommodate Jim Wirth’s substantial tribute to Shelley, which you’ll find inside.

By coincidence, Shelley isn’t the only Manchester icon celebrated in the new issue of Uncut. Our cover story finds Bernard Sumner, Peter Hook, Gillian Gilbert and Stephen Morris recalling the early days of New Order. The four principals take us from messy beginnings in insalubrious Manchester rehearsal rooms to the brink of international stardom via New York nightclubs, wintry European cities and a 1932 exhibition poster by the Italian Futurist artist Fortunato Depero. Along the way, we meet the mysterious Witchdoctors Of Zimbabwe, a Hell’s Angel with a taste for LSD and learn about a particularly wild run-in with Britt Ekland’s brother. There are revelations, humour and – nearly 40 years on – great wisdom from New Order’s original members.

“It’s always been about the future,” Sumner says. “Right from the early days of Joy Division, I always had a nagging thought in the back of my head: wouldn’t it be fabulous if you could move music forward?”

Our free CD features the best of the month’s new music – including a track by Bruce Springsteen – while our reviews section is crammed with brilliant new albums by William Tyler, Kaia Kater, Julian Lynch, Deerhunter and Liam Hayes and reissues from the Third Ear Band, Eric Dolphy, the Glands and Green River.

Welcome to the new Uncut, then.