Welcome to this updated version of our legendary Zeppelin special. Valhalla, it is coming! 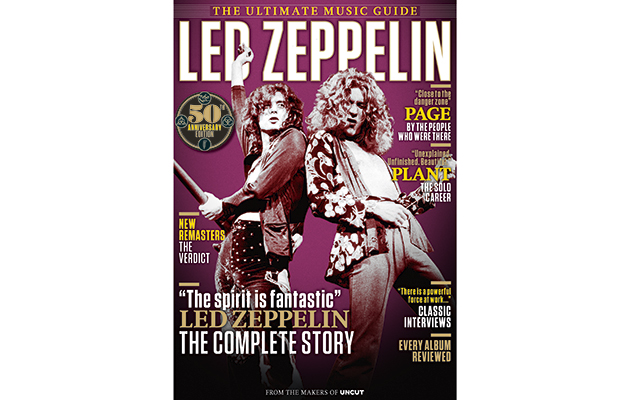 A few years ago, standing in the grounds of Ludlow castle, Robert Plant recalled the very first time he left the UK. This was September 1968, when Plant was a mere 20 years old. The reason, of course, was Led Zeppelin’s first concert tour (though for contractual reasons they were billed as the Yardbirds). “I’d only travelled on this group of islands until then,” he told me. “We flew to Denmark. John Bonham and I had never seen so much cutlery in our lives as on that aeroplane. We couldn’t get enough of it into our bags to steal it to take home…”

Led Zeppelin’s remarkable journey from the Gladsaxe Teen Club to the stage of the O2 Arena and beyond is celebrated in the latest handsome special edition from the Uncut family: a deluxe and updated version of the Led Zeppelin Ultimate Music Guide. This volume goes on sale from Thursday, but you can buy copies now from our online store by clicking here. Here’s our one-shots editor John Robinson to tell you all about it.

Whether you catch up with him via his interviews, his occasional appearances in tabloid newspapers or listening to his most recent work – his scrupulous remasters of the Led Zeppelin catalogue – a thing you will know about Jimmy Page is that he always has a plan. “He’s always doing something,” his former neighbour, the late Michael Winner tells an Uncut reporter in feature you can find inside this volume. “It’s a 30th anniversary… We’re making a video… Re-doing the film…”

In summer 2018, we are entering another phase of the guitarist’s grand, but meticulous design. 2018 marks the 50th anniversary of the first gigs by the band that became Led Zeppelin, and to celebrate the fact, September sees the release of a remastered edition of the band’s soundtrack/live album The Song Remains The Same. There’s a book coming. Knowing what we know about this musician, though, it seems unlikely that these releases alone will mark the end of Zeppelin’s golden anniversary story. As they always have around this group, rumours are circulating.

As you will discover in this deluxe and revised edition of the Ultimate Music Guide to the band, such attention to detail has been Page’s mode since the beginning of his career. Here he is, London’s only session man to have a public profile, behind the scenes but not, declining a spot in the Yardbirds, recommending a substitute, then joining the band later when the time is right. Here he is again, biding his time, scouting for a band, paying for the recording sessions, trying the music out abroad. Above all, retaining control of the material.

This level of control now seems key to the success of the Zeppelin enterprise. As the remasters of the studio albums, with their discs of “companion audio” have shown us, this was not a band to run wildly from the first lightning strike of a song. As producer, Page instead calmly fine-tuned, his meticulous vision dedicated to maximising the spontaneity and energy of a composition’s first hit.

Live, however, all bets were off. Whereas the records were all about focus, the band’s shows were all about grandeur and energy, getting longer and longer as they attempted to express all they wanted to say: rock ‘n’ roll covers, blues, violin bow invocations, even – the apparently very popular – drum solos. In 1972, on their summer US tour [from which the How The West Was Won album was later drawn] they returned home to express their joy at how well it had all gone. “Something has really clicked,” Robert Plant enthused. “The scenes have possibly amazed you,” added John Paul Jones.

True enough, reporters from NME and Melody Maker were impressed. The band were allegedly guarded around the press, but you’ll find little evidence of that in the eye-opening archive pieces you’ll find collected here. In one part of the magazine, Uncut’s writers survey the arc of Zeppelin’s recording career arc, from their early primal swing, to the modal drama of their imperial period and their unexpected early descent. Elsewhere, classic interviews and reportage pieces testify to many of the amazing experiences Jones speaks of.

When the band reconvened in 2007 for a one-off show, it seemed as if such scenes were again still completely possible. Perhaps something similarly incredible may yet happen again. But if there is a plan it’s one that, for now, Jimmy Page is keeping very much to himself.