Our latest deluxe release on sale from August 8 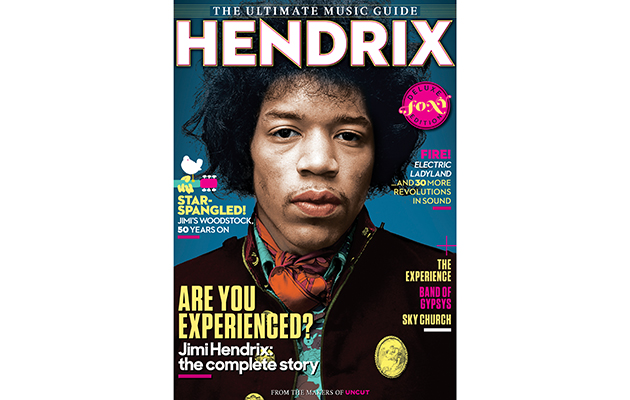 A few months ago, in Uncut, the photographer Henry Diltz reflected on Woodstock – the festival at which he had served as official photographer. “When people ask me for my highlight of Woodstock, there’s no question that Jimi Hendrix was the riveting moment,” he told us. “He started playing that solo version of ‘The Star-Spangled Banner’ and my immediate thought was: ‘Why is he playing this? That’s not our hippie anthem.’ But then I realised, ‘No, that’s our  song. We’re reclaiming that!’”

You can read more about both Woodstock in our upgraded Ultimate Music Guide, celebrating the genius of Jimi Hendrix, which is on sale later this week. There, in John Robinson’s vivid oral history of the festival, you can discover secrets and insights into this storied event – and of course, Hendrix’ role in it all. That is just one of several new features included in our deluxe, enhanced Hendrix UMG: there’s Peter Watts’ compelling read on Electric Ladyland as well as a 1969 Melody Maker feature by Bob Dawbarn, as well as other updated bits and bobs on live albums and films. It’s in shops — and available to buy from our online store here.

Here’s John Robinson, our one-shots editor, to tell you more.

It’s not the sort of remark that you especially want to hear on a transatlantic phone call, hoping for a fresh insight on a musician long since passed away. Still, the more time you spend talking to them, you can understand how his intimates often found it hard to summarise succinctly the mercurial nature of Jimi Hendrix the person, and the sheer scope of Hendrix the musician.

In this revised, updated and splendidly embroidered deluxe edition of our Ultimate Music Guide to the music of Jimi Hendrix, you’ll meet many of those Jimis. The psychedelic pop star blowing minds – and revealing prejudices – in swinging London. The socialite jam sessioneer, sitting in with a vast roster of musicians, all the while considering his next move. The adventurer breaking with a proven musical path to try and accommodate the ideas – musical, social, spiritual – which were in his head.

There’s a core body of work here, in which these artistic personae are represented. The magnificent first trio of albums (“all you really need”, according to the late Alan Douglas, a friend to and once- controversial producer of Hendrix’s posthumous work) are a feast of new sonic worlds, science-fiction soul and rootsy rock’n’roll. Noted for their guitar fireworks and disorientating effects, they are also witty, strange and sexy.

Band Of Gypsys was the first album to fully break with the work presided over by Chas Chandler – but it also sent a smoke signal to warn of the issues that would trouble Hendrix for the remainder of his life. These weren’t due to any difficulty imagining where he might go next, so much as trying to narrow down a route across a vast map, and choosing the personnel for the trip.

There were tantalising glimpses (at Woodstock, with Gypsy Suns And Rainbows, featuring additional percussion and guitar) and with his more abstract plans for a “Sky Church”. The self-appointed mission of Hendrix custodians since his death has been to resurrect these ideas and compile them into some kind of order, a mission itself never completely fulfilled, Hendrix’s posthumous legacy eluding definition, Jimi being Jimi, as much in death as in life.

Through revelatory archive interviews – Such plans! Such humility! What a sweet sense of humour! – and incisive writing, this magazine will help you find your own path through the realms of Hendrix’s life, work and imagination, but there’s more than one way through.

His story features inspirational music, some painful lessons and some missed opportunities, but its main lesson is about inspiration. To those who have followed him, Hendrix’s work is about maintaining a hunger for creative expression, wherever it may lead. That, as Jimi put it, is “straight ahead”. It’s too bad our friends can’t be with us – but, happily, his search for the next horizon continues.