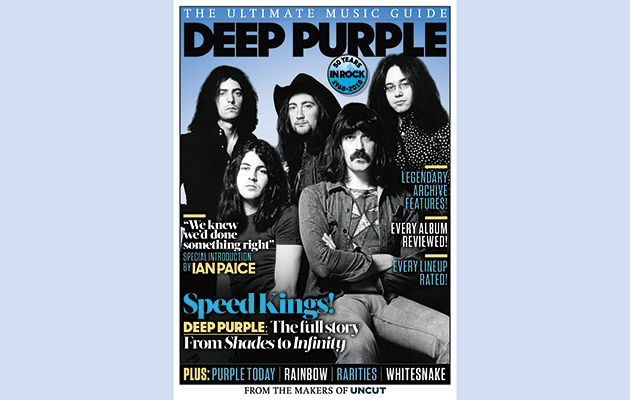 As Deep Purple geared up for their Long Goodbye Tour in early 2017, Ian Paice had a few thoughts on the band’s long and storied history. “The records will remain, or they won’t,” he told Uncut. “But it’s about how you affect people around you. The people we’ve inspired to pick up a guitar, get a drum kit or a microphone. That’s the best legacy.” Meanwhile, his bandmate Ian Gillan had this to say about the bands most enduring qualities: “The primary driving force of it all was the sheer abandoned joy of making music together. And that has stayed with us.”

As you might have gathered by now, Deep Purple are the subject of our latest Ultimate Music Guide – a celebration of 50 years in rock, no less, with new writing on each of their albums and a series of classic archive features, many unseen since original publication. There are digressions into Rainbow, an invaluable miscellany and… the Deep Purple family Venn diagram!

The issue goes on sale Thursday, September 13 – and you can order a copy now from our online store.

“Nobody expected Deep Purple to be here fifty years on, still having fun doing something that people want to see and listen to. That’s an amazing thing. I don’t think any one of us gave the anniversary a conscious thought. It’s been there so long – it’s what you are and what you do.

“The moments of inception have been the fondest memories. Once I’d got the job in ’68, that was amazing, balanced by the feeling of absolute desolation when the band destroyed itself. Any band that’s been around for any duration has had a rocky road. You’re asking four or five totally different characters to deal with each other in a very high-pressure situation, over a long period of time. Like a marriage, it doesn’t always run smooth. When you’re going around the world, you’re all you’ve got. The fact that you are under this compressed social circle means that occasionally it does get volatile.”

Dealers, guns and pimps: dark clouds hover over the creation of There's A Riot Goin' On
Advertisement
Blogs