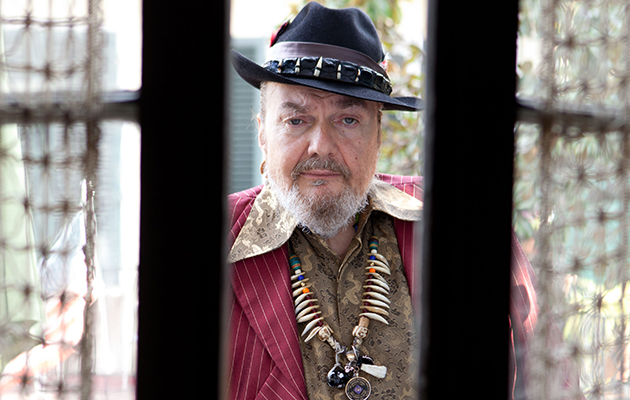 It’s been revealed that before his death from a heart attack last week, Dr John AKA Mac Rebennack completed a final album that is now poised for a posthumous release.

No title and release date has been confirmed as yet, but the album is described as a stripped-down, country-tinged effort featuring several Hank Williams and Johnny Cash covers, reworkings of Dr John classics “Such A Night” and “I Walk On Gilded Splinters”, and four brand new uptempo originals.

The album features guest vocals from Willie Nelson, Rickie Lee Jones and Aaron Neville, who sings on a cover of the Traveling Wilburys’ “End Of The Line”.

Speaking to Rolling Stone, guitarist and producer Shane Theriot revealed that as Rebennack’s health declined, he was forced to finish recording the album at home, “Rick Rubin/Johnny Cash style… We took on a similar approach out of necessity.”

“Towards the beginning, I don’t think Mac realised it would probably be his last record, but towards the end, I think he knew,” said Theriot. “It would break my heart because he would come to my house, and I knew he wasn’t feeling great, and Mac’s work ethic, he was old school; he grew up doing five sets a night. And so he told me on several occasions, he would say, ‘Whatever we gotta do to finish this motherfucker, we gotta finish it.’

“There’s a version of ‘I’m So Lonesome I Could Cry’ that’ll make you cry when you hear Mac sing it,” continued Theriot. “As this record took shape, it wasn’t intentional, but the common thread is that the songs all deal with time and looking back. When you hear Mac sing, it’s somebody that’s lived a really full life. He sounds great, but he sounds exposed.”