David Bowie in the ’80s: “Stardom wasn’t his end goal” 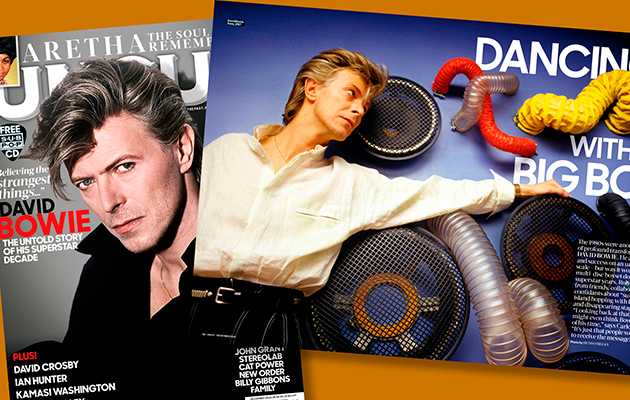 As the perfect companion, the current issue of Uncut – in shops now or available to order online here – includes an extensive 11-page feature about David Bowie’s 1980s, featuring interviews with many of his bandmates and collaborators of the period.

“Let’s Dance was way bigger than he expected it to be,” says guitarist Carlos Alomar. “And there’s this sort of success remorse that goes on when you are accustomed to being eclectic and cool and underground. But Let’s Dance is still a cool record. It’s just big. It’s a big cool record… But I don’t think David looked at stardom as  an end goal. The journey itself was the thing that interested him.”

“I’ve never thought of him as a pop star, even though we had three commercially successful  hit songs on the radio,” offers Carmine Rojas, who played bass  on Let’s Dance and the Serious Moonlight Tour. “Yes,  he was an international star. But I’m not sure that he craved it. He was actually a true artist trying to formulate his ideas.”

The feature explores the motivations behind some of Bowie’s most populist moves – Live Aid, Labyrinth, “Dancing In The Street” – as well as his more leftfield gambits and attempts to subvert his fame (Jazzin’ For Blue Jean, the Glass Spider tour, Tin Machine).

Kevin Armstrong, another Bowie bandmember, says that by the ’80s, “he was probably craving some stability… If you’re David Bowie and you’ve got that creative fire, you can take a few left turns and try out things. Not everything he did was amazing, but if you look at it as a totality, he took risks all the time.”

“Looking back at that ’80s period, you might even think Bowie was ahead of his time,” suggests Alomar. “It’s just that people weren’t ready to receive the message.”

Read much more about David Bowie’s 1980s in the current issue of Uncut, on sale now.