An intro to our upgraded special on the Boss 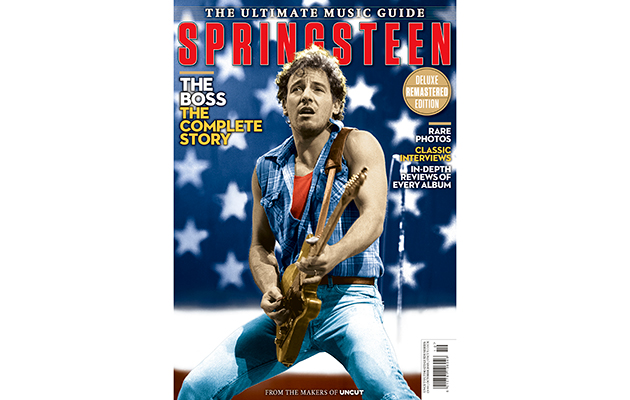 As you’ll presumably have guessed by now, it’s dedicated to Bruce Springsteen and inside this fully upgraded and updated edition you’ll discover the entire story of The Boss, told through amazing interviews from Uncut as well as the NME and Melody Maker archives.

We bring the story up to date with Tom Morrello‘s account of life on the road with Springsteen on the High Hopes tour. And of course, the Ultimate Music Guide also includes in-depth reviews of every single album.

If you can’t make it to the shops on Thursday, then fret not: you can order a copy by clicking here.

It will also be available digitally from Thursday in our digital store – which you can find by clicking here.

September 1978. Bruce Springsteen has just finished playing a show at the Palladium in New York City; a show that has stretched on for nearly four astonishing hours, and which the reporter from NME has been moved to call “the greatest rock’n’roll show that I will ever experience”. It is very late, and even the most demanding of fans would probably cut Springsteen some slack. As dawn approaches, though, he remains energised and attentive, convening with the hundreds of awe-struck followers waiting to pay homage and collect autographs.

“My music gave me everything… I was nobody, I had nothing,” he explains to the writer. “I will never put anyone in the position of being humiliated.” The fans, he says, give him “a real heavy feeling of responsibility… I don’t wanna let the people that have supported me down. And it ain’t good enough just getting by, I wanna take it all the way, every night.”

Thirty-seven action-packed years down the line, Bruce Springsteen’s modus operandi remains miraculously unchanged. As his career rolls into its fifth decade, Springsteen’s commitment, conscientiousness and exuberant love for his fans, his country and the redemptive possibilities of rock’n’roll stand as an example to all other performers. “Bruce has never talked about stopping,” his henchman Steve Van Zandt told Uncut a few years ago. “It’s unimaginable.”

Here, then, is a very special and, we hope, comprehensive guide to a true rock titan. In these pages, you’ll find revelatory Springsteen interviews from every stage of his career. In 1974, laying waste to the dancehalls of Texas, his distrust of stardom is so great he hopes someone will shoot him if he ever plays Madison Square Garden. In 2002, he is at home in New Jersey, reiterating the core message that has sustained him for so long: “I think you have to make a point of behaving like a human being.” In between, there are adventures in France, raids on Graceland, paranoid episodes involving socks, and much more.

There are also deep, forensic reviews of every Springsteen album, from Greetings From Asbury Park, NJ to High Hopes, shining new light on a musical catalogue that still, with each new chapter, has the capacity to startle and inspire.