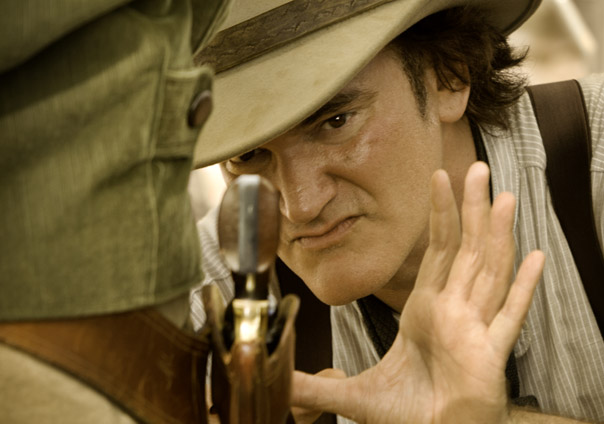 Seeing Quentin Tarantino’s Once Upon A Time In… Hollywood the other night reminded me to dust down this interview I did with the director many moons ago. It first ran in Melody Maker -I’m guessing it was done around the time of Pulp Fiction, so 1994 – and then again in the first issue of Uncut.

Anyway, here you go: Quentin Tarantino on his 10 favourite records.

Bob Dylan
Blood On The Tracks
“This is my favourite album ever. I spent the end of my teenage years and my early twenties listening to old music – rockabilly music, stuff like that. Then I discovered folk music when I was 25, and that led me to Dylan. He totally blew me away with this. It’s like the great album from the second period, y’know? He did that first run of albums in the Sixties, then he started doing his less troublesome albums – and out of that comes Blood On The Tracks. It’s his masterpiece.

Bob Dylan
“Tangled Up In Blue”
“OK, maybe I’m cheating here. I know this is off Blood On The Tracks, but it’s my all-time favourite song. It’s one of those songs where the lyrics are ambiguous you can actually write the song yourself. That’s a lot of fun – it’s like Dylan fooling around with the listener, playing on the way he or she interprets the lyrics. “It’s very hard to take individual songs off Blood On the Tracks, because itworks so well as an entire album. I used to think ‘If You See Her, Say Hello’ was a more powerful song than ‘Tangled Up In Blue’ but, over the years I’ve kinda realized ‘Tangled…’ has the edge, just for the fun you can have with it.’

Freda Payne
“Band Of Gold”
“I’m a gigantic music fan. I love fifties rock‘n’roll, Chess, Sun, Motown. All the Merseybeat bands, Sixties girl groups, folk. This is just so cool: it’s a combination of the way it’s produced, the cool pop/R&B sound, and Freda’s voice. Its kinda kitschy in a way – y’know, it’s got a really up-tempo tune – and, the first few times I heard it, I was, like, totally into the coolness of the song. It was only on the third or fourth listen I realised the lyrics were so fucking heartbreaking.”

Elvis Presley
The Sun Sessions
“This has been a hugely important album to me. I was always a big rockability fan and a big Elvis fan, and to me this album is the purest expression of Elvis there was. Sure, there are better individual songs – but no one collection ever touched the album. When I was young, I used to think Elvis was the voice of truth. I don’t know what that means, but his voice… shit man, it sounded so fucking pure. If you grew up loving Elvis, this is it. Forget the Vegas period: if you really love Elvis, you’re ashamed of that man in Vegas. You feel like he let you down. The hillbilly cat never let you down.”

Phil Ochs
“I Ain’t Marching Anymore”
“OK, from now on these aren’t in any order. It’s the same with movies: I have my three favourite – Taxi Driver, Blow Out and Rio Bravo – and after that it depends on my mood. This is one of my favourite protest/folk albums. While Dylan was a poet Ochs was a musical journalist: He was a chronicler of his time, filled with humour and compassion. He’d write songs which would seem very black and white, and then , in the last verse, he’d say something which, like, completely shattered you. A song I love very much on this album is ‘Here’s To The State of Mississippi’ – Basically, it’s everything the movie Mississippi Burning should have been.”

Phil Ochs
“The Highwayman”
“I’m cheating again. This is an Alfred Noyes poem, which Ochs arranged for music. The vocal has made me burst into tears more times than I care to remember.”

Elmer Bernstein
The Great Escape
“I used to have a huge collection of film soundtracks. I don’t get enthusiastic about them any more, though, because now most soundtracks are just a collection of rock songs, half of which don’t even appear in the movie. This is a real classic. It has a great min theme which brings the movie right into your head. All the tracks hold up – it’s so damn effective. It took me ages to get hold of a copy, and, Jeez, I almost wept when I finally did.”

Bernard Herrmann
Sisters
“This is from a Brian De Palma movie. It’s a pretty scary film, and the soundtrack… ok if you want to freak yourself out, turn out all the lights and sit in the middle of the room and listen to this. You won’t last a minute. When I’m first thinking about a movie I’ll start looking for songs that reflect the personality of the movie, I’ll start looking for songs which can reflect the personality of the movie. The record I think most about is the one which plays during the opening credits, because that’s the one which sets the tone of the movie. Like in Reservoir Dogs, when you see the guys all walking out of the diner, and that bass line from ‘Little Green Bag’ kicks in – you just know there’s gonna be trouble.”

Jerry Goldsmith
Under Fire
“‘The Main Theme’ is one of the greatest pieces of music written for a movie. It’s so haunting, so beautiful, – full of pan flutes and stuff. It’s shattering y’know – like a Morricone theme. Oddly enough, ‘The Main Theme’ works really well, but they never play it over the opening credits. They play it over the middle and during the closing credits, which is very strange.”

Jack Nitzsche
Revenge
“Out of all the soundtracks, this is the best. It’s from a Tony Scott movie – he directed True Romance – and it’s a very lush, elegant score. You don’t need to know the film to enjoy the soundtrack: It works in its own right.”