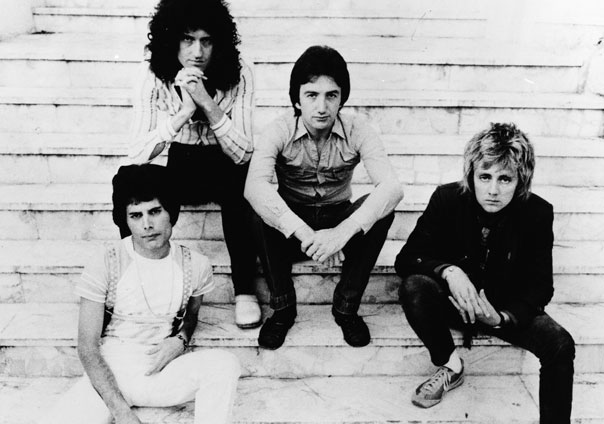 Crucial to the evolution of that legend and Queen’s unique sound – built around a studio confection of monumental slabs of multi-tracked guitars and huge, operatic choruses of layered vocals – was producer Roy Thomas Baker. He’d cut his teeth working with hard-rock acts such as Nazareth and Hawkwind and, despite Queen’s propensity for sonic operatics, was determined the band shouldn’t use synthesisers, relying instead on May’s guitar to provide whatever special effects were required.

It would take Queen three whole years to complete their 1973 debut album, most of which time was spent experimenting in London’s Trident studios, the rest touring the provinces. Press reaction to the early shows was mixed, partly because Queen resisted neat categorisation. Due to Mercury’s stage garb (flared satin pants, tight leotards, diamanté codpieces, ballet pumps, mascara, nail lacquer) they found themselves lumped in with the glam movement. May’s baroque signature riffs earned comparison with Deep Purple and Uriah Heep. The portentous subject matter of their early songs (“My Fairy King”, “Seven Seas Of Rhye”, “Ogre Battle”) saw them likened to prog rockers. In one of their earliest critiques, a Melody Maker writer decided: “Queen are either the future of rock’n’roll or a bunch of raving pooftahs trying to jump on the Bowie bandwagon while doing a poor piss-take of Black Sabbath.”

“We quite like to confuse people,” said Mercury in one of his first interviews. “We’re not really like anyone else. If anything, we have more in common with Liza Minnelli than Led Zeppelin. We’re more in the showbiz tradition than the rock’n’roll tradition.” The truth of this statement was soon proved when Zandra Rhodes was hired to design stage costumes for the band. But despite including live favourites such as “Liar” and “Keep Yourself Alive”, the debut album got little airplay and sales were poor. It took a slice of luck in early 1974 to turn the tide when a promo film of David Bowie’s “Rebel Rebel”, due to be shown on Top Of The Pops, became unavailable at the last moment. Queen were swiftly recruited to fill the vacant slot, and their performance of “The Seven Seas Of Rhye” changed their profile overnight. The single made the UK Top 10 and helped to catapult the album Queen II to No 5.

Yet, as Mercury would later concede, it wasn’t until their third album, Sheer Heart Attack, released at the end of 1974, that Queen found their feet, providing international recognition and their debut UK Top Five single – “Killer Queen”.

“We’ve found our identity now,” he said. “And we have the feeling we can outdo anyone. We’ve always been striving to be the biggest and the best. Now we’re in touching distance of that.”