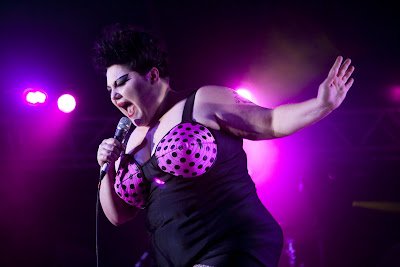 Fresh off a flight from Berlin, !!! wind up proceedings on the Sunrise Stage with an wild, sweaty set under canvas that sees this New York dance troupe playing to their strengths. Received wisdom has it that this is a band firmly in the NYC disco/post-punk tradition, but really there’s as much Sandinista-era Clash and Happy Mondays to these tight basslines, scratchy guitar dissonance and loping baggy grooves.

Certainly, frontman Nic Offer is as much a Bez as a James Murphy, an endearing goof who exists as much to keep the crowd writhing as to dispense anything meaningful on the microphone. And while this means that !!! may not have the studied cool of hometown buddies The Rapture or LCD Soundsystem, I’m pretty sure neither of those bands have quite the goofy good humour to inspire an impromptu conga line.

Then finally, it’s back down to the Uncut Stage for a climactic set from the Gossip. They keep us waiting, an interminable soundcheck delaying onstage time by a good 20 minutes – although that very few shift to check out a very audible Nick Cave on the adjacent Obelisk Stage says a lot about the Ditto appeal. And then, she’s here, scarily glamorous in styled up black hair and pink polka-dot dress: “Do you have an attitude, Latitude?”

The set mixes up material like “2012” and “Heavy Cross” from the band’s synthier, disco-tinged new Rick Rubin-produced album Music For Men with older, rawer numbers like “Listen Up!”, but really, this show will be memorable for Ditto’s game attempts to close the gap between band and audience. Hauling kids over the barrier, commanding security to “Let them dance!”, before long the photo pit is a sea of bodies, bodies that one by one bound up on stage (although Ditto can’t get anyone to have a go on the microphone – still, given the competition, can you blame them?).

They wind up, of course, with a rabid take on “Standing In The Way Of Control” and an impromptu a capella burst of Queen’s “We Are The Champions” in honour of those booted off the stage. Justly deserved, but it’s hard not to consider Beth’s declaration that this will be their “last UK show in a while”. Certainly, their absence will leave a distinctly Ditto-shaped hole – and it’s hard to think of who’s out there who can fill it.