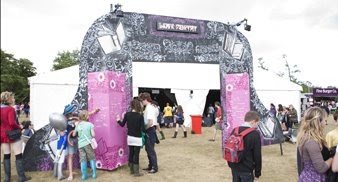 He took awkwardly to the small Poetry Tent stage at about half 12 at night, and announced he was going to take the informal setting as a chance to debut a number of new songs.

“These songs haven’t really been performed before, and they might not ever be again,” he said in his nasal drawl.

We really hope they are, though – perhaps, Lewis’ funniest set of songs yet, the songs he debuted upped the tragi-comic stakes of his earlier material to a near ludicrous level.

One of the most impressive tracks was a rapid-fire gangster rap parody about murdering mosquitos in his cabin in Maine, titled (we’re guessing) ‘Mosquito Mass Murderer’.

After a number of very funny and morbid songs, Lewis decided to change tack, saying that people often think all his music is just about death and self-loathing: “So I’m going to sing about something different – this song’s about suicide.”

The resulting macabre track was a hilarious and gruesome account of his (fictional, of course) attempts to kill himself, which included swallowing rat poison (then trying to get his cheque cancelled when he believes the poison hasn’t worked), jumping off a bridge (before being contaminated with toxic waste from a passing river barge), and putting a chopstick to your chest and running towards a wall (how else can you off yourself when you’re eating chinese food?).

A twisted renaissance man and, undoubtedly, some kind of genius, then.