OK, I know it's early days but I might have just seen one of the performances of the festival.

OK, I know it’s early days but I might have just seen one of the performances of the festival. 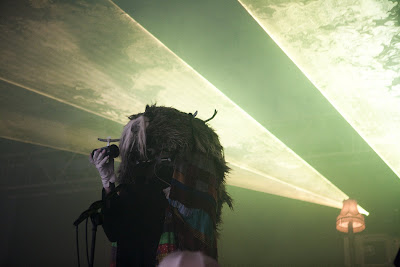 Fever Ray is the solo project of Karin Dreijer Andersson, one half of Swedish brother-sister duo The Knife. Her self-titled debut album, released earlier this year, won its fair share of acclaim, taking The Knife’s sound – loosely, eerie, gothic techno-pop – and slowing it down, adding in strange ethnic and Far Eastern influences, cold synths and beats mixing with chimes, bead shakers and tribal drums.

Seeing Fever Ray live in the mid-afternoon Uncut Arena, though, makes you feel like the album is merely half the picture. Lasers cut through the half-light, illuminating the huge clouds of smoke that billow off the stage, and Karin – wearing an outfit that makes her look halfway between The Emperor from Star Wars and a totem pole – walks on leading a strange bunch of backing musicians: a clown in a cassock, a sort of Inuit tribeswomen, and two odd, faceless bird people that look like they wait in the restaurant of your nightmares.

Rather than distracting from the music, though, this bizarre tableau only focuses your attention on the eerie beauty of the music. Karin could probably captivate the crowd with her clear, flawless vocal alone, but many songs feature her voice distorted, or pitched down to a crunchy electronic baritone. Yet there’s no mistaking that the likes of “Triangle Walks” and “When I Grow Up” are essentially pop songs – and as teenagers dance up front and girls clamber on to their boyfriends’ shoulders, it’s immensely heartening to see such wilfully challenging music really make a connection with something as disparate and flightly as a festival audience.

Anyway. Enough chatter. Next port of call is Regina Spektor, so I shall bid you adieu.