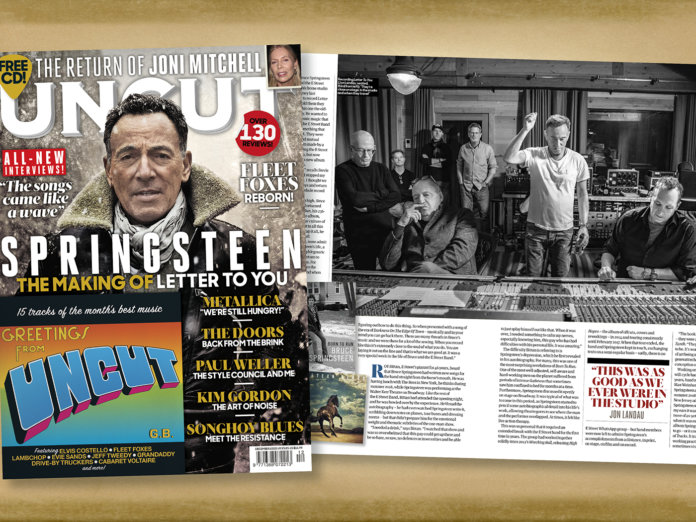 The latest issue of Uncut – in UK shops now and available to order online by clicking here – takes you inside the making of Bruce Springsteen’s barnstorming new album, Letter To You. In our exclusive feature, Peter Watts speaks to every member of the E Street Band about life inside “a benevolent monarchy”, the rigorous discipline behind Letter To You’s “Beatles schedule” and honouring the departed. Here’s a taster of what to expect…

When Bruce Springsteen gathered the E Street Band at his home studio in New Jersey last November to record Letter To You, he told them they were doing this one the old-fashioned way. He wanted to bottle the alchemic magic that happens when the E Street Band take the stage, something that hadn’t been captured on record since Born In The USA. They were going to take all that experience, intuition, respect and mutual musical understanding and distil it into a studio album made by a band playing live in the same room. This was something the E Street Band had been eager to do since they reformed in 1999, but now Springsteen felt the time was right – partly because his new album was all about what it means to be in a band for 50 years.

“Bruce got in touch and told us to get ready to record,” recalls Stevie Van Zandt, who first joined the E Street Band in 1975. “I stopped my own tour on November 6 and we met up right after that. I thought we would be in the studio for a month, break for the holidays and return to the studio. I didn’t know we were going to make the whole record in five fucking days.”

For the members of the E Street Band, anticipation ran high. Since The River Tour ended in February 2017, Springsteen had returned increasingly to his past. There was his memoir Born To Run, his 236-date run on Broadway – even Western Stars, his 2019 solo album, came from a place of introspection, exploring the popular culture of his youth through lushly orchestrated cowboy sagas. But in all this rumination there was no role for his trusted cohorts. To cap it all, he hadn’t written any new material since 2012’s Wrecking Ball.

If the E Streeters thought they were running out of road, none admit it. By now they are comfortable with their role in Springsteen’s life, a regular presence but not welded to him. Perhaps it’s that phlegmatic self-determination that makes Springsteen so willing to return to the band – a mutual bond that doesn’t edge into neediness. For Springsteen’s manager, Jon Landau, it’s part of what makes the relationship work. “They’re close on stage, in the studio and when they travel, and they leave each other plenty of space when we’re not working,” he says.

So even when Springsteen revealed during an interview with Martin Scorsese in May 2019 that he had written some new E Street songs, the band remained sanguine. “Sure that got me excited, but just because he says he’s written some rock songs, I’m not going to bug him,” says Nils Lofgren. “When he’s ready to reach out, he will.”

As the band discovered, the songs Springsteen wrote for Letter To You followed the wistful pattern established in recent years. But he had found a way to combine personal nostalgia with the scale, emotion and universality that comes with the E Street Band. As with much of his recent output, it’s a step forward inspired by the past. “It’s the fourth part of an autobiographical summation of his life,” confirms Van Zandt.

Amid new songs that explore Springsteen’s life as a musician from the perspective of a man in his seventies, he sprinkled three older tracks that tap directly into the deep currents of his past. These are songs he wrote as a younger man, but now interpreted by men in their sixties and seventies. “Janey Needs A Shooter” is an organ-fuelled saga the E Street had tackled several times in the ’70s, but never nailed. Now it was time to try again.

“When he presented ‘Janey’, in my head it was 1977 so I played like it was 1977 – but better,” says Max Weinberg, who joined the band in 1974. “For Letter To You we had largely the same individuals who had spent hundreds of hours in the ’70s figuring out how to do this thing. So when presented with a song of the era of Darkness On The Edge Of Town – musically and in your mind you can go back there. There are many threads in Bruce’s music and we were there for a lot of the sewing. When you record like this it’s extremely close to the soul of what you do. You are laying it out on the line and that is what we are good at. It was a very special week in the life of Bruce and the E Street Band.”

You can read much more about Bruce Springsteen, the E Street Band and the making of Letter To You in the December 2020 issue of Uncut – in shops now, or available from our online shop.