Drive-By Truckers: “Now was not the time to retreat” 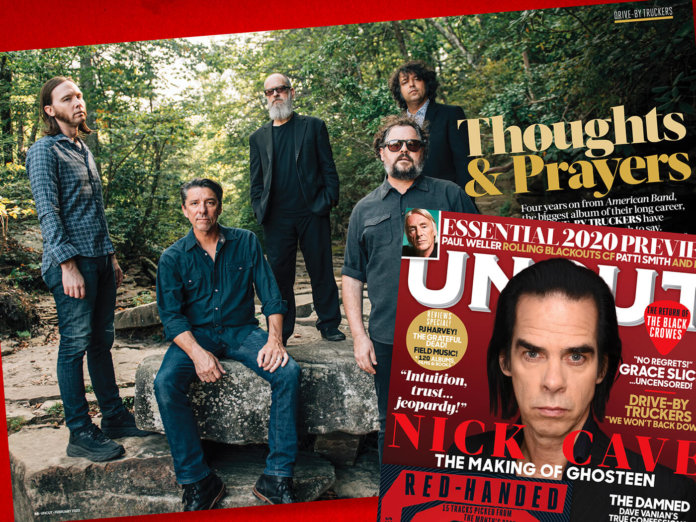 The latest issue of Uncut – in shops now and available to buy online by clicking here – features an interview with Drive-By Truckers, who have returned after four years with a fiery new album, The Unraveling.

Talking to Uncut’s Stephen Deusner, the band’s co-founder Patterson Hood reveals how, in the intervening period, he was writing plenty of solo material but having trouble coming up with songs that would suit the Truckers’ rollicking ethos. “The record I wanted to make with them needed to be big and loud,” he says. “The Truckers know how to not be big and loud, but that’s not as much fun as when we’re big and loud.”

Hood’s breakthrough came in an unlikely place: the outskirts of Gillette, Wyoming, population 30,000. The Truckers had stopped there between gigs, and as the band hoofed it from their hotel to a nearby Mexican restaurant – “three stars on Yelp, everything slathered in queso, really bad for you and delicious” – Hood noticed the preponderance of big box stores and chain restaurants. He felt he could be anywhere in America, any town. At dinner he jotted down some lines on a napkin, wolfed down his tacos, and ran back to the hotel to write “21st Century USA”. It’s a quiet, loping exurban blues, but the ideas are big and loud. It’s less about all the franchises he mentions and more about how that sameness affects the people who live there. “I could hear it all in my head, and in the moment I was just elated because it felt like I had broken through.”

Part of what made songwriting so difficult for Hood – and part of what made “21st Century USA” such a eureka moment – was the state of the country in the late 2010s. “How do you write about this shit that’s going on right now in a way that you’d want to listen to as a record?” he says. “One option is not to write about it at all, but considering the stand we took on American Band and the fact that we toured behind it and called ourselves the Dance Band Of The Resistance, it seemed cowardly not to follow through. It seemed like now was not the time to retreat.”

What he wanted to avoid was a very different kind of echo chamber: one that only exposes you to people who already agree with you, who reinforce opinions no matter how misguided or misbegotten they might be. “To me,” says Hood, “one of the problems we’re having as a people is this lack of empathy to other people’s points of view. So the way we’ve written about politics is to write about personal things, whether it’s one of us or somebody we know or somebody we just made up. These two most recent records might on the surface be a little more direct than previous records, but it’s still what we’ve done all along.”

You can read much more from Drive-By Truckers in the latest issue of Uncut, out now with Nick Cave on the cover.