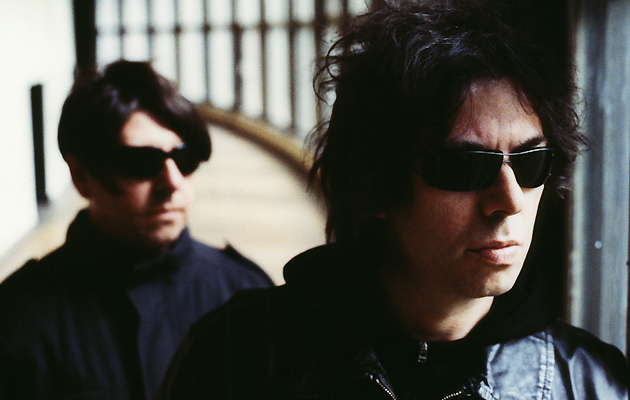 Evergreen
London, 1997
A stately and triumphant return for the remaining trio.

Pattinson: I was never keen about going back, but to tell you the truth it was fantastic. I’d been told that Mac was burnt out and needed fresh ideas, and wanted to work with us. Because we had such a long break it was like a new lease of life. “Nothing Lasts Forever” was pure, pure Bunnymen, and it sounded fresh.

McCulloch: I’d had that song since 1990 in various forms. The others were very negative – Will said, “It’s a bit pretty”, and I thought, ‘You fucking idiot, that’s like calling “The Killing Moon” a bit beautiful.’ To me, it’s the most important song I’ve ever written because it takes me back to being taken seriously, and it’s one of the best songs of all time. Oasis were in the studio next door doing Be Here Now. Liam came in and listened to “Nothing Lasts Forever”, and he had ideas for tambourine and a backing vocal, and we thought, yeah, we’re having that. He was spot on, it really made that song great. With the lineage of frontmen through the years, having him on it made sense for me.

Pattinson: My mum had MS, and the first day in the studio recording the follow-up [1999’s What Are You Going To Do With Your Life?], I got a call saying my mum had been taken in with a suspected stroke, but it wasn’t – she was given six months to live. So I left and my mum lasted five months. By then they had got another bass player in, and then they got dropped two weeks after the album came out. It was just bad timing all round. There was also a lot of politics going on about writing and royalty credits. People were trying to get control and I couldn’t be arsed with that side of things.

McCulloch: I like Siberia a lot. It’s better than Porcupine and I prefer it to Heaven Up Here too. I remember reading a review and it saying “no other group has managed nine albums in to make their best record ever”. I didn’t agree, but it was the first time I was touching on my depression, I suppose. Singing about it, a line like, “Have I hit rock bottom, tell me how to hit rock bottom”… When I get to sing songs with words like that it will always mean more to me than the pretence in [2001’s] Flowers. I thought the tunes were great, the guitars were brilliant. It sounded like a band with more bollocks to me than on Flowers. On Flowers it was the wrong vehicle we were driving, left-hand drive. We were just spinning round with no direction or knowledge of where to turn off. Whereas on Siberia, it was great, with Huw Jones producing, like the first few records. I can only judge things from my point of view, and I’m the biggest fan of this band, and I see it from the viewpoint of someone who sings the words. As much as you can be the bass player, drummer or guitarist… just the song titles alone mean so much. “The Killing Moon” – we didn’t think of that title together. That is the greatest title of anything some people have ever heard.

Sergeant: I think on Siberia there were something like 90 different guitar parts – but you can’t really tell, it’s all doubled guitars.

Meteorites
429, 2014
The Youth-produced, energetic new one, with McCulloch seemingly firmly in charge.

Sergeant: I’ve done some good stuff on this new one, but I don’t feel much of a, you know… I didn’t have a lot to do with the conception. I haven’t got that close to it.

McCulloch: There was only a bass guitar lying around my gaff and I started writing on that. Four songs on the album were finished in a day, and I’ve never done that. I’ve played bass on records before, but it’s never really initiated a song for me until now. It sounds so different. I wasn’t thinking chordally or the way I was used to writing songs, but by doing this it reminded me of Talking Heads. It reminded me of our early Bunnymen stuff actually, that kind of pulse. Sergeant suggested Youth to produce – we all really liked Killing Joke and they were one of three bands I thought about as competition to us, I thought they had something special.

Sergeant: I don’t know what Youth was like as a producer! I only went up to his studio for two days, did stuff on five tracks. I did the rest of the guitars in my own studio, just me and the engineer, then they all went back to Youth to mix.

McCulloch: I’d say “The Killing Moon” is the greatest song we’ve ever written, and I’d say the most important one up until this album is “Nothing Lasts Forever”. Now I’d say “Meteorites” at this moment in time is equally as important, as well as “New Horizons” and “Market Town”.