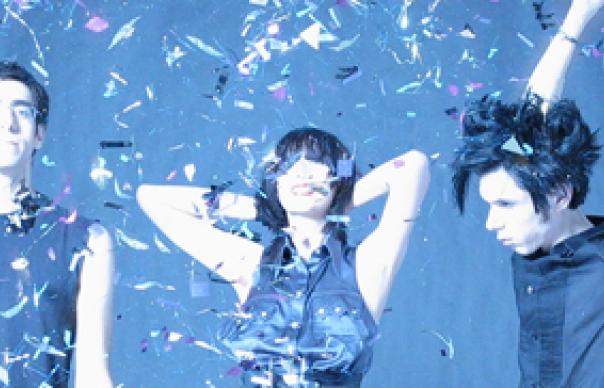 Ever since the Yeah Yeah Yeahs shot out of New York’s art-rock scene circa 2001 in a commotion of fishnet tights, smeared lipstick, and impossibly spiky hair, the bass-shunning trio have, unlike many of their peers, remained at the vanguard of cool. Their albums (which are too infrequent – it’s been three years since the brilliant, if under-appreciated, Show Your Bones) never so much drop as they detonate, and It’s Blitz! is no exception, despite the fact that this is a record unlike any we’ve heard from the band before. From the ricocheting Giorgio Moroder-esque glitterball beat that drives electro-pop opener “Zero,” to the spectral hush of closer “Little Shadow,” It’s Blitz! bristles and sighs with the confidence of a group that has found a way to evolve into something glossy and commercially aerodynamic without entirely losing sight of its grimy garage-rock past.

The most dramatic third-album shift is that Nick Zinner’s slashing, evil-spider guitar, which has long provided the dirty, driving force behind most Yeah Yeah Yeahs songs, has been sublimated by a whirr of synthesisers. In theory, this sounds worrying, but in practice it mostly works a treat. Although the album lacks the slinky, spiked menace of much of Show Your Bones, what emerges in its place is more full-bodied and atmospheric than anything they’ve achieved before. Unmoored from those defining six-string sonic parameters, they are de-fanged, perhaps, but still rippling with life.

For better or for worse, this is a record with a split personality. Half of the tracks are slickly glamorous slices of dancefloor dynamite – the best one, “Heads Will Roll”, finds Karen O sounding more Kylie than Poly Styrene as she unleashes its timely partying-while-the-world-burns chorus: “Off off off with your head/ Dance dance dance till you’re dead” – while the other half are delicate, introspective ballads. What unifies them is a warm romanticism that runs throughout, edging out Karen’s blatant eroticism of yore – even though there are more come-downs than come-ons, every song seems to glow from within.

“Hysteric” is the closest the Yeah Yeah Yeahs have come to capturing the raw emotional punch of 2004 hit “Maps”: Its refrain – “you suddenly complete me” – could have fallen into Jerry Maguire cliché in less deft hands, but instead pithily summarises the blunt shock of finding oneself unexpectedly in love. On “Dragon Queen” the band sounds almost unrecognisable, veering off into irrepressible hiccupping polyrhythms (courtesy of drummer Brian Chase) that recall the Tom Tom Club. “Soft Shock”, meanwhile, features a pulsing synth à la Berlin’s “Metro”, and on “Dull Life” – the song that most obviously recalls the ballsy insouciance of their sensational 2002 debut EP – Zinner’s Fender roars into frame again, and it’s a joy to hear it. So much so, in fact, that you can’t help but wish they’d found a little more space for guitars elsewhere on the album.

It’s Blitz! does have a weak link or two: “Shame And Fortune” falls squarely between being underwhelming and irritating, and “Skeletons” is an exercise in over-done synths (they really shouldn’t sound like bagpipes, but they do) that goes precisely nowhere. Yet even within such less successful tracks, you can’t fault them for inertia: every nook and cranny is packed with effects and ideas. This spirit of experimentation, no doubt buoyed by having such able producers as Nick Launay (who worked with the band on the 2007 stop-gap EP, “Is Is”) and TV On The Radio’s formidable Dave Sitek on board, is ultimately what elevates It’s Blitz! above the occasional saggy moment. Despite its obvious debt to the ’80s and its (appreciated) nods to the trio’s own past, it’s their most modern, innovative record yet. The Yeah Yeah Yeahs have once again raised the bar – both for themselves and for the other bands that remain in their shadow.

UNCUT:How did you approach this album differently?

BRIAN: We had no idea what it would sound like when we first started working. We had a really open attitude towards experimentation, and we did a lot of collective improvising, which is something we’ve never done before. From those sessions we extracted certain things we liked, and then the songs grew from there.

What sparked the adoption of keyboards?

Nick brought a keyboard into the writing sessions, and it just worked. Over the years we’ve gotten to know each other so well that we have to keep plotting new ways to push ourselves into unfamiliar territory. Putting a limitation on Nick to move away from guitar and work with synths forced us to be more creative.

What did Dave Sitek’s production bring to the record?

We only spent about three days with him, but they were crucial days. He has a fearless, throw-caution-to-the-wind approach to production. He was there to revolutionise what we were doing in terms of the electronics and the overall aesthetic and sound. There’s a cool dryness to the record; the drums and guitars are more contained, less bombastic. That definitely has to do with him.

Are the brass sounds a TV On The Radio influence?

Totally. We’re going to bring extra musicians on tour to play that stuff live. Karen should bust out the saxophone, though… that would be great.