Xylouris White, Rhyton, and what I did on my holidays…

While the latest issue of Uncut was turning up in the UK last week, I was a long way from “Basement Tapes” frenzy, on holiday in Athens. I saw all the classical sites, accidentally walked into both a Tino Sehgal performance piece and a NATO delegation, and also, true to form, found time to do a little record shopping. 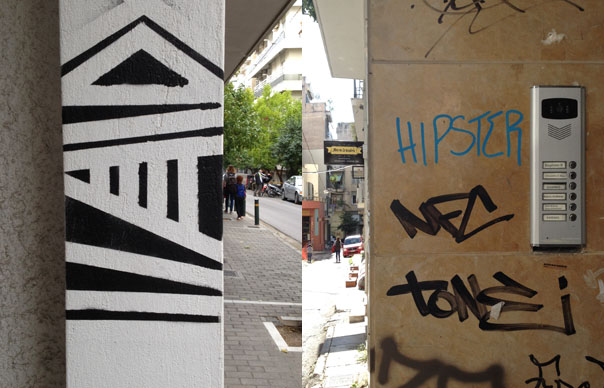 While the latest issue of Uncut was turning up in the UK last week, I was a long way from “Basement Tapes” frenzy, on holiday in Athens. I saw all the classical sites, accidentally walked into both a Tino Sehgal performance piece and a NATO delegation, and also, true to form, found time to do a little record shopping.

My trip proved to be well-timed, as these past few weeks I’ve been playing a couple of new albums, by Xylouris White and Rhyton, that are rooted to greater and lesser degrees in the music and culture of Greece. Xylouris White’s “Goats”, which came out last month, is a collaboration between Jim White, the Dirty Three’s dextrous Australian drummer, and a Cretan lute player called George Xylouris. It begins with a track called “Pulling The Bricks”, and the kind of rolling explosions that White has long deployed so effectively: a big man behind a small kit who draws on the tumble of free jazz in an unusually subtle way, so that his rhythm patterns are consistently inventive without ever detracting attention from whoever he’s playing with (in the past: Cat Power, Will Oldham, PJ Harvey, Bill Callahan).

Soon enough, though, it’s Xylouris’ lute that takes the lead, a complex and prickly sound embedded in the folk music of his home, but with an inquisitive spirit that moves into wider and more esoteric circles. Xylouris is from a village called Anogeia, poetically situated just down the hill from the Cave Of Zeus, and is part of a family of musicians who, it transpires, have a critical role in the Greek music of the past 50 years.

In a shopping arcade just round the corner from Athens’ central square, Syntagma, I found the Xylouris record shop, mainly dedicated to the memory of George’s uncle, Nikos. Most things I’ve read on the internet call Nikos Xylouris, who died in 1980, the Archangel Of Crete, and mention that he played a significant role in bringing down the Greek military government in the late ‘60s – though I can’t work out exactly what that role was (Wikipedia mentions it, predictably, with one of those “Citation Needed” glosses). If anyone can enlighten me, I’d be really interested to hear from you.

Anyhow, Nikos Xylouris’ widow was working in the shop when I turned up and, after I mentioned the Xylouris White album, she guided me to an album called “Antipodes 2” that George made fronting his Xylouris Ensemble, released in 2002. It collects recordings made in Australia in the 1990s with a bunch of local, predominantly Celtic musicians, though the music is gorgeous and solemn – more so than the slightly friskier “Goats” – and closer, to at least my neophyte ears, to tradition.

In the sleevenotes, even back then, there’s an acknowledgement for the Dirty Three; one of the ensemble is Xylouris’ wife, Shelagh Hannan, an old friend of White. When I first heard the Xylouris White album, it struck me as a brilliant extension of the Dirty Three’s romantic aesthetic, with Xylouris taking the dramatic starring role normally occupied by Warren Ellis. Now, though, I wonder whether, to some degree, Xylouris and his family actually influenced The Dirty Three, especially when Ellis plays bouzouki rather than violin. White and Xylouris have only been playing together since an ATP hook-up in 2009, when a Nick Cave-curated festival lineup placed them both alongside Xylouris’ father, Psarantonis. This music, though, is obviously imbued with a history that’s both ancient and modern, and I’d love to learn more, if anyone has recommendations for me.

“Goats”, incidentally, is produced by Guy Picciotto, who I wish would make some music of his own again: maybe the CD release of Fugazi’s first demo tape might be a sign of re-engagement (though I’d happily settle for a Rites Of Spring reunion, too)? There’s a great interview with Xylouris, White, Picciotto and the film-maker Jem Cohen (who directed the clip below) at The New Yorker. Strongly recommended.

As is this new album by New York’s Rhyton; a rhyton being an elaborate Greek drinking vessel, as I discovered in the National Archaeological Museum the other day.”Kykeon” begins with 80 seconds of needling guitar noise, but soon coalesces into a much more satisfying, Aegean-inflected jam session. Bouzouki/saz/guitar player Dave Shuford has form here: besides his work with the No-Neck Blues Band (semi-feral improv) and fronting D Charles Speer & The Helix (rowdy bar-room Americana), 2011’s solo set, “Arghiledes”, was ostensibly a study of Greek folk music.

On “Kykeon” (it’s an intoxicating ancient Greek drink, apparently), Shuford and his bandmates, Jimy SeiTang and Rob Smith, combine that knowledge with freewheeling homeland psychedelia. “Gneiss” and “Pannychis” are notable highs, imbued with a wiry funk that connoisseurs of Anatolian psych will find recognisably potent. Again, see what you think…