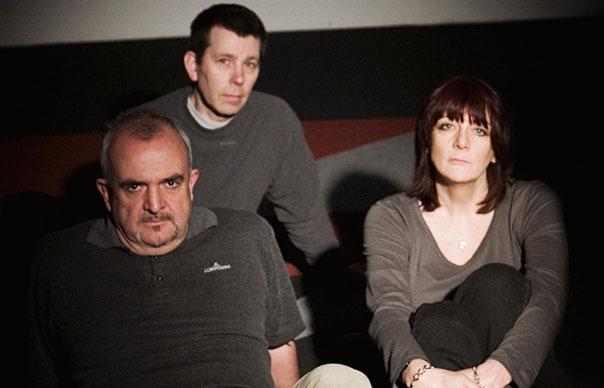 On many levels, there is a heavy note of farewell hulking around this recording. Most significantly, it’s almost certainly the last notes we’ll ever hear from the 36 year old entity that is/was Throbbing Gristle. The groundwork recordings for their ‘reversioning’ of Nico’s 1970 LP Desertshore took place as a public ‘installation’ at London’s ICA during 2007. Now, though, the contributions of lead vocalist Genesis P-Orridge have been eradicated from the mix, and this outcome has been reworked into a virtual remix project involving the ‘other three’ (Chris Carter, Cosey Fanni Tutti and Peter ‘Sleazy’ Christopherson) and a succession of guest vocalists. There has been a nasty Twitter spat about it between Genesis and Carter/Tutti, and releasing the project under the name X-TG has surely only poured more gasoline on the fire. There’s also the fact that it’s one of the last releases to feature the late TG founder/Coil member Peter ‘Sleazy’ Christopherson, who died in early 2011, effectively removing yet another pillar of the Industrial edifice. And then there’s the song “Abschied” (“Farewell”) itself, second in, a heavy-lidded, lurching slugbeat with Einstürzende Neubauten’s Blixa Bargeld snarling a lullaby calculated to induce nightmares.

TG covering Desertshore – how random is that? Well, it was Sleazy’s predilection for Philippe Garrell’s 1974 film Les Hautes solitude that triggered it – a lengthy, agoraphobic dreamscape in which Nico is successively abandoned, courted, abases herself and screams hysterically, like a fucked-up damsel in some saintly Renaissance painting of vast mythical landscapes, deserted beaches, waterfalls and ice floes (imagine Hipgnosis doing a Temptation Of St Anthony).

But, carved in Chris & Cosey’s razor-sharp electronic textures, this is mostly a pretty libertarian take on Nico/John Cale’s original arrangements, as it needed to be. Desertshore is really only the jumping-off point (Beachy Head?) for an album of ultimately rather bleak electronic songs. The early bars of “Janitor Of Lunacy” provide an expansive opening, with Cosey’s trumpet fanfares, a stately vintage drum machine plod, and the magnificent emergence of Antony Hegarty’s falsetto, which churns the song into something as anthemic as Sigur Rós. Actress and former porn star Sasha Grey makes a reasonable fist of Nico’s blankness on “Afraid”, while Marc Almond’s unmistakable expressiveness has the opposite effect on a lushly treated “The Falconer”, the album’s weakest link. French film director Gaspar Noé delivers “Le Petit Chevalier” like one of those news reports where a witness’s voice has been disguised, while the backing track thunders more like an advancing army of orcs than a knight gallant. Strangely, the one German speaker, Blixa Bargeld, is the least appealing, the bombast that sounds so effective in other contexts coming over heavy handed and self-parodic here.

The strongest performances, in fact, come on the two tracks vocalled by Cosey herself. “All That Is My Own” – the song that contains the album’s evocative title – is plastered into the mix via some digital mask; while she takes “My Only Child” arrestingly straight, in a delicate, entranced reading that recalls Broadcast’s Trish Keenan. Additional coda “Desertshores” is a new, ambient piece that samples various TG associates saying “Meet me on the desertshore…”. It’s a moving end, not least as an unofficial wake for the late Sleazy, and completely attuned to the mourning tone of Nico’s own music. It could also be a send-off for TG itself, except that the absence of P-Orridge revives that bitter taste. But then, on the second CD, comes The Final Report. Provocatively named, since it clearly gestures back towards the Annual Reports of Throbbing Gristle’s late heyday, it’s nevertheless very much in the soundworld of Carter Tutti’s recent work. Tracks like “Um Dum Dom”, with its ticking intro, or “Gordian Knot”’s splurge of granulated vox all contain a latent urgency, and remind you that the ‘industrial’ sound associated with acts like Ministry, Nine Inch Nails et al ended up in a very different place from TG’s fluid, improvisatory approach. “The End” is a faltering hum, a last cranial rumble of adieu from TG’s infernal machinery. Bring on the asset strippers!
Rob Young

Q+A
Chris & Cosey
Why Desertshore?
Chris: The concept was entirely Sleazy’s idea. Nico’s album had always been a huge favourite of his. He proposed a cover version in 2006. We all agreed it was something we could get our teeth into. None of the ICA material is on this final release. The backing tracks we used at the ICA were never meant to be on the final album anyway. They were there as guide tracks for the vocals.

How hard was it to get away from Nico’s distinctive sound?
Cosey: Sleazy’s vision was to re-imagine the songs, and to do that I felt I needed to make them my own yet I wanted to retain that deep sense of emotion, strength yet vulnerability that’s unique to her voice. Her melodies are so hauntingly beautiful that it’s quite difficult to find an entry point.
Chris: We wanted the other vocalists to sing their part however they wanted. The only guidance we gave them was that whatever they sang might end up sounding completely different after we’d finished with it.

Has the Gristle throbbed its last?
Cosey: Throbbing Gristle is no more. When TG 4 became 3, we and Sleazy formed X-TG. The Final Report is a selection of the last recordings we did with Sleazy. A kind of signing-off Report, but I also view it as celebrating our time with him.
INTERVIEW BY ROB YOUNG