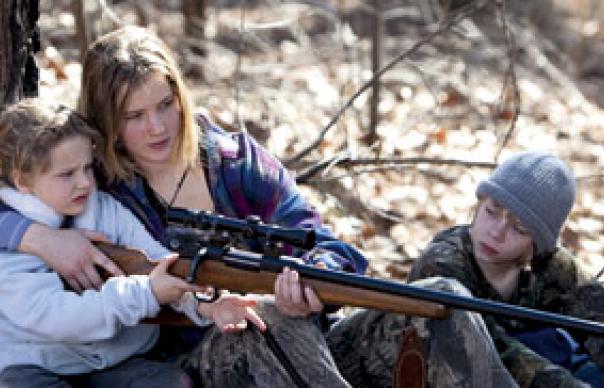 The world described by Winter’s Bone is a place of woe, where when things aren’t bad they’re worse. It’s remote, inhospitable, out there on the very edge of things, impoverished, populated by brooding malcontents, linked by blood, suspicion and ill-feeling and otherwise known as the Ozarks of southern Missouri.

Daniel Woodrell, who wrote the 2006 novel that Debra Granik’s film is based so faithfully on, grew up here and it’s where his best books – among them The Death Of Sweet Mister and Tomato Red – are based. Woodrell knows this world well and the kind of people who live there even better and through his writing we can lay a small claim to also knowing them, although we can’t as wholly understand them as Woodrell does. For the outsider, these Ozarks are an alien tract. It is in many senses a land that time seems to have forgotten, passed over and left to rot. The small ruined communities scattered through this bleak outback are fiercely territorial, secret places almost, bound by ancient ties, one family linked to another in a chain of suffering, violence and a forbidding insularity. Life here is conspicuously hard, the people even harder. They live by unforgiving rules, nothing written down but understood by everyone, no-one here who doesn’t know that harsh things happen to anyone who breaks them.

In bygone times of meagre income, livings were made by the brewing and sale of moonshine whiskey, the hills and hollers littered with illegal stills. Now it’s methamphetamine modern bootleggers are cooking in ramshackle backwoods labs, the bulk of them evidently high on their own supply, which leads in turn to a certain itchy tetchiness and the constant promise of someone or other flying off the proverbial handle with the usually dire consequences that attach themselves to people with guns who are fucked up on drugs, especially when there’s money involved.

Jessup Dolly is one such crank chef, recently busted by the law and looking at serious jail time. When the film opens, he’s gone missing. The local sheriff’s convinced the notoriously irresponsible Jessup’s skipped bail, which is bad news for his family – his 17-year-old daughter Ree (Jennifer Lawrence), her younger siblings and their mother, whose mind has long-since “scattered to the high weeds”, as Woodrell puts it. Jessup’s put up their home as part of his bail bond. If he doesn’t show up the next week for his court hearing, the house and the land it stands on will be forfeit and the family evicted into a world more hostile than the one they already know.

Ree doesn’t believe that Jessup, dog that he is, would have merely run away and left them to potential destitution. Which means, she begins to reckon, that he’s dead, killed she comes to believe by even more aberrant members of the Dolly clan, the really scary ones who frighten even each other, perhaps the bunch over in nearby Hawkfall, where murderous patriarch and meth-lab king Blond Milton holds fearsome sway. Jessup has been seen recently in their creepy company and has perhaps been in criminal cahoots with them, an alliance in the wake of his arrest that’s gone sour. Ree can see how the deeply suspicious Miltons might easily have convinced themselves that Jessup has sold them out to save himself, which of course means curtains for Jessup, according to what Woodrell calls the “remorseless blood-soaked commandments” that govern the lives of this otherwise lawless brood.

If Jessup’s been killed to keep him from talking, Ree will have to prove to the law that he’s dead, which means she’ll have to find his body. There are people in these hollers and townships who might know where her pa is, and she’s related to most of them.

Her kin are everywhere, but no-one is inclined to help her or even talk about what might have occurred to her father. Whenever she tells anyone about the terrible pinch she’s in and why she’s desperate to find Jessup, everyone retreats into an ominous silence.

This includes his brother, Ree’s uncle, the satanic Teardrop (John Hawke), a man feared by men who would otherwise describe themselves as fearless. Teardrop seems at first to be the worst of his kind, everything bad about him made even more dreadful by his addiction to the crank he’s been cooking up for years, most of which by the dank deranged look of him he’s ended up snorting himself. He has the look of someone who’s spent time in hell and liked it there. As Ree’s search for Jessup and the truth of what happened to him brings her dangerously close to Blond Milton and his thuggish tribe, Teardrop, however, becomes her one ally, no-one but Teardrop with so little thought for his own life that he might easily give it up if it comes to a reckoning with Blond and his
gap-toothed minions.

Granik has directed only one other film (2004’s Down To The Bone), but she brings an astonishing authority to Winter’s Bone, which the more you watch it seems a masterpiece of storytelling, lean and uncluttered, subtle and urgent. It’s a film full of mounting tensions and an atmosphere of dread and incipient terror that will make you uncomfortably familiar with the edge of your seat, which is where you’ll mostly watch it from.

Winter’s Bone looks terrific, too. Michael McDonough’s cameras capture the cold hard beauty of the Ozark locations with an almost documentary sense of place. At times we could be watching an ethnographic portrait of a remote rural society. But the film works, too, as an intense and gripping thriller and is further distinguished by its performances, particularly by the two leads. Newcomer Lawrence is breathtakingly good as Ree and an Oscar nomination surely will be forthcoming. Hawkes as Teardrop, meanwhile, is a searing presence, malign, heroic and unforgettable in the best American film since The Hurt Locker.
Allan Jones