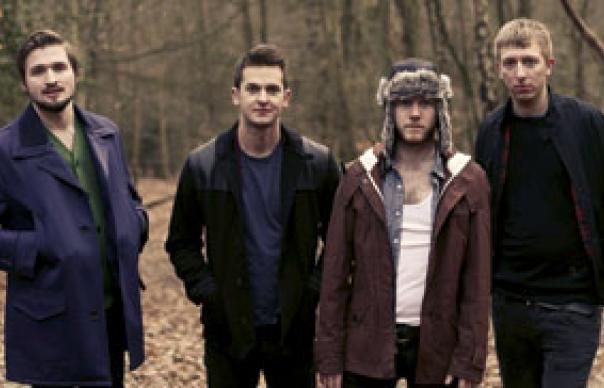 Wild Beasts have always felt like a band caught between ages.

Sonically speaking, their two previous albums, 2008’s Limbo Panto and 2009’s Two Dancers, seemed the product of an era that gave us literate English guitar pop like The Associates, Orange Juice and The Smiths. But their songs themselves were something odder, trickier to define; frequently modern in theme, but related in an archaic tongue more befitting of young men of Edwardian England than anything so contemporary. “Frock spill like alcopop around girls’ knees/Trousers and blouses make excellent sheets, down dimly lit streets” went one of vocalist Hayden Thorpe’s more notable lyrics, suggesting that even if the youth were engaged in copulation on the high streets of our nation, they did at least retain an excellent command of the English language.

Their frequently fine new album, Smother, serves to confuse Wild Beasts’ place in the fabric of time even further. Commencing with the insistent throb of a synth, opener “Lion’s Share” flags early that this is a record with aspirations beyond the bucolic indie of its predecessors. It was recorded at Bryn Derwen studios in rural Wales, a studio frequented by electronica artists such as Caribou and Four Tet. Still, Smother is not in any way a dance record. Rather, it makes use of synths and sampling software to heighten atmosphere and craft gorgeous, intricate textures – a tactic plainly seen on the elaborate, synthetic lead-off single “Albatross”.

The band have mentioned Talk Talk as a touchstone, and certainly, the mood here feels informed by their The Colour Of Spring in its heady, elemental mix of sensual songs and serene ambience. Indeed, ‘sensual’ is the key. Smother assembles 10 love songs – seven fronted by Thorpe in his fluttering counter-tenor, and three led by his hearty wingman, bassist/vocalist Tom Fleming.

Really, ‘lust songs’ might be more appropriate. Certainly, some more prudish listeners might get a bit of colour round their cheeks at Thorpe’s more risqué lines. “I take you in my mouth like a lion takes its game,” he sings, on “Lion’s Share”. “New squeeze/Take off your chemise/And I’ll do as I please”, goes his opening gambit on the eerie, nocturnal “Plaything”. While Two Dancers’ more caddish moments were leavened by wit and wordplay, here the language is more intimate and direct – albeit still partial to ambitious imagery. “Bed Of Nails”, in a very Wild Beasts moment, imagines the first sexual liaison between Frankenstein author Mary Shelley and her husband Percy, building to an electric climax that awakens her monster, so to speak: “It’s alive!” cries Thorpe.

“Loop The Loop” and “Reach A Bit Further” are the tracks that most resemble Wild Beasts’ early work, built around exquisite guitars and rhythms that adopt a muscular canter. Still, this is plainly the sound of a more focused, mature band: Thorpe’s voice, once a peculiar whinny, has softened nicely, while lush synth washes add soft, watercolour shading. One of the finest surprises, meanwhile, is the quality of Fleming’s songs. As a vocalist, he’s probably been underrated – more conventional than Thorpe, he lacks his floridity of delivery and language – but his turns on the slow-jamming “Deeper” and “Burning” smoulder with barely suppressed passion.

The latter, in particular, is an album high-light, and one of Wild Beasts’ most striking moments to date. Some archaic stringed instrument, a zither perhaps, is sampled and rendered as shimmering electronic chatter, backdrop for a song apparently inspired by TS Eliot’s The Waste Land that depicts love in elemental, destructive terms: “You cast me up into the wind,” he sings, “You shuck my body from its skin…” It is simple in construction, but intense and moving, and a reminder that for all their occasional tendency to feyness and flourish, this is a band with fire in their gut. Smother smoulders. It is not only Wild Beasts’ finest album to date, but one of the best you’re likely to hear all year.
Louis Pattison

Q&A Tom Fleming
How did you find the recording process for this album?
Making and recording Smother was less ‘professional’ than ever. We spent three weeks in a studio in Snowdonia, where we added some full-band recordings and lovely synths to things we’d kept from earlier demos and home recordings. We’ve got into the habit of working quickly, mainly to try to make the distance between the start of an idea and the end of it as small as possible, so the original spark isn’t lost.

Mood-wise, it’s a very sensual record…
Two Dancers was a slightly younger aspect on the same things, I think. This time we felt calmer, less inclined to try to bang the door down. In some ways the record is personal, but no more or less than either of our others, and that ‘I’ in songs should never be trusted, never. We set out to make something beautiful, but quickly realised that beauty is always wrapped up in things that are not beautiful. The arrangement of “Burning” is very sparse, and the sounds are both synthetic and pretty crude, which is for us an important part of our approach to electronics – don’t be tempted by perfection!
INTERVIEW: LOUIS PATTISON